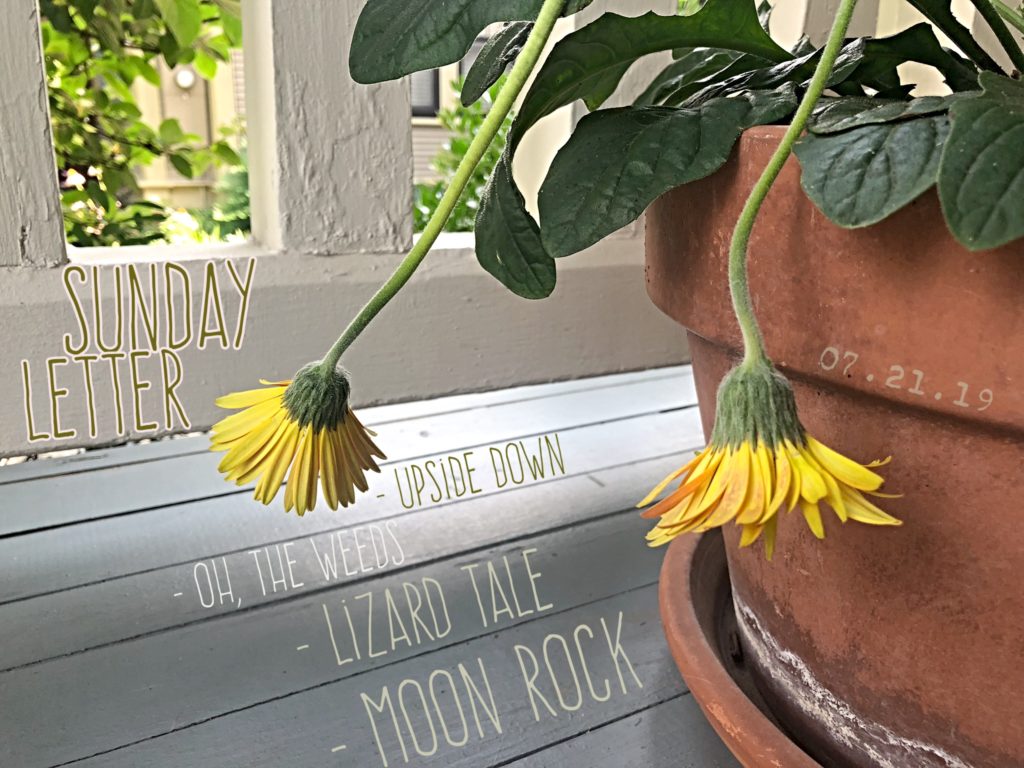 This past week has been hotter than a pepper sprout. Really, it’s the humidity that’s been blanket-thick here where I live.

Just forget about the hairdo.

Thank goodness we went to the lake before this heat and humidity settled in like an old man in a horrible mood.?

Since I wrote my last Sunday Letter, the lives of three of my friends have been turned upside down, completely and shockingly. All three situations break my heart, make me ask WHY???

I know you know this, but it bears repeating. We never know what’s happening behind picket fences, inside minds and hearts and brains, inside bloodstreams and cells. We never know when the proverbial next shoe will drop. This is yet another reminder to be kind. People truly are going through so, so much. People we know. Our friends, neighbors, even those who seem to have it all together. And if you are one who prays, please send up a prayer for my three friends. ?

One thing we can always count on, whether we are vacationing at the lake, grieving in the dark, working behind a desk—the weeds will grow as though there’s no tomorrow. After two weeks of basically ignoring my garden beds, our weeds are thriving in a big way.

The flowers have probably been wondering what happened to me.

But I’m back. For the past week, I’ve re-instituted my dog days of summer garden strategy of pulling one bucket of weeds a day. It’s a large bucket. And, since my highly scientific Fruit Cocktail Experiment didn’t work, every morning I take great satisfaction in drowning a few Japanese beetles along the way (in a different bucket). Seriously though, when I spy several knee high weeds where none were only days ago, I want to set up a game camera and film them growing an inch each a day. I give them credit for toughness and determination. ?

At the lake, we drank our coffee on the porch. Each morning, a small striped lizard, about five inches long, would slip beneath the tiny space under the screen door on one end of the porch, race across the floor, around chair legs and bare feet, and disappear in a crack in the wall on the opposite side of the porch.

Several mornings in a row, she did this.

We began to expect her visit. Watch for her even.

After a night of hunting, she always returned to her home, where I assume she hunkered down during the hot day. (Smart lizard, unlike us).

We named her Lizzie.

So much life all around. It’s good to get away and notice it.?

In honor of the 50th anniversary of the first moon landing, I give you our highly coveted, nearly confiscated picture of a moon rock from the second moon landing. Momma took the picture, evidently breaking the rules of NASA and The Pink Palace Museum in Memphis. A security guard tried to grab her camera. She won that skirmish.

I fictionalized this event in The Accidental Salvation of Gracie Lee, but as you can see, that particular scene in the book is based on true events. It was 1971 on the day of my 9th birthday, back when we were enamored with space and astronauts and the possibility of life on other planets.

No, I never really thought about growing up to become an astronaut, (could girls be astronauts?), but boy-hidy, what I wouldn’t have given to have been a genie in a bottle. Stay with me here…

Preferably, I wanted to be THE I Dream of Jeannie genie, of course, who was discovered by astronaut Major Nelson after splashdown. Yes, at the time, I imagined living happily ever after in sultry hot Cocoa Beach, my bottle tucked away on a bookshelf where I could escape from time to time and clean house with the quick blink of my eyes.

Not sure what that says about me.

Times were different, that’s for sure. I Dream of Jeannie was tied for my #1 favorite after school television show.

Does anyone else associate astronauts with genies? ?

We need to roast marshmallows. We’ve got 500.

After bathing suit shopping at Dillard’s on Thursday:

If I die before I wear these bathing suits, give them to some fat lady on my street.