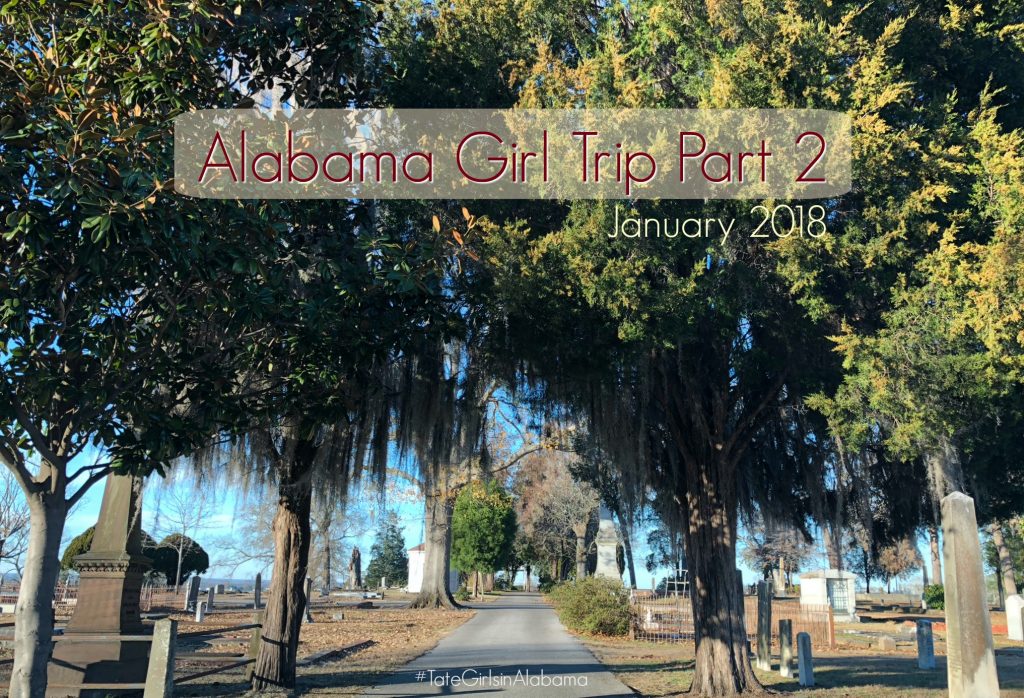 Hey there! If you’ve been waiting for Part Two of my recent Alabama Girl Trip, your wait is over. If you missed Part 1, click HERE to catch up. (Part 1 contains highlights of Days 1-3 including Rosa Parks, live jazz, and an accidental train yard adventure. Among other things.)

Question: What should one do on Sunday morning in Montgomery, Alabama? (It’s a no brainer. Especially on MLK weekend.) Answer: Attend church services at Dexter Avenue King Memorial Baptist where Martin Luther King served as pastor. THIS was the cherry on top of an already decadent devil’s food cupcake.

No, we didn’t have Sunday clothes with us, but that sort of thing doesn’t matter in the house of the Lord. We layered up in our cleanest dirty jeans, heavy coats, gloves and hats (it was COLD) and walked to the church house a few blocks from our hotel. 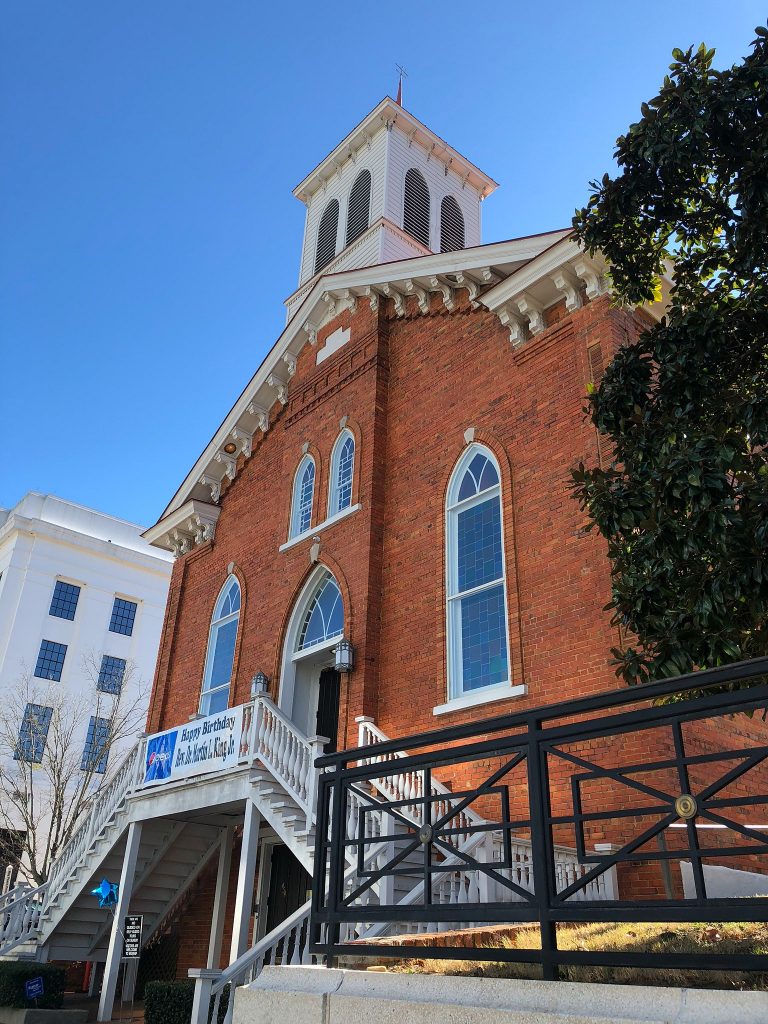 Seriously, what a hallowed place. Dreamy light filtered through panes of stained glass. The old pews and hymnals, the welcoming congregation, the pastor who brought a thoughtful, humorous sermon—it was a Sunday morning I won’t soon forget, and a reminder that I have a soft spot for small churches.

Dexter Avenue King Memorial Baptist was founded in 1877 in a slave trader’s pen. (Named Dexter after Montgomery’s founder, Andrew Dexter.) In 1879, the congregation purchased a lot for $270.00 at the corner of Dexter and Decatur, a stone’s throw from the State Capitol. This became the church’s permanent location. Dr. King, pastor from 1954 – 1960, directed the Montgomery Bus Boycott from his office downstairs. The building was designated a national historic landmark in 1974.

Do you remember the song Sweet, Sweet Spirit? Oh my gosh, it’s one of my favorite hymns, and although we didn’t sing it that morning ( we sang others), I felt the words of that hymn inside me when I left. Afterward, we walked over to the State Capitol and admired the numerous statues, gorgeous grounds, and incredible building. Jefferson Davis was inaugurated on the west portico steps (a brass star marks the spot). In 1965, the Selma to Montgomery march ended in front of the building. Afterward, Martin Luther King made his “How Long, Not Long” speech from the Capitol steps.

Today, even though crazy politics seems to brew beneath the dome, the building and grounds are a must-see Montgomery stop. 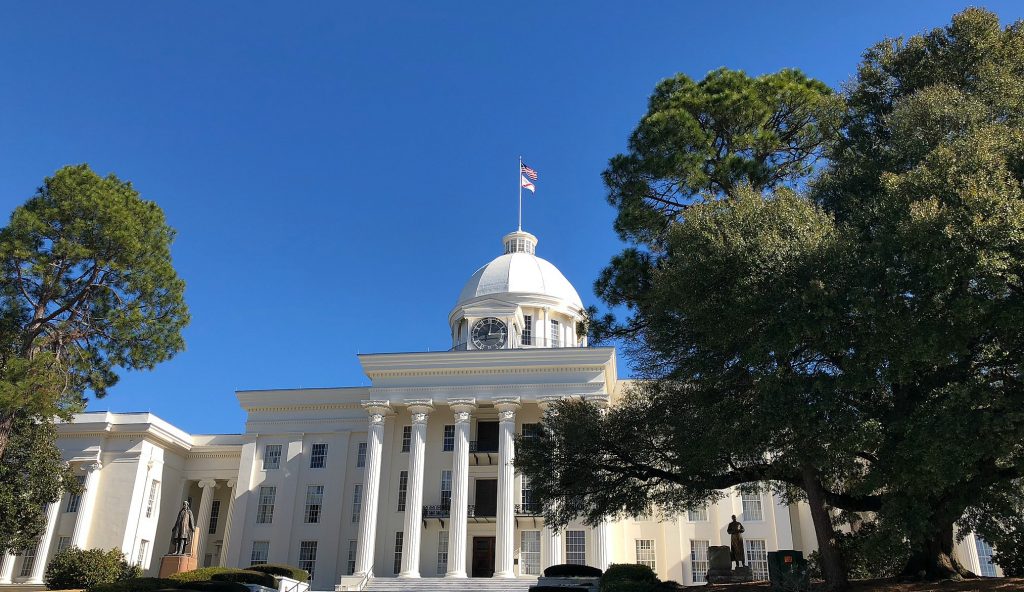 I’ve long maintained the best way to learn a place is to walk it. During the afternoon, we walked over seven miles taking in the architecture of old homes and storefronts. We studied the Montgomery night sky (during broad daylight) at the W. A. Gayle Planetarium. In Montgomery, history seeps from every crack and crevice.

How about this? Mrs. J. Dowe Sr. lived in this home back at the turn of the center when folks forged their names onto wrought iron front gates. 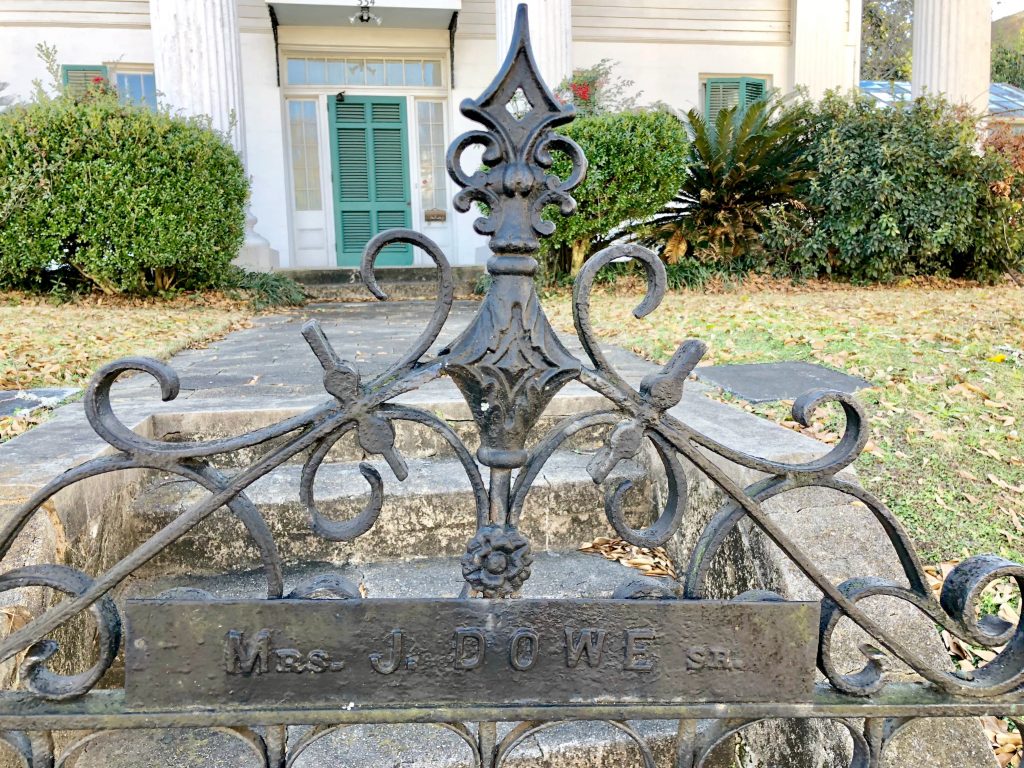 Nothing to see here. Just the site of the first American open heart surgery performed in a nondescript doctor’s office on a side street. Let this sink in during February, American Heart Month… Before dinner, we did a little cemetery exploring at Oak Grove Cemetery. The cemetery “opened” in 1817 after Andrew Dexter donated land. The cemetery now spans 140 acres and is the final resting ground for notable Alabama statesmen, hanged felons, regular folks, unknown Civil War soldiers, and, Hank Williams, Sr., who doesn’t fit into any of those categories. 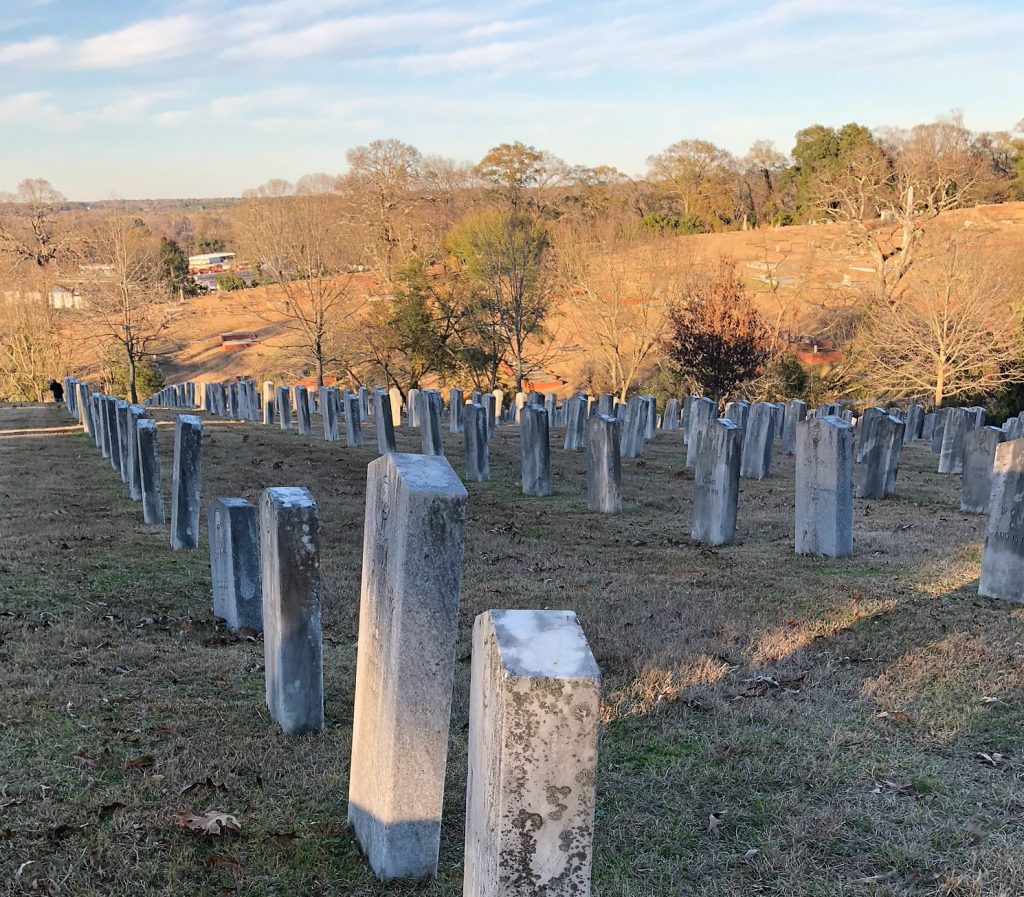 Moss hanging from huge trees gets me every time. We hit the jackpot with dinner at Capitol Oyster Bar. This hole-in-the-wall has serious, off-the-beaten-path Alabama River water views, spectacular at sunset. Driving there, you’ll worry you’re on some wild goose chase to a hunting camp on one of the islands known-only-to-locals in the Mississippi River. But if you like laid back and casual with fresh seafood and live music don’t miss this place. If you don’t, you probably won’t fully appreciate Montgomery. 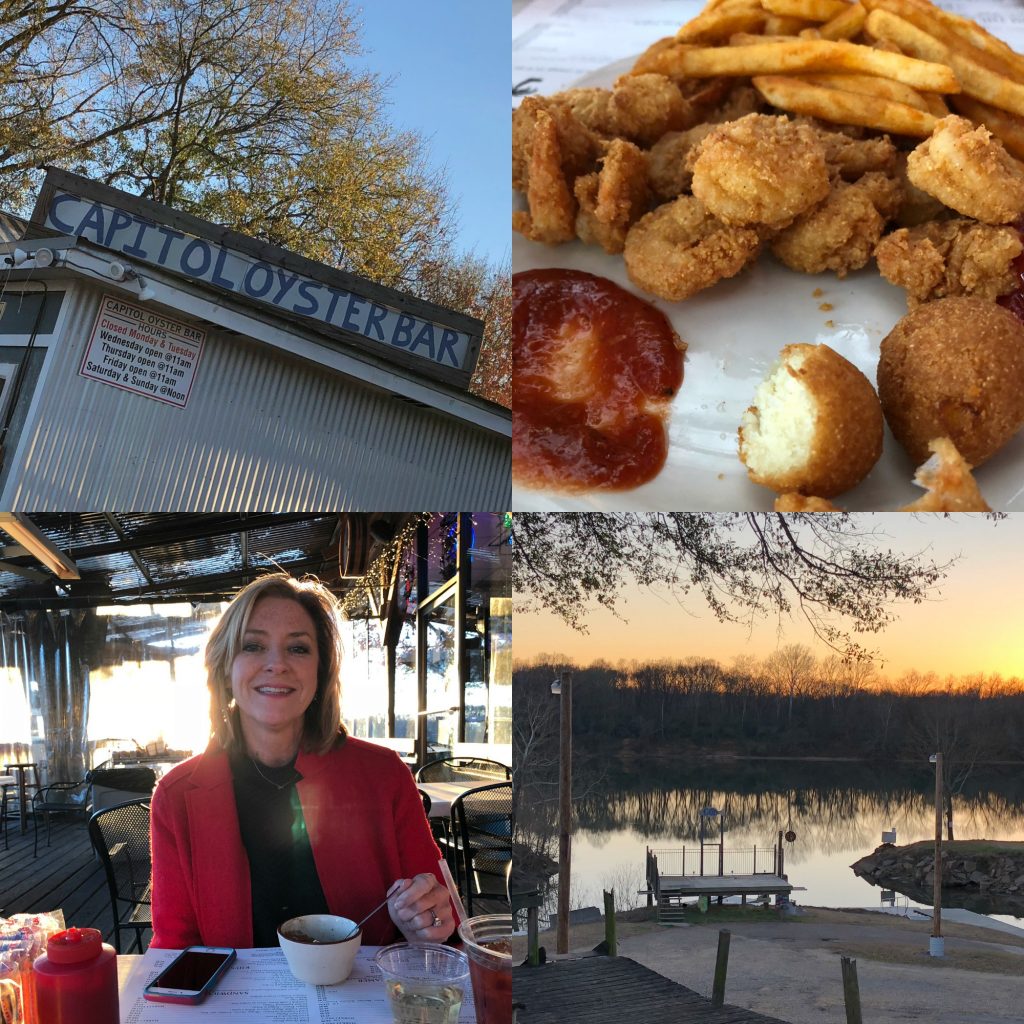 As a bonafide old house nerd, one of my absolute favorite things to do in any city is tour historic homes. (During my last trip to Montgomery, I toured the home of F. Scott and Zelda Fitzgerald. I highly recommend the Fitzgerald home/museum especially if you are a combination old house nerd AND bibliophile.)

On the last morning of our Alabama Girl Trip Part 2, we had just enough time to tour the First White House of the Confederacy before fetching Momma and heading to the airport. 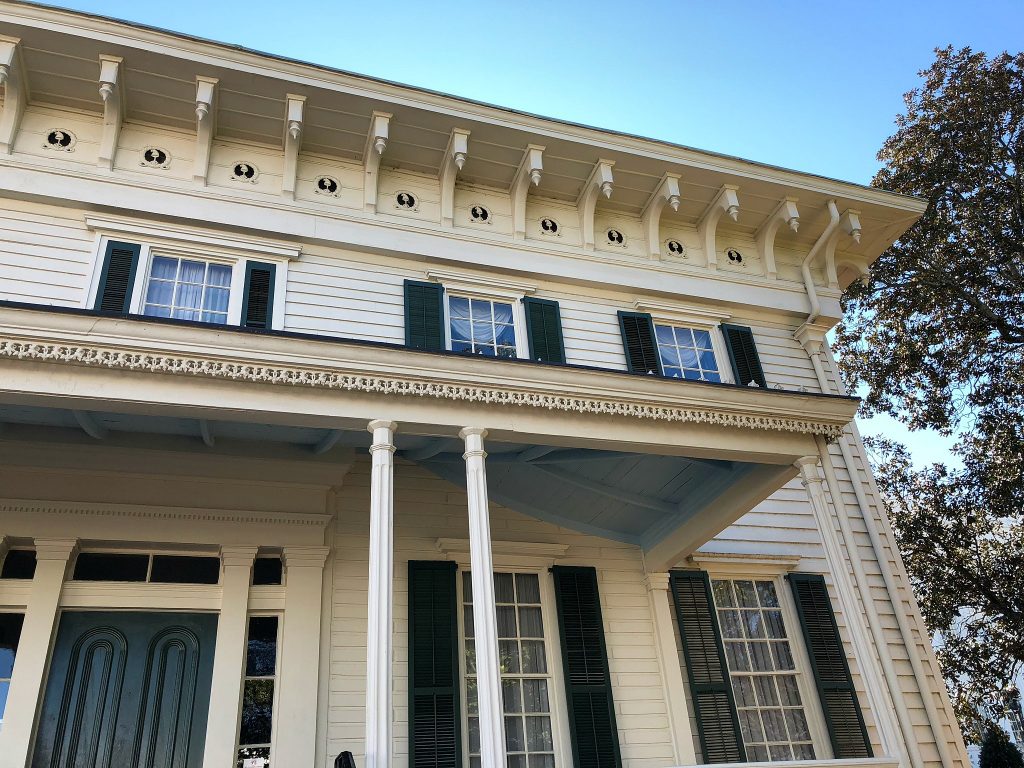 A teeny tiny history refresher: In 1860, after Lincoln was inaugurated as the 16th President of the United States, seven states (South Carolina, Mississippi, Florida, Georgia, Louisiana, Texas, and Alabama) seceded from the Union. Soon after, Jefferson Davis was elected first President of the Confederate States of America.

This gorgeous home (built by an ancestor of Zelda Fitzgerald) served as the White House of the Confederacy until the capitol was moved to Richmond. 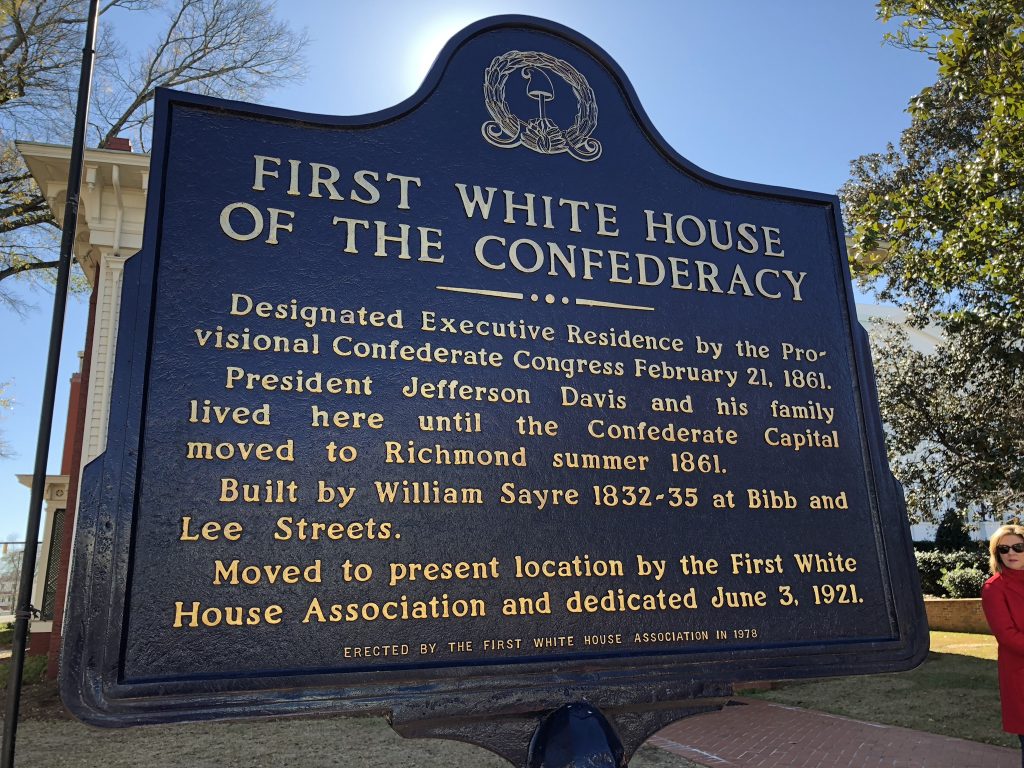 If this old house could talk you might not like it’s memories, but what a great piece of American history filled with original furniture, memorabilia, and noteworthy artifacts. Our enthusiastic tour guide was extremely knowledgable. The structure itself is a fine example of Federal-style craftsmanship. While lots of people today might refuse to visit this place, maybe even protest out front, I happen to believe history is history even with all its warts and bruises. And we can all learn from it.

Look at this incredible quilt. Known as the “Gunboat Quilt”, it was raffled off numerous times during the Civil War to raise money for a gunboat. The fact that it is still in such good shape is nothing short of miraculous to me. 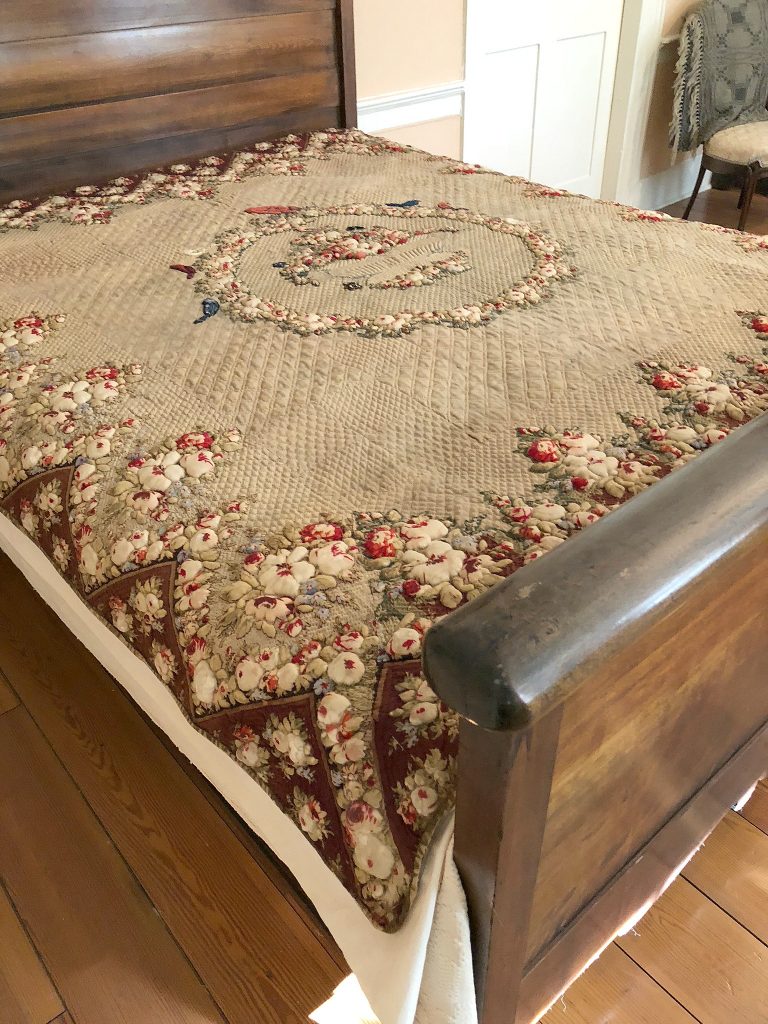 It’s true. All good things must invariably end. We headed back to the airport and said goodbye to Alabama until next time.