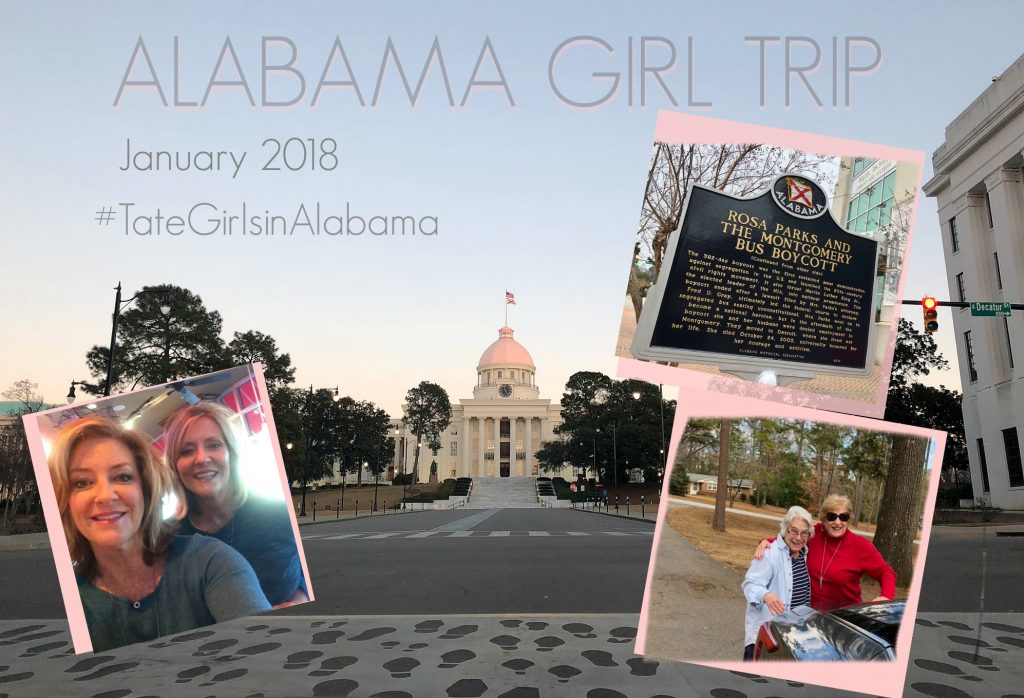 I’m blogging about our recent Alabama Girl Trip not because I think everyone wants to hear every little detail but because later, when I can’t remember beans about it, I can read this post and say, “Oh, yeah, that was sooooo much fun. We should do it again!”

That’s one of the long-term benefits of blogging.?

My sister, Staci, and I decided this year instead of giving Momma another sweater she didn’t need, we would give her an experience. A trip to visit her college friend who lives in Wetumpka, Alabama. Momma and Carlene have been friends since 1955. They roomed together at Caraway Hall until graduating from Arkansas Tech in 1959 (then known as Arkansas Polytechnic College).

Now they live 375 miles apart. They see each other once a year at Tech homecoming. No matter the distance, they text, talk, and email almost every night. They even watch certain television shows and football games together via iPads / computers. Because neither drives long distances anymore, getting together is difficult. (Click HERE to read more about Momma, Carlene, and the “Girls of Caraway Hall”. Someone should write a book about them.)

This trip was the perfect gift for ALL of us.

The When and Where:

Staci, Momma and I flew direct from Dallas to Montgomery, rented a car, and dropped Momma off at Carlene’s house (about 20 minutes away). Then, Staci and I had ourselves a five-day sister trip with no agenda.

It just so happened that we were in Montgomery over Martin Luther King weekend. And Montgomery just so happens to be the birthplace of civil rights. Even though I chose the date and cleared it with Carlene (it was a surprise for Momma), I didn’t choose the date because of MLK Day.

By the way, we did our best to protect ourselves from the flu. Like most of the United States, Dallas has been hit hard with the flu, and according to a news report I read, twenty percent of the people flying over the holidays were carrying the flu virus. (Momma’s nurse friend, Shelley, gave us masks!)

Hey, whatever it takes. 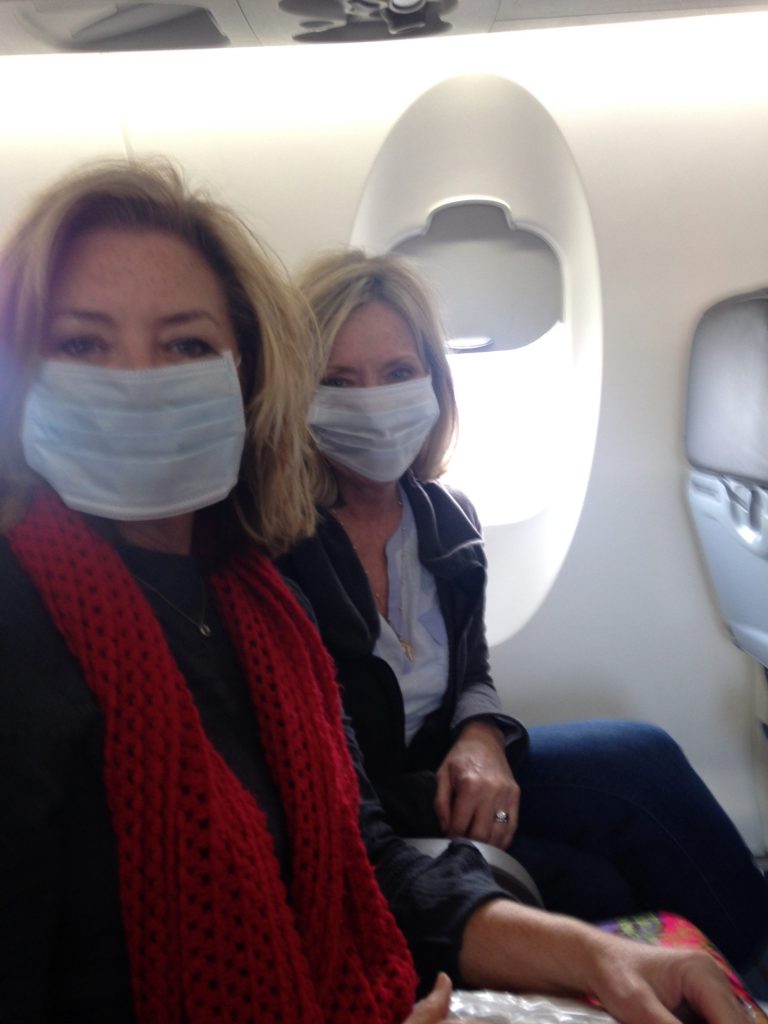 (Yes, there’s much to report, so I’m breaking this into two parts…)

Day One: Oh my word, after northwest Arkansas’s recent frigid weather, Alabama’s seventy-two degree temperature felt positively Caribbean. We wasted not a minute, loaded up our Nissan rental car and whisked ourselves away to downtown Montgomery for al fresco lunch at SaZa. Are you kidding me? Until I sat on the patio with a warm breeze, I don’t think I realized how cold I’d been lately.

After lunch, we delivered Momma to Carlene (a sweet reunion!) and checked into our hotel. We stayed at the Hampton Inn Downtown (selected site unseen) which turned out to be the ideal location for our activities. Friendly staff, free breakfast and WIFI, and a fully equipped gym (or so we were told) all contained within a beautifully renovated historic building—once the Greystone Hotel built in 1929.

You know how I love old buildings.

LOOK at this ceiling. 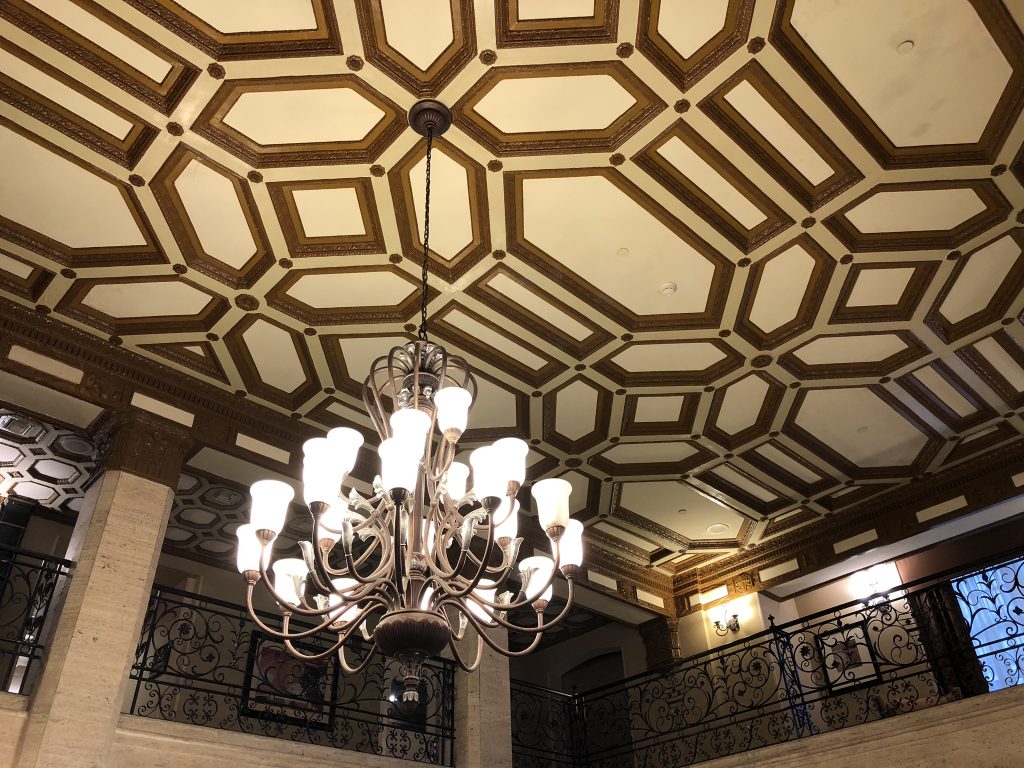 We got a bit hysterical every time the elevator doors closed because—well, look at this picture on the Hampton Inn elevator door. Bad selfie, but you get the jest of it. #twins 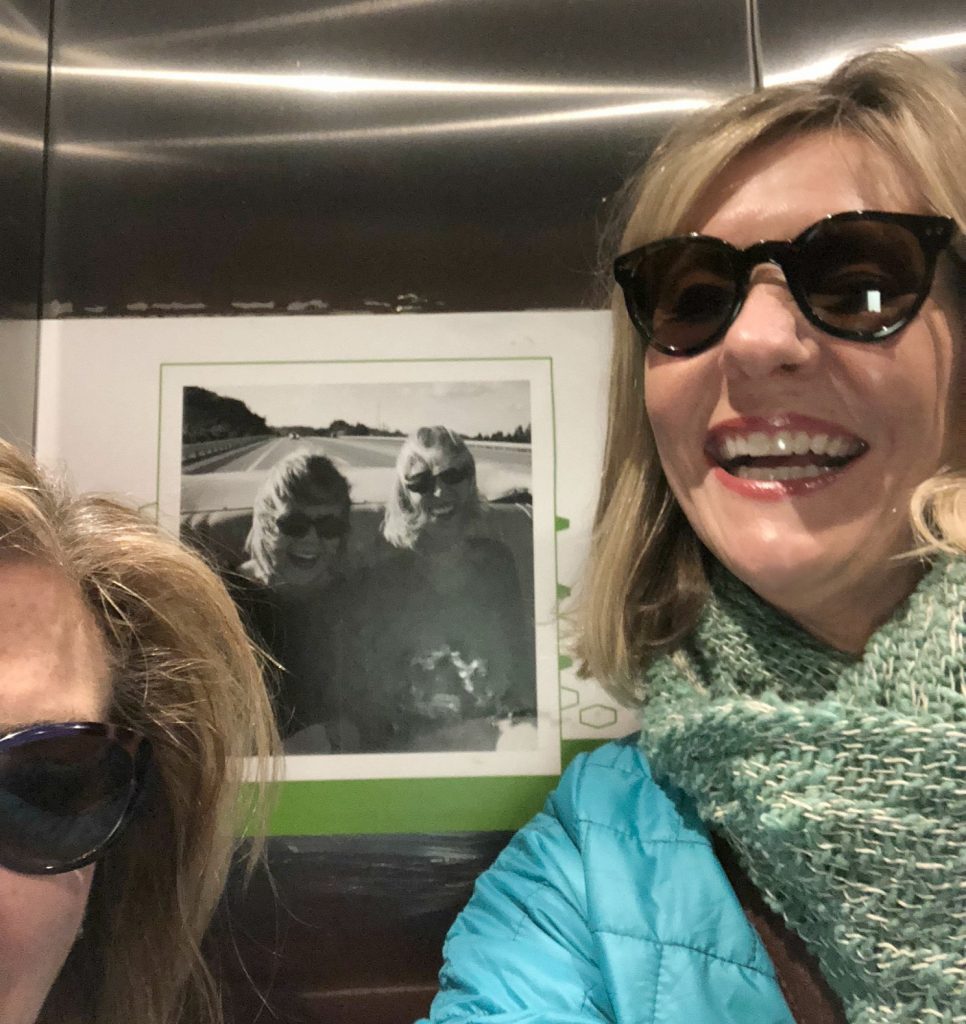 Night One: We walked half a block and enjoyed happy hour priced chardonnay, fish tacos, and live jazz at The Exchange, an outdoor lounge/bar (part of the Renaissance Montgomery Hotel and Convention Center). Again, for an early January evening, the warm temps were a much appreciated treat.

Happy hour extended beyond happy hour, if you know what I mean, and we called our first day / night a great success. 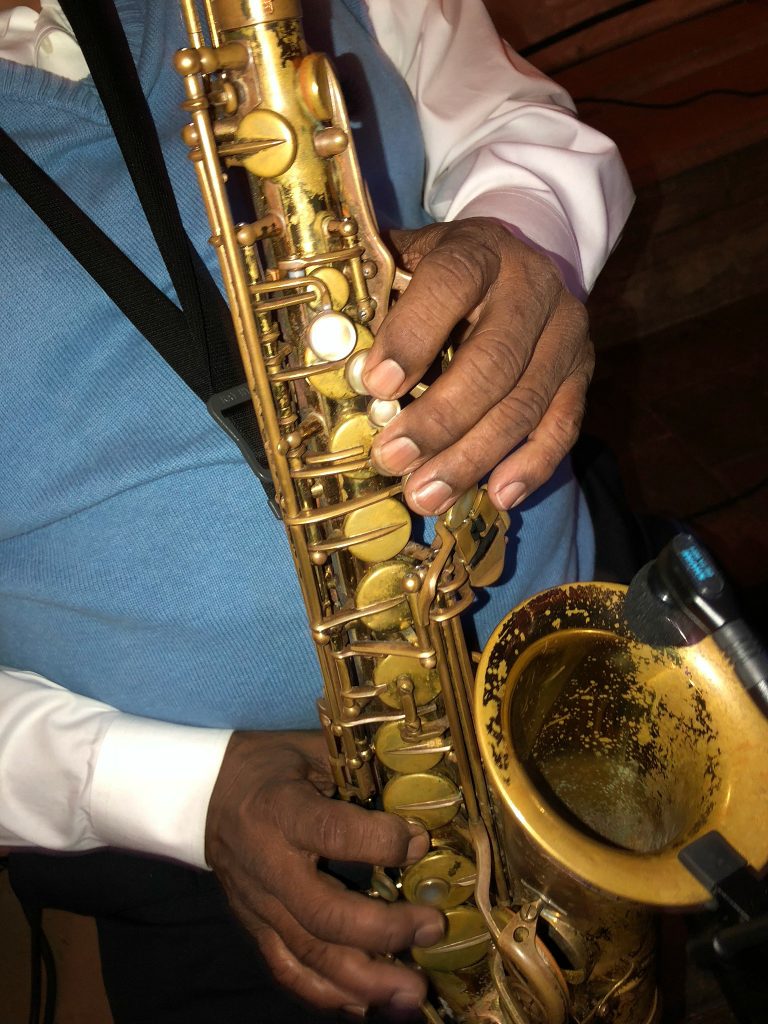 Day Two: The cold front found us bringing wind and a bit of rain. Farm girls come prepared though. We bundled up and walked the few blocks to the Rosa Parks Museum. Last year when I traveled to Montgomery (as part of my Deep South Road Trip), the museum was closed during my only available touring time. I wasn’t going to miss it this time.

If you only have two hours to spend in Montgomery, spend it with Rosa Parks.

The Rosa Parks Museum is located at the site where Parks was arrested. The museum is interactive, informative, and incredibly humbling. On display—historically significant artifacts including her original fingerprints taken by the Montgomery police and a Montgomery city bus from the 1955 fleet.

Soooooo, on December 1, 1955, when Momma and Carlene were having the time of their lives as students at Arkansas Tech, Rosa Parks refused to give up her seat. The fact that this happened not that long ago, in my mother’s lifetime, only seven years before I was born, in our world, is unfathomable, ridiculous, atrocious to me.

I have no idea what’s being taught in history classes today, but back in my day I’m pretty sure Rosa Parks was glossed over in a couple of paragraphs. I mean, to get from Mesopotamia to the Vietnam War, we had to move super fast. There was no time to dig in to real issues.

In case you don’t know the details: Rosa Parks boarded a city bus after working a full day as a seamstress in a Montgomery department store. She sat in the first row of the colored section which was located in the middle of the bus. When the front, white section of the bus became full and a white man was forced to stand, the bus driver demanded Parks and three other people in her row give up their seats and move further back.

The three other people moved.

Rosa Parks refused. She was removed from the bus and arrested.

Later, she was asked if the reason she wouldn’t give up her seat was because she was tired from working all day.

She said, “The only tired I was, was tired of giving in.”

We were emotionally exhausted after the Rosa Parks Museum so we took some time to regroup (i.e. eat lunch). Later that afternoon, Staci and I visited the historic Union Square building which houses the Montgomery Tourist Center and a couple of cute retail shops. 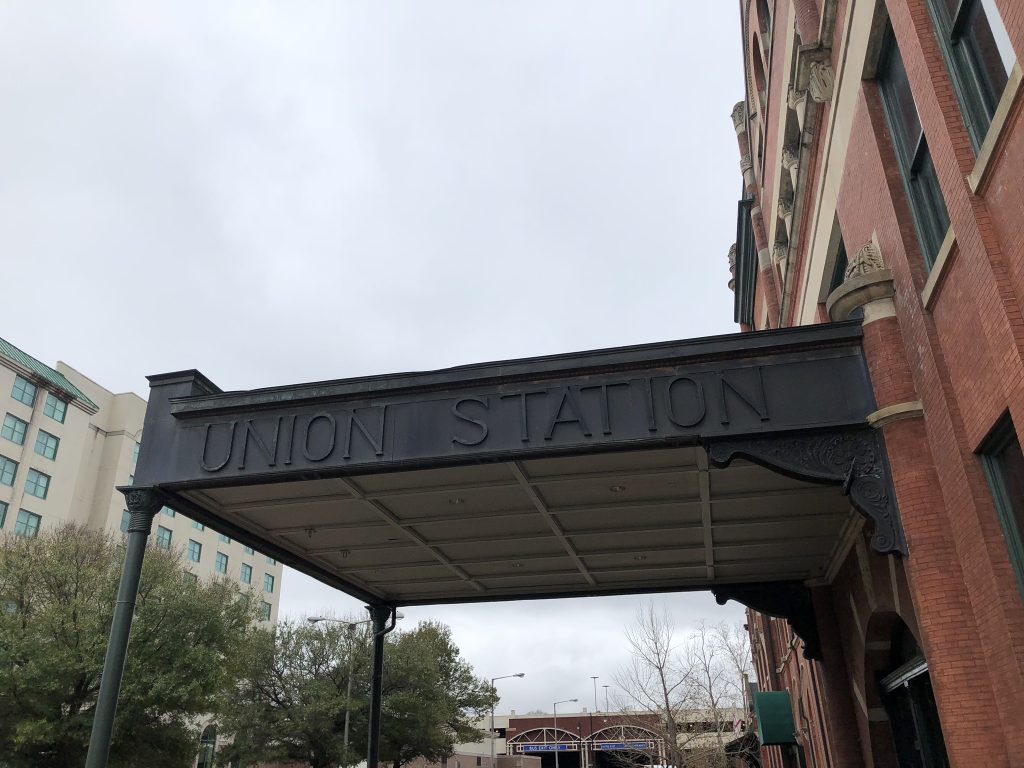 I bought this pot holder made just for Gracie Lee, don’t you think? 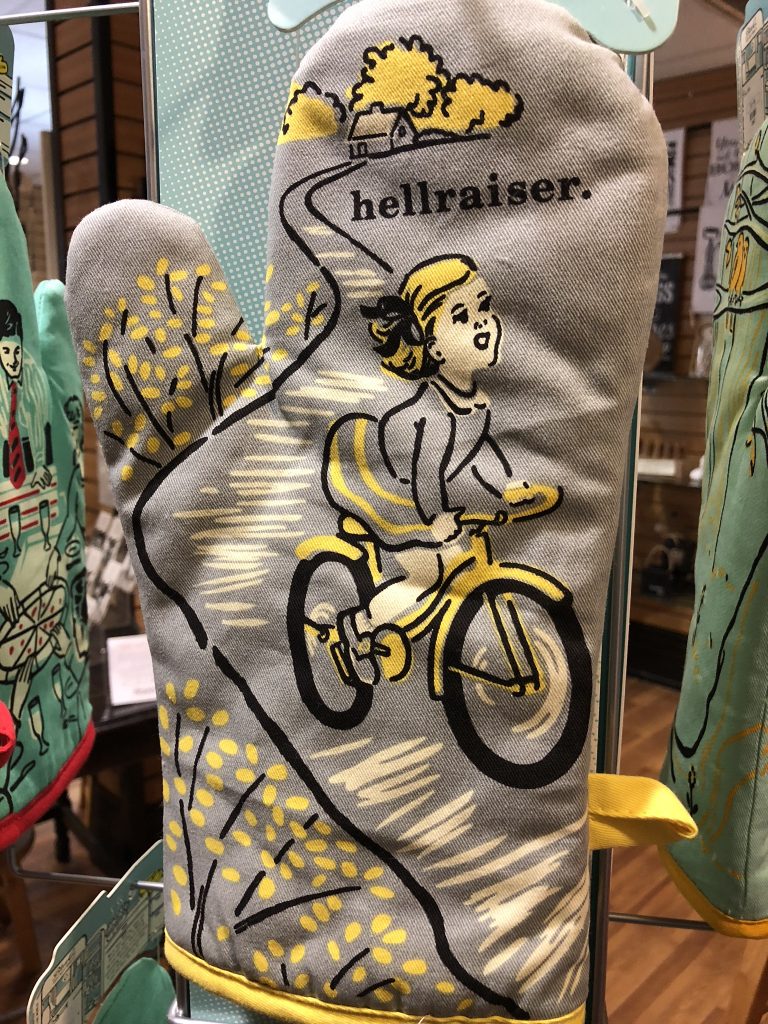 We strolled along the Alabama riverfront. Brrrr! The temperature continued to drop. We had the entire riverfront to ourselves. 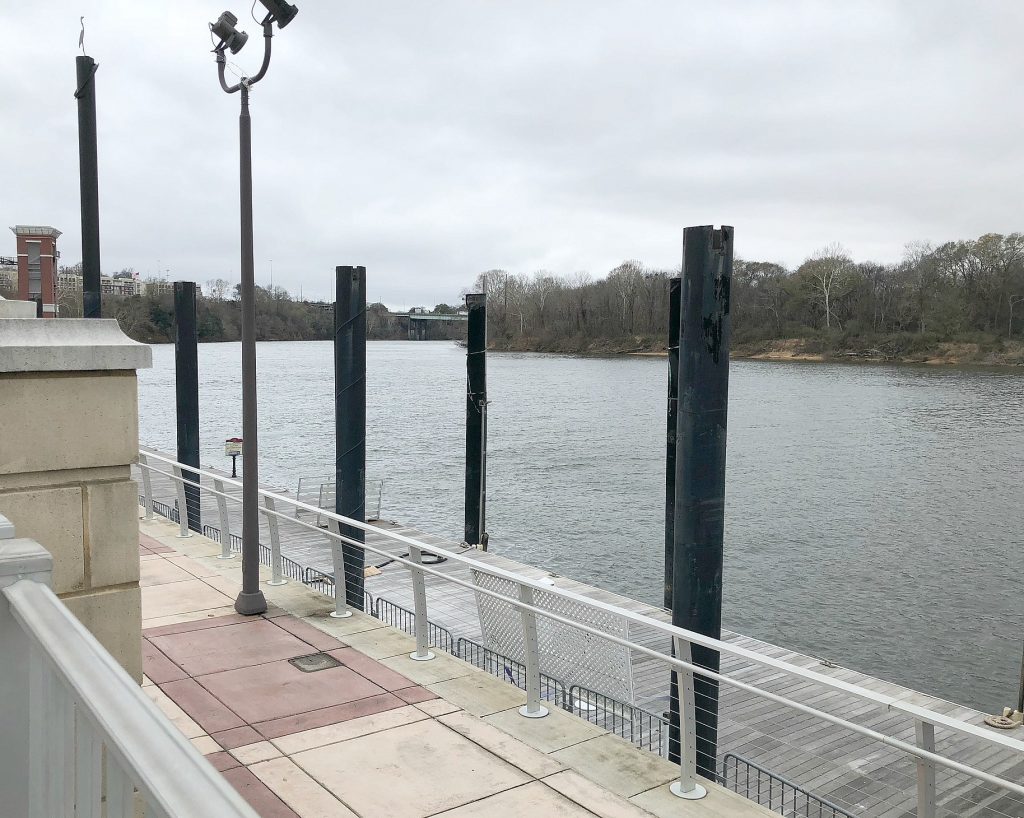 Night Two: We saw Three Billboards Outside Ebbing, Missouri. In the same way we had the Alabama riverfront to ourselves, we had the entire theatre to ourselves.

Look at this photo of Staci.

I’m calling it Woman in Red Coat. Our bag of popcorn sparkles like a Christmas present. And look, there seems to be a bottle of Windex one row down? 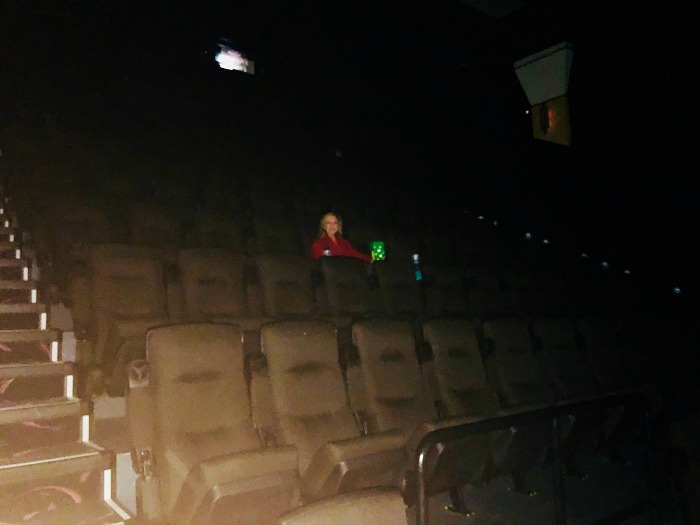 Directly across the street from our hotel, the Montgomery Spa had been staring at us for two days. Why would a spa be so close if we weren’t meant to partake? We took it as a sign, booked facials, and spent half a day in Alabama heaven. We lounged in the “quiet room” before and after our treatment. We took advantage of other complementary services such as relaxing in the steaming, bubbling hot tub while sipping wine. We used all the spa’s great Aveda products after showering. Seriously, when we floated back across the street, we didn’t do much else before dinner.

Oh, we did stop in at the Hank Williams Museum gift shop (next to our hotel) for appropriate “Hey, Good Lookin'” Souvenirs.

Night Three:  Staci and I drove back to Wetumka and met Momma, Carlene, and her son, Gary, at Our Place for dinner. Carlene and Gary took me to Our Place when I was in Montgomery for the Alabama Book Festival. So I knew we were in for a treat. It was just as yummy as I remembered. I was still so relaxed from the spa, I failed to photograph my dinner.

On the way back, Staci and I had a full-blown twilight zone experience. We were almost back to our hotel (only two minutes away according to GPS), when we found ourselves driving over train track after train track (at least four in the stretch of a quarter mile). AND THEN the railroad crossing lights flashed, we stopped, and soon realized we were trapped on a stretch of highway between TWO stopped trains (or one very long train that criss-crossed two intersections, if you can imagine). Two minutes turned into forty-five.

Reminder to one and all: If you “sort of” need to pee when you leave a restaurant but think “oh the drive is only twenty minutes and I can make it” USE THE BATHROOM BEFORE YOU LEAVE IN CASE YOU BECOME TRAPPED IN A TRAIN YARD. (Country girl skills come in handy in this sort of situation…) 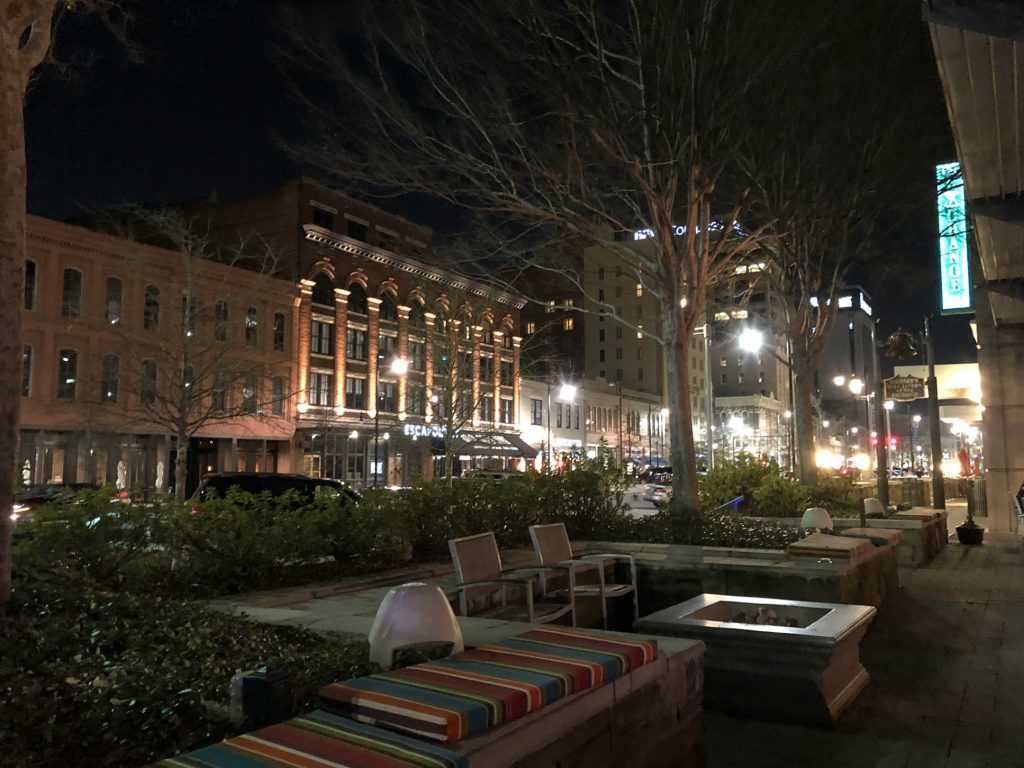