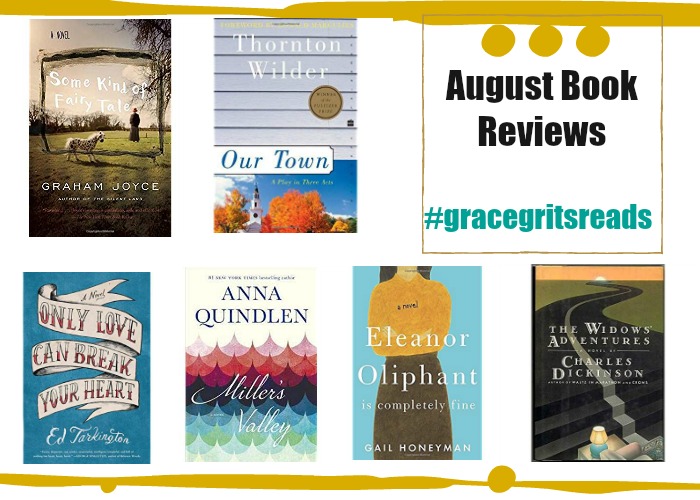 And with this post of August Book Reviews, I’m saying goodbye to summer reading 2017. (Can you believe today is the last day of August?) I enjoyed six books during operation broken wrist. Really, these books provided sanity and escape. And while they are wildly different, they all involve relationship and/or family. From fantasy to possibly the greatest American play of all time, which will you add to your September stack?

The Widows’ Adventures
by Charles Dickinson

My sister-in-law told me about this book and loaned me her copy. Thank you, Paula! If Thelma & Louise met The Bucket List you’d have this witty tale. Imagine two elderly sisters driving from Chicago to Los Angeles. One is blind. The other has never driven in her life. The blind sister drives while the other navigates. They take the back roads during the wee hours. Yes, it’s absurd and hilarious. Would make an entertaining movie.
This book made me: think about all the fabulous books written years and years ago still waiting to be discovered. (This book was published in 1989.)
Favorite line: “If I’m driving and you’re drunk, does that make me a drunken driver?”

Only Love Can Break Your Heart
by Ed Tarkington

I heard about this book via KUAR’s Arts & Letters radio show (wonderful, by the way). This is a coming of age story set in 1977 told from a boy’s point of view. Tarkington is a smooth storyteller who can turn a phrase. If you like nostalgia, seventies music, and authentic small town life with family drama, you’ll like this one.
This book made me: crank up Neil Young.
Favorite line: “Love can make people do terrible things.”

This story moved a bit like a lazy river, quietly, with nuances that felt real yet not full of in-your-face wild rapids. Also a coming of age story, this one is told from the perspective of a strong female protagonist. It’s about the tug of home and the importance of land as Miller’s Valley is under threat of being flooded to create a water reservoir. It’s about family secrets and bonds. While I wouldn’t call it a hot page-turner, I found it to be compelling in a real-life way.
This book made me: think of all the family homes and land taken when Norfork Lake was formed.
Favorite Line: “But no one ever leaves the town where they grew up, not really, even if they go.”

Our Town
by Thornton Wilder

Where have I been? I’m embarrassed to admit I’ve never read Our Town. I’ve never seen a live or television production of Our Town. In other words, I knew nothing about it. What a JEWEL. Wilder depicts life in such an ordinary way that it feels extraordinary and timeless, and he does it in so few words. In a Capra-esque spirit, it reminded me of It’s a Wonderful Life. No wonder Wilder won a Pulitzer for it.
This book made me: think about Keiser, my town. It made me want to re-read it immediately. To study it. To turn my book into a play. Maybe I will.
Favorite line: “Choose the least important day in your life. It will be important enough.”

Last month I read The Silent Land by Joyce. I liked it well enough that I wanted to read more from this author. This story hooked me from the back cover. The premise: after missing and presumed dead for nearly twenty years, Tara returns home on Christmas Day shocking her brother, parents, and her boyfriend. Where has she been? That’s where fantasy comes in. If you can allow yourself to get lost in the possibility of another realm, something incredible and otherworldly, you’ll become lost and mesmerized by this tale. If you see everything in black and white and have the imagination of a rock, skip it. Oh, and there’s sex.
This book made me: entertained and intrigued. The author cleverly began every chapter with excerpts from poetry, trial transcripts, and books having to do with the mythical.
Favorite Line: “All I ask is that for one second you open up your mind, for one second, and allow the possibility for that one second that I might be telling you that something extraordinary happened. Really happened. Then after that one second you can go back to thinking I’m a liar or I’m insane or whatever you want. . . There is a veil to this world, thin as smoke, and it draws back occasionally, and when it does we can see incredible things.”

Eleanor is a thirty-year-old accounts receivable clerk with no social skills and a super strict routine. She drinks too much vodka, wastes too much effort talking to her horrendous mummy, and takes everything oh so literally. (She would hate Some Kind of Fairy Tale.) Eleanor’s story is sad. She goes through the motions of her life barely scratching the surface, yet for the most part, this book is uplifting and entertaining. With the help of Eleanor’s new friend, Raymond, she learns to live “for real” and not just inside herself. I listened to the Audible version. The narrator’s voice reminded me of Holly Golightly. Bonus!
This book made me: think about lonely people who simply need a friend or a kind word.
Favorite Line: “The gilded confines of the beauty hall were not my preferred habitat. Like the chicken that had laid the eggs for my sandwich, I was more of a free-range creature.”

That’s it for August! Literally…

Musical Pairing:
Crosby Stills Nash and Young, Only Love Can Break Your Heart

If you missed any of my previous book reviews catch up by clicking on the links below: