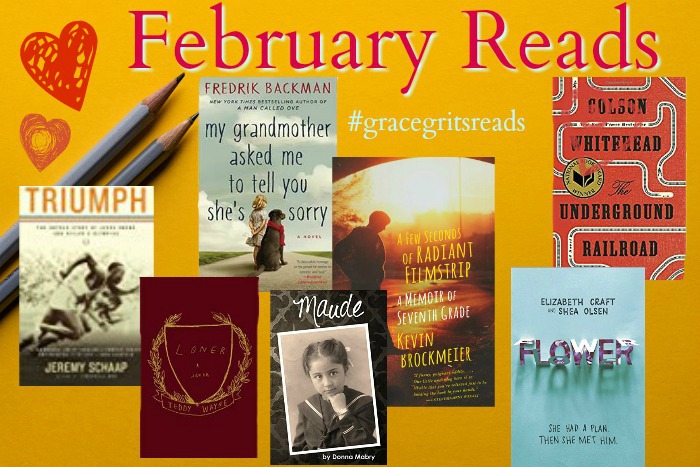 What did you read in February? My choices ran the gamut from fluffy young adult to middle school memoir to informative historical. I journeyed from Kennett, Missouri to the Kingdom of Miamas. As with any trip, some were more enjoyable than others. Each offered something. (In order of how I read them.) Oh my goodness. This sweet, magical tale is about a little girl and her granny, about savoring fairy tales, protecting memories, and cherishing relationships. It’s about the importance of dreaming and how grandmothers balance everything long after they are gone. The story centers around seven-year-old Elsa who sets out to deliver a series of apology letters left behind by her deceased granny. The story reminds us that being different is the best way to be. Author Fredrik Backman also wrote A Man Called Ove which was one of the most engaging books I read in 2016. I enjoyed My Grandmother just as much but in a completely different way.

This Book Made Me: laugh and cry and dig deep into my own memories. It made me think about family members who are no longer here yet still all around. Whoa. This book is dark and intriguing, an interesting character study of a brilliant yet socially awkward Harvard freshman who goes after the girl he wants. Nothing is as it seems. Loner reads like a memoir, creeped me out more than a little, yet I could not put it down.

Favorite Line: “All hopes I had of a roommate who would help upgrade me to a higher social stratum snagged on the gleaming barnacles of Steven’s orthodontia.”

A Few Seconds of Radiant Filmstrip:
A Memoir of Seventh Grade
by Kevin Brockmeier I jumped right into this short memoir by Arkansas author, Kevin Brockmeier and savored it like a summer rain. Don’t expect a thrilling plot line or story arc, but instead appreciate it for what it is—a year “in the life” sort of poignant narrative about seventh grade, a year filled with pimples and hormones and that’s gripping enough. Oh, the cringeworthy angst.

This Book Made Me: want to binge watch The Wonder Years.

Favorite Line: “He feels the way he used to feel passing love notes to girls in elementary school. Do you like me? the notes always read. Check yes or no. But he is older now and his question is older, too, not Do you like me? but Shouldn’t someone?”

Triumph: The Untold Story of Jesse Owens
and Hitler’s Olympics
by Jeremy Schaap I read Triumph for book club. The book is well researched and provides not only the history of the Olympics and WWII before America’s involvement, but it also paints an accurate portrait of racial prejudice and civil rights in Germany and the United States. Jesse Owens was the fastest man in America yet he was still considered inferior because of his race. I believe this should be required reading in schools but it’s probably on the banned list.

This Book Made Me: wonder what sort of records Owens would have broken if he’d had today’s training and equipment.

The Underground Railroad
by Colson Whitehead In the beginning, I loved this book. Brilliant, I said. Word choices, absolutely spot-on. I imagine the description of slave life to be extremely realistic. BUT THEN. Why oh why oh why did the author take such liberties with history? For example, the Underground Railroad was described as an actual subterranean railroad. The book, classified as historical fiction on Amazon, read as such until the “railroad” took on characteristics similar to the Night Bus in J. K. Rowling’s world. By the time this happened, I had become completely mesmerized by the story and main characters, Cora and Caesar. So I felt like a rug had been pulled from beneath me. Wasn’t the true history of the underground railroad compelling enough without making it fantastical? This and other historical inaccuracies could be extremely confusing to someone who doesn’t know American history. At one point, it made me question my own.

This Book Made Me: confused.

Favorite Line: “The only way to know how long you are lost in the darkness is to be saved from it.” After reading back-to-back books involving serious topics, I decided something fluffy was in order. So I listened to Flower, which I chose because I like author Elizabeth Craft who co-hosts the Happier podcast with Gretchen Rubin. Although young adult is not my typical genre, I read a few each year because a) I was once one, b) I like variety, c) I want to know what’s being published and what popular looks like, and d) it helps keeps me young.☺ Bottomline, I’m not young. I think my niece and all her friends would enjoy this book. It’s a modern day sort of Cinderella story and certainly served to cleanse my palette from the atrocities of Hitler’s Olympics and slavery. And I enjoyed the first part of the story, but by the end I discovered I didn’t much care about either of the main characters even though the male character’s name was Tate. “Strong female turns weak over cute guy.” Um, no thank you. I’ll stick with the podcast.

This Book Made Me: want to each lime sherbet.

Favorite Line: “If I don’t know the worst thing about you, how can I ever really care about you?” This story spans the entire life of a lady named Maude (as told by her granddaughter) from the early 1900s to the late 1960s. The writing is plainspoken and the story progresses in narrative style, nothing fancy, and often more “tell” than “show”. Even so, it felt real and I connected to the character as though Maude might have been one of my aunts or grandmother. This book was part history lesson, too, as Maude lived through the Great Influenza, The Great Depression, both world wars, and the birth of five children with little to no assistance and zero pain meds. When women’s suffrage passed, Maude proudly dressed in her Sunday best and cast her vote among disapproving men. Author friends take note: this book, which was #1 on the Amazon best seller list for weeks as well as the WSJ Top Ten list, was published via CreateSpace.

This Book Made Me: think about how fortunate I am to be a woman today, and it made me sad when it ended because Maude had become a companion to me.

That’s a wrap for February reads. What should I add to my March list?