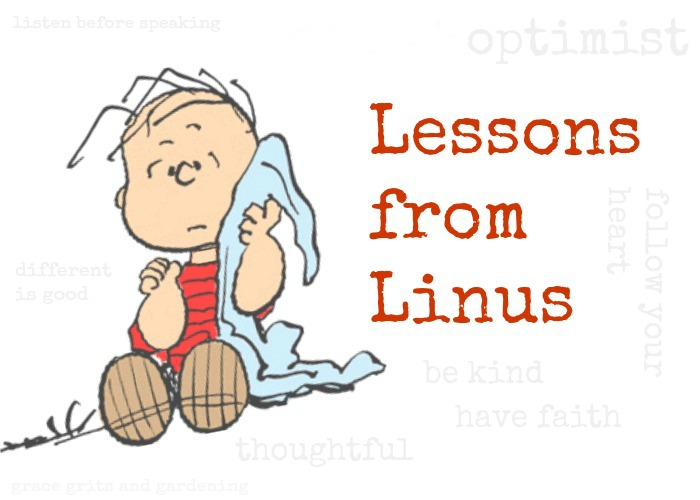 Linus said there are three things we should never talk about—politics, religion, and the Great Pumpkin. Woo boy. I think the only thing we can safely talk about right now is the Great Pumpkin. This is the ideal time to take a deep breath and remember those childhood lessons from Linus. Because of all the Peanuts gang members, Linus was the calm, thoughtful one. When the spotlight shined on him, his soliloquy moved a gang of kids everywhere.

And he did it without ever raising his voice.

But oh my gosh, it’s hard to be like Linus. It’s easier to be bossy, loud-mouth, know-it-all Lucy. No matter the topic, we have a festering need to convert people to our way of thinking. From guns to God to GMOs, we have an opinion and ours is the right one.

Everyone can’t always be right.

I know our country faces serious problems, and I’m not making light of the issues. Passions run hot and rightfully so. And while everyone deserves to be heard, I believe we can be kind and open-minded and recognize we all bring different experiences to the conversation.

Linus was different. Even when the Lucys of the world poked fun at him, Linus clutched onto his trusty blanket, the blanket that defined him. He stood strong as his own person. He acknowledged his insecurities and knew he’d pack away his blanket if and when the time was right.

Our own insecurities may be behind much of our own hateful rhetoric.

Linus was an optimist, and I love that about him. Each Halloween he waited and watched for the Great Pumpkin in the most sincere pumpkin patch he could find. He sacrificed for his beliefs—no trick or treating with friends, no candy, no costume.

Linus taught us to keep the faith and believe in the goodness of people and pumpkins. As we pay homage to another glorious fall and head into election season (finally), we should aim to be more like Linus, at least a little. Think before you speak (or post on social media). Try to be more compassionate. Really hear what others have to say. Consider the possibility that maybe the person across from you has a good point.

The person across from you might even be r-r-r-ight.

Now, anyone want to talk about the Great Pumpkin?

P.S. If you need a complete refresher on Lessons from Linus, It’s the Great Pumpkin Charlie Brown airs on October 19, 2016, on ABC.

[tweetthis]As we head into #Election2016, remember the lessons we learned from Linus @Snoopy #ThursdayThoughts #bekind [/tweetthis]