Confession: I’m no fashion plate. I normally wear Converse tennis shoes and logo t-shirts, and my favorite jeans have patches on the knees. BUT, Thursday night, I got dressed up (for me), added extra eye liner (which may have been a mistake), and even wore a bejeweled necklace on loan from Vintage Cargo. Stan and Jeff, owners of Vintage Cargo, evidently worried I wouldn’t clean up sufficiently for my Fayetteville book signing.

So they loaned me this gorgeous piece… 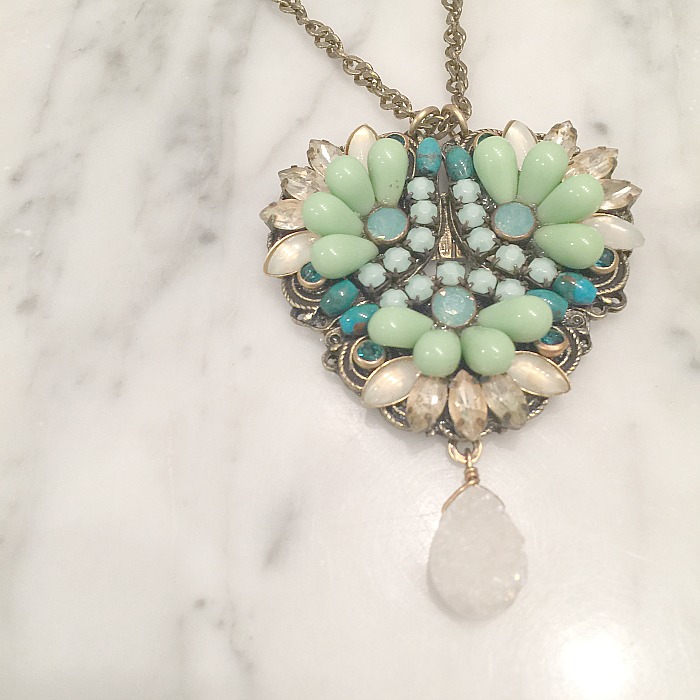 And it was a great night. Thank you to everyone involved in the event including French Metro owners Renee and Terry Hunt and Nightbird Books owner, Lisa Sharp, who handled books sales.

The crowd was diverse.

I did a reading. even though my book reading expressions were crazy. Goodness. Tip: When you have a book signing at a French antique store, no decorating is needed. In keeping with the book setting, I did provide delta cotton. with Jeff Chapman from Vintage Cargo (come to check his collateral?) The moral of the story: Today I’m returning the fancy necklace and yes, I’ll be wearing my Converse while doing so. And I’m no Cinderella. Life is real and crazy and far from perfect but it can be pretty great in between the ebbs and flows of regular.

Thank you to everyone who made my book signing at French Metro tres magnifique.

What I really wanted to do was learn to speak French. I wanted to be that girl who, when invited to the White House for an important state dinner, would be the only person in the room who could speak with the French prime minister in his native language. I would help solve international problems while sipping champagne and wearing a black ball gown like Audrey Hepburn. President Nixon would be impressed to learn I started out as a farm girl from Arkansas. Last fall, I bought an old French lesson book at the library’s used book sale. Momma thought it was a silly waste. Besides English, Momma said the only practical language to learn was Spanish, because of our Mexican cotton choppers. Since I used my own money, she really didn’t have a say. ~The Accidental Salvation of Gracie Lee, Talya Tate Boerner (me!)