Hey. I’ve been out of town. The girls (Lucy and Annabelle) and I took a little road trip to Texas.  I saw my niece perform in her high school musical—always a fun thing!—ate at some of my favorite restaurants, saw the Dallas Mavericks lose to the Memphis Grizzlies, and hung out with a few friends. Now we are back in Fayetteville, which by the way, is in full spring bloom. Gorgeous! Since I can’t think of anything clever to say, I’ll share a few pictures of the weekend.

I love seeing a random balloon floating on the water or sailing through the sky. And I saw one in Las Colinas. John and I took the dogs for a walk along Campion Trail smack dab in Las Colinas near a branch of the Trinity River. Nice! Annabelle promptly picked up THREE ticks. Not so nice! 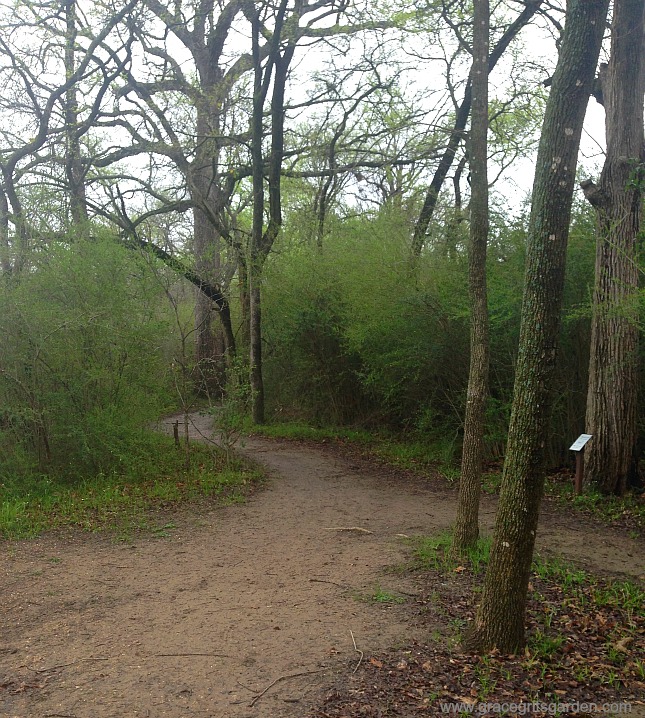 We had fantastic seats at the Dallas Mavericks game (my Mother’s Christmas gift to John). Even though the Mavs forgot to show (rude), we had a great time. Riding the Dart rail to ACC felt very urban and eliminated the whole parking thing. I had a huge, ice cold beer and a yummy hot dog, so all was not lost. Plus, the Grizzlies are my backup team anyway. We spent time with good friends in our old Munger Place neighborhood. Lucy and Annabelle enjoyed seeing their buddy, Chester, who kept a lookout for the Scalini’s pizza man. Yes, we drove by our house which I must say makes me cringe a little. The front room, which was painted a soothing (to us) paint color has been replaced with red raspberry that glows like a beacon down Worth Street. To each her own.

How was your weekend? The house where I grew up is lovingly named the Bat Cave because my mother’s initials are BAT (Barbara Ann Tate). Even more appropriately, the name fits as certain rooms are windowless are dark due to add-ons oddly placed here and there whenever Daddy had a good crop.

The Bat Cave is a place of great adventure. Never-a-dull-moment adventure. At the mere smell of a distant rain shower, the electricity flickers twice then goes out. And speaking of rain… Rain leads to standing water in the back yard. Standing water results in toilet flushing problems… That’s all I’m gonna say about that.

Momma, my sister and I recently loaded up and drove from Dallas to the Bat Cave to take care of farm business. We did this even though bad weather was forecasted. Even though we knew better.

We weren’t afraid of a little snow. Plus, caves are supposed to be cold, right? We didn’t factor in ice.

Before the most boring of all Super Bowl games ended, the Bat Cave was sealed inside an inch of glassy ice. Trees were quickly transformed into beautiful Chihuly-like artwork. Gale force winds snapped power lines. Telephone poles were sucked from the Mississippi County gumbo and lobbed into fields along the highway leading to the cave.

Fun! Just like old times, we had a bunkin’ party complete with friends from grade school. We slept piled together underneath hundred year old quilts. A night of giggling and reminiscing gave way to an arctic morning with no heat, no coffee, no showers…

Fortunately, folks take care of each other in the country, and our favorite farmer rigged up a duck pit heater in the kitchen and brought us strong black coffee. He’s a lifesaver that way. Excitement faded as temperatures plunged and reality settled in. Thirteen electric poles were down within the two mile Bat Cave-to-Cottonwood Corner stretch. Thirteen…

Over the next few days, we became gypsies. During daylight hours, we camped out in the duck pit kitchen wearing multiple layers of clothing. I hung quilts in doorways to trap heat. Before nightfall we escaped to Memphis to the warmth of a hotel room. We turned our debacle into a semi-vacation by visiting the Peabody ducks, dining on Beale Street, and touring the greatness of Sun Studio. We even cheered our beloved Dallas Mavericks to victory over the Grizzlies with last minute, excellent seats. (Since the Grizzlies are my backup team, it was a double treat.) After four days with no electricity, power has been restored to the cave, knock-on-wood. We are luxuriating in the warmth and enjoying all those things typically taken for granted like being able to wash dirty underwear and enjoy a cup of coffee…

But there is snow in the forecast tonight. The splendor could be short lived.

A huge thank you to all the folks who have worked around the clock in frigid weather to restore power to Mississippi County!