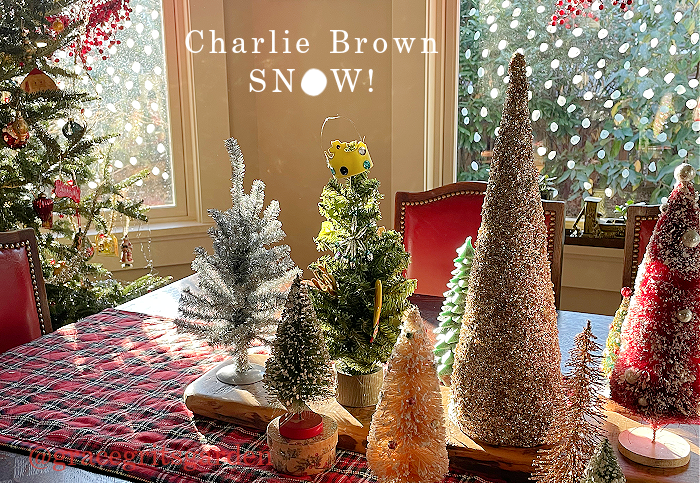 This post contains affiliate links. I may earn money from purchases.

Did you watch A Charlie Brown Christmas this year? PBS has been playing it for the past three Sunday nights. I doubt I’ve missed a year since it debuted on December 9, 1965.

This year when I watched it, I thought about all the fabulous snowfall in Charlie Brown’s neighborhood. And I wondered where Charlie Brown lived. John guessed somewhere in the Northeast since his grandmother lived in a condominium. According to Peanuts Fandom, there’s disagreement regarding the location of Charlie Brown’s home. Earliest comic strips eluded to California where Shultz’s office was located. Later, several references (and lots of snow) directed fans to a Charlie Brown neighborhood in Minnesota where Shultz grew up.

Regardless, we won’t be having snow in Fayetteville this Christmas. Our forecasted high for Christmas Day is 72.

I decided to create the illusion of Charlie Brown snow from our dining room windows. Sometimes a girl has to take things into her own hands.

Have You Ever Noticed?

Charlie Brown snow always falls in fat, fluffy flakes. Snow in the world of Peanuts is heavy and wet, the type of snow that sticks together to form perfect snowballs and snowmen capable of sporting top hats and woolen scarves.

I drew my Charlie Brown snowflakes on our windows using a chalk marker. Chalk marker paint comes off easily with water and a paper towel.

(Shoe polish would probably work too—the sort we used to polish our saddle oxfords back in the day. Do a test patch first.) Your circles of snow needn’t be perfectly round or uniform. After all, even in Charlie Brown’s world, no two snowflakes are alike.

We have three bay windows in our dining room. I painted Charlie Brown snow on the three bottom windowpanes. Now, when we gather around the table for Christmas lunch, it will be like we are sitting inside a snow globe. Wouldn’t this be a fun thing for kids and grandkids to do?

Designs certainly aren’t limited to Charlie Brown snow. Christmas trees or snowmen, candy canes or stars—the possibilities are endless! In fact, maybe I’ll add stars to the top windowpanes. What do you think?