Y’all, there’s just somethin’ ’bout War Eagle. It’s a state of mind. Almost a love story. Definitely a special sort of spot in the Ozarks. A couple of weeks ago, I visited for the first time. How crazy is that? I’ve known about it forever. Of course during most of forever, I lived in Dallas.  So while all my Arkansas friends were at War Eagle, I was at the State Fair of Texas. Almost like an alternate universe thing, but not.

Today I’m giving you a recap of my War Eagle experience—what I saw and did. What I bought and thought. If you’ve been, I’m curious to hear your take on it.

First off, the history…

Wow. I think we should call it the little mill that could. War Eagle Mill has been destroyed by flood (1848), war (Civil), and fire (1924) yet rebuilt each time, because evidently it needs to occupy that spot on the bank of the War Eagle Creek. Originally built in 1832 by Sylvanus and Catherine Blackburn, they were young newlyweds when they moved from Tennessee and settled at War Eagle Creek. The Blackburns farmed and built a house and mill from the local hardwood forest. They carved a life together and had lots of babies.

Five of their sons fought in the Civil War.

During the Civil War, the Union Army occupied the area and used the mill for grinding corn. When forces moved to nearby Pea Ridge, the Confederates burned the mill to the ground to keep the Union from using it again. In the 1870s, James Austin Cameron (J.A.C.) Blackburn (one of the Blackburn sons) rebuilt the mill and added a turbine engine instead of a water wheel. The mill became the largest in Arkansas.

War Eagle sawmill cut much of the lumber used during the construction of the University of Arkansas including Old Main. 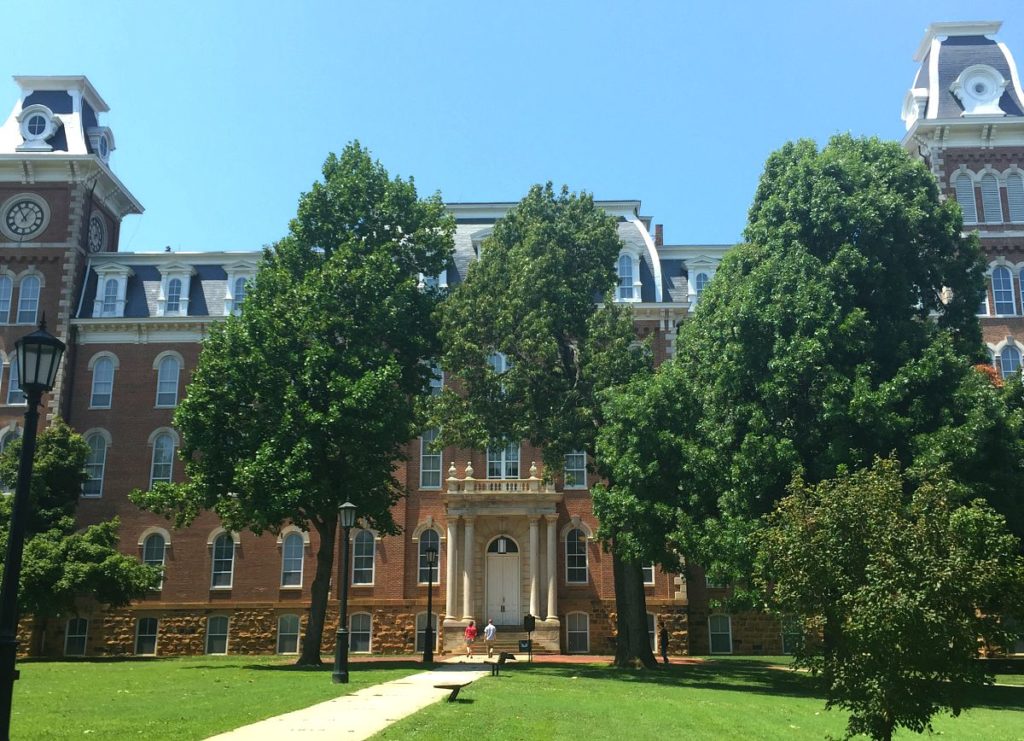 Old Main at University of Arkansas

In 1924, fire destroyed the mill. It wasn’t rebuilt until 1973 when new owner, Jewel Medlin, discovered the original blueprints and brought back the waterwheel.

Located deep in the woods, War Eagle feels like what a fall craft fair should feel like. Trees and turning leaves. The air saturated with all the sugary/fried food fair smells. Jaunty, toe-tapping music. Fall breeze. Sunny sky. Kids swimming near the bridge. Folks sitting and sunning and skimming rocks. Couples holding hands. What a great people watching place. How fun to be part of it. 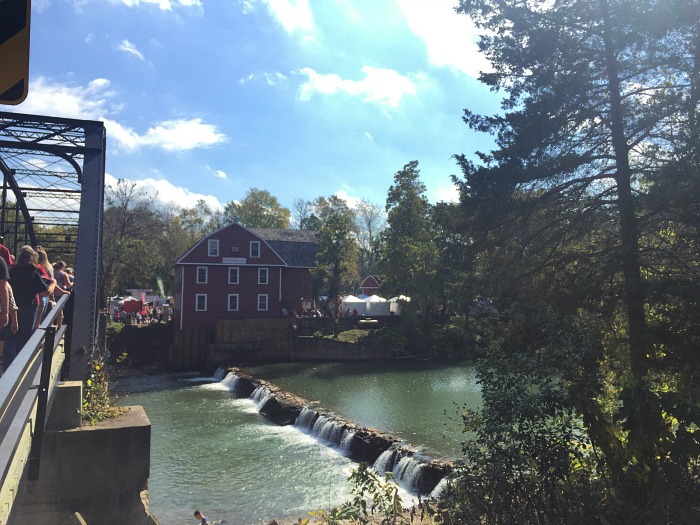 War Eagle includes three separate craft fairs—War Eagle Mill Craft Fair, War Eagle Fair, and the Sharp Show—but everything is easily accessible on either side of the historic wooden bridge. The only difference among the three fairs (as far as I could determine) is a portion is juried, meaning there’s an application and approval process for being accepted. And those items must be 100% hand-crafted (as opposed to antiques, etc.).

I have a touch of craft fair fatigue. I didn’t go to buy anything because I don’t need anything. Other than food. There’s somethin’ ’bout fair food. Right? So I made a beeline for the corn dog booth and oh, yes, it was delicious.

And then a flash of red caught my eye. This vintage red truck called out to me, lured me over. Play Boy Trucking…with the perfect amount of wear and age and grit, I didn’t dare touch but admired from two feet back. I wondered if the doors would swing open if I tried them. I resisted.

And I walked away.

But there was somethin’ ’bout that place and that creek and that food and that truck that made for an excellent day.