Really, I’m more impressed by not a lot.

Elvis’s birthplace in Tupelo, Mississippi is intriguing because I prefer beginnings. Johnny Cash’s homeplace. The barn where Hemingway wrote parts of A Farewell to Arms. “George Washington slept here” sort of spots on the map. 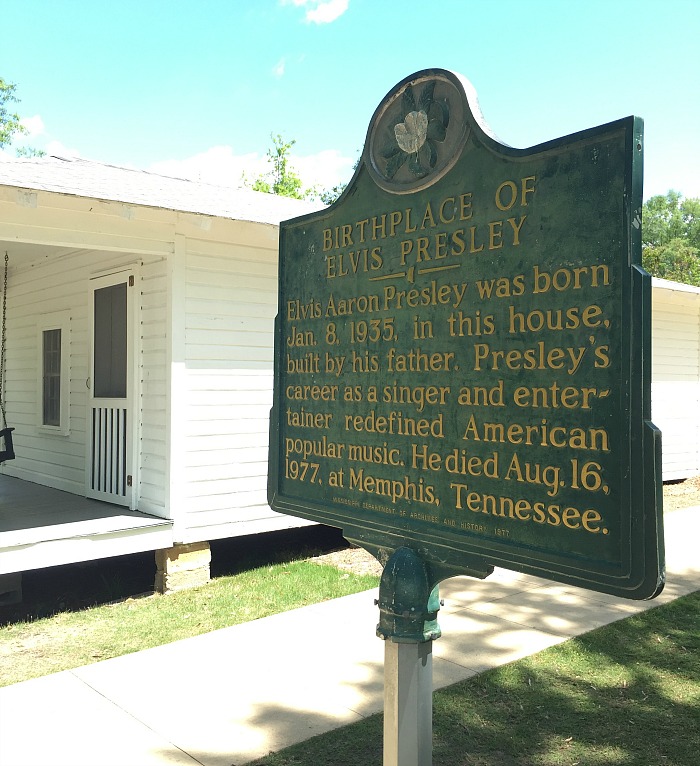 These places are significant. Home base. The starting line before we knew where we wanted to go.

The birthplace museum focuses on Elvis’s early music and childhood, photos of his elementary school class, toys he played with, a replica of his first guitar, those sorts of interesting things.

Elvis’s beginning was humble yet so rich in family and church and music. The church where Elvis spent every Sunday and Wednesday night is located on the birthplace property a few yards away from the home where he was born. It has been completely restored. The pulpit is original.

Be sure to time your chapel visit with the regularly scheduled multimedia presentation. It was my favorite part of the trip. I was immediately taken back to my childhood church with the hymns, the preaching, the hard pews, all of it. And I realized I miss attending a small country church. I saved the house tour for last.

It’s hard to call it a tour because the house is only a two-room shotgun with a bedroom and kitchen. Elvis was born in the bedroom. His twin brother was stillborn. (I’d forgotten Elvis was a twin). Although the furniture is not original, Vernon Presley helped choose similar furnishings and placed them in the exact positions. There are people who aren’t Elvis fans. Folks who never got into his music or his movies or his story. I get it (sorta). It was before their time or after their time or whatever. But standing in the actual room where Elvis was born made the hair on my arms tingle. I felt awe-inspired, not only because ItWasElvis, but because his influence on our culture is extensive, especially considering his humble beginning.

I chatted with my tour guide for quite a while because I had lots of questions (and I’ve turned into my mother). Before I left, she bought a copy of The Accidental Salvation of Gracie Lee. (Writers take note: always have a copy of your book with you…) I gotta tell you, when I found myself signing the book I wrote while standing in the very room where Elvis was born…well, that felt giant for me.