I’m practically related to Johnny Cash. Not really, but sometimes it feels that way. In the 1970s when Daddy bought the farmland next to the Cash home place in Dyess, Arkansas, we became connected. Instantly. It doesn’t matter that we were never properly introduced or that the Cash family had already sold their land. The soil has a way of connecting people. Like blood.

I think Johnny Cash would agree.

When Dr. Ruth Hawkins and Arkansas State approached Momma about donating or selling a portion of our land to the Johnny Cash restoration project for parking and whatnot, we hem and hawed around wondering, what would Daddy do? Then we decided to donate it anyway. It just felt right. That donation scored us an invite to the VIP Inspection Tour last Friday, a sort of preview before the August grand opening. (Really Momma was invited, and the rest of us tagged along as her entourage per usual.) The Dyess Administration Building, which by the way strikes an uncanny resemblance to Elvis’ Graceland, has been beautifully transformed into a first-class museum detailing the settling of Dyess Colony under the Works Progress Administration. Oral histories, photo displays and original artifacts profile the acute struggles borne by families who paved the way for us. 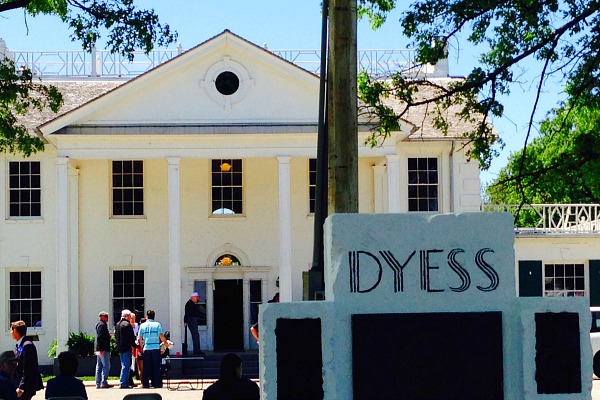 A whole slew of Cash family members attended this shindig, traveling from Tennessee and beyond, including  Cash’s youngest daughter, Tara, and siblings Tommy and Joanne who were born in Dyess and lived in the house. Addressing the crowd, they cracked jokes and shared memories. In short, they were down to earth and grateful for the transformation and preservation of their home place.

Really, they seemed like regular Mississippi County folks. And they traveled in grand style too. But now for the highlight of the day…Johnny Cash’s boyhood home has been restored and furnished with period pieces, some donated by the Cash family, others donated by area friends. Although I’ve been down the gravel road and seen the house too many times to count, I sensed a difference on this special day of commemoration. The very land felt hallowed—not only because Johnny Cash came from such a simple place, but because anyone survived such hardship wrought by the Great Depression and flood of 1937.

Walking through the cramped hallway, I sensed the loss of a time when modest spaces were filled with large, close-knit families who struggled and celebrated together. Working. Sleeping. Eating. Praying. And in the case of the Cash family, making music. Gazing out the window across delta gumbo, the same delta gumbo Johnny Cash longed to escape, I understood the source of his music. The brutal, raw honesty of the land is what inspires me to write. At a very early age…I was very aware I was part of nature—that I sprang from the soil.  – Johnny Cash

How High is the Water Mama – Johnny Cash

Grand Opening for this Arkansas State University Heritage Site is scheduled for August 16, 2014. The site will be open on a limited basis and by appointment for group tours beginning in late April 2014. Click HERE for additional information or phone 870-972-2803.