Last Saturday, Lucy and Annabelle went to Zuppa Zuppa Soup Kitchen. The spring-like weather had all of us headed outside, and besides, Ann Harris, owner of Zuppa Zuppa, was introducing a soup in honor of Gracie Lee—Amazing Gracie Chicken and Dumplings!

A Gracie Lee favorite, for sure.

Since Zuppa Zuppa Soup Kitchen is one of the food trucks at the Yacht Club on College, I thought it would be perfect for Lucy and Annabelle. Casual. Outside. Pet friendly. Sounds good on paper, right?

I declared it to be a great time for a Pop-Up Book Signing too, and it started out well enough. Even though the wind whipped like West Texas, a nice crowd came for lunch and several people ordered Amazing Gracie.

The chicken and dumplings were slap ‘yo momma rich and delicious, but I only enjoyed one bite when Annabelle caused a little trouble. 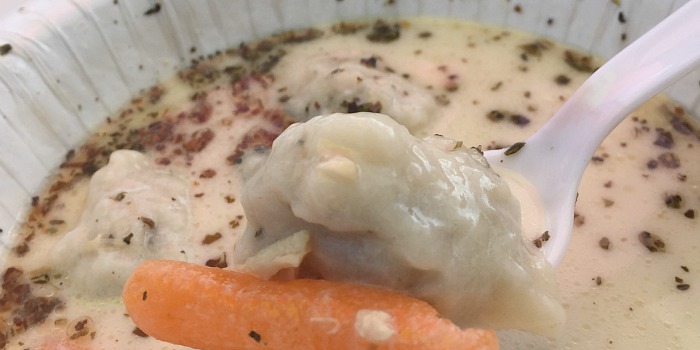 In less than a split second, Amazing Annabelle pulled an entire bowl of Amazing Gracie from the edge of the table before John or I could react. The soup dumped straight into my lap and all over Annabelle’s legs. I shot from my chair. She ran under the chair and licked her legs. Lucy lapped up chunks of chicken from the gravel. Eventually Annabelle helped her, and the two of them consumed the best meal they’d had in a long while.

A book signing with a comedy show.

De Ann, a high school friend who happened to be in Fayetteville (she lives in Texas), came out to buy books. She missed Annabelle’s trick which was probably a good thing. It was nice to see her after over 35 years. I hope Amazing Gracie remains on the menu because it truly was amazing. Annabelle and Lucy agree.

To read about other adventures of Lucy and Annabelle, click HERE.