After years of sitting empty, Superior Bathhouse in Hot Springs, Arkansas, has been transformed into a restaurant, brewery and distillery. Superior Bathhouse, built in 1916, is rumored to have been the first integrated bath house in Hot Springs. That in itself is cool. So is the creative menu from chef Angela Nardi (trained in Dallas) which includes black-eyed pea hummus, crab risotto, Petit Jean seasonal meats, etc.

We went twice in three days. That’s how much my husband and I enjoyed it. I ordered the citrus quinoa salad with apple basil vinaigrette (both times). It was as tasty as any I’ve had and honestly, up until the Superior Bath House Brewery opened, I doubt the words quinoa and Hot Springs have been used together. Just a suspicion I have based on past experience… Not only was the food and drink superior; the renovation is pretty darn superior too. The main floor has been transformed into a craft beer tasting room and the original front sun porch features almost 75 feet of windows overlooking busy Central Avenue. White octagonal tile speaks to another time as do the original bath house lockers behind the bar. 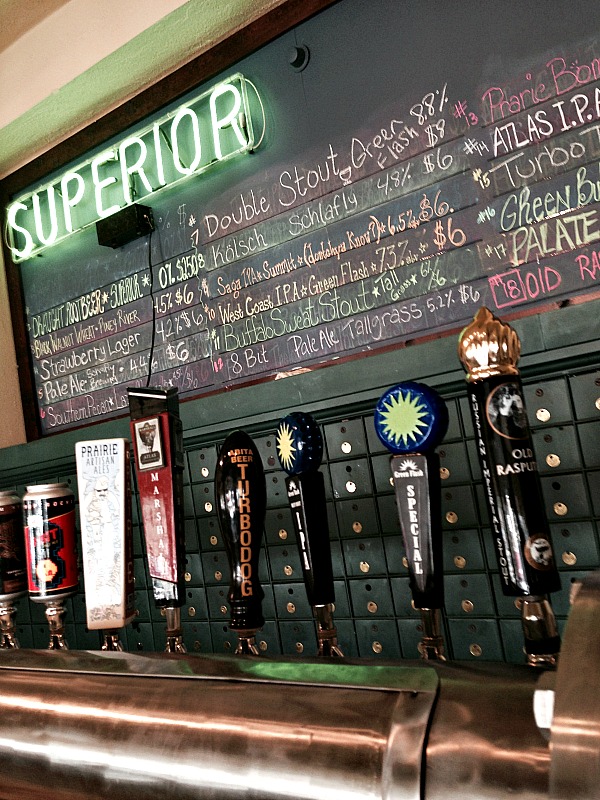 I received a private back house tour. (Blogging has its perks.) Impressive brewery equipment was being installed where old bathtubs once cured what ailed. Within mere weeks, Superior Bath House Brewery will be brewing its own beer and will be the only brewery in the nation using natural hot springs mineral water. Until then, enjoy the impressive slate of local craft beers, cider and homemade root beer.  And p.s., the assortment of rich gelato will put a smile on your face after a “difficult” day at the horse track.

Although magical baths are no longer available at this particular bathhouse, Superior Bathhouse Brewery still has the ability to sooth what ails. Just in a different way. “Beer is proof that God loves us and wants us to be happy.”
― Benjamin Franklin