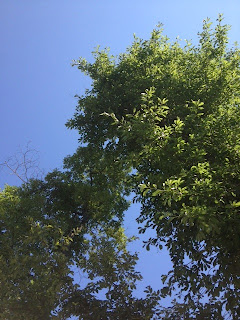 My brain hurts. Writing and thinking and revising and listening is exhilarating to the point of exhausting. Especially listening. Listening is the tricky part, listening to my own thoughts and hearing what I have to say. What if there is nothing to hear? A dull ache had been building all morning behind my left eyebrow. I found myself rubbing this spot, trying to get the ideas to flow from behind the throb. After lunch I took a break, disappearing beyond the barn, beyond the trees to a grassy patch, underneath an old tree that has likely kept watch over this property for years. Flat on my back with shut eyes, I felt the warm sun on my arms and face. The birds chattered. A distant train. There was a nice breeze that moved the trees to stir, to sing.

My canvas book bag became my pillow. Inside, a short story I had written. Dr. Lott had edited it this morning, returning the pages to me over lunchtime lasagna. My first feedback at this retreat. I was excited to read his comments, but anxious, like waiting on a big test grade in school. Right off I saw the pages were filled with comments, blue ink scribbled in the margins, his thoughts, his professional opinion. I stuffed it in my book bag, like a note passed in school tucked away to savor later when all was quiet and my head was clear. Afraid to read the suggestions but longing for reaction, I would digest it after the aspirin had a chance to work its magic. These pages, my words, now made the stuffing of my makeshift pillow. I was careful not to crumple them.

Opening my eyes, I studied the leaves, imagining the view to be that of Donald Harrington’s as depicted in his Ozark tales of fictitious Stay More, Arkansas. His tree colors included every shade of green from spring pea to black forest, like crayons in the jumbo box, the box with the sharpener in the back. But more than the shades of green, he described the lilting sound of the trees, the choiring of the trees. I heard the choiring of the trees this afternoon.

Studying for final exams in college we often joked about sleeping with a book, with our head resting against a bulky economics textbook. As if the sheer nearness of the written theories and definitions and charts inside would seep into our brains allowing us to awake with amazing clarity, with the ability to discuss the Keynesian spending multiplier with the same ease of counting to 100 or making skillet cornbread. Maybe as the trees sang, Dr. Lott’s wisdom would percolate on the pages of my short story, filtering into my head.
This peaceful moment was interrupted with a bee sting on my arm. It was a sweat bee, more of a nuisance than a sting. I hadn’t thought of a sweat bee in years. Do they only exist in Northeast Arkansas? I gathered my book bag pillow and returned to my writing spot inside the barn. Pulling out the marked up short story, I was thankful Dr. Lott doesn’t use a red pen. 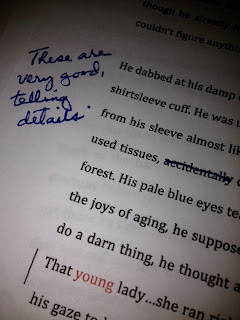 Immediately I noticed, “Perhaps a bit of description here?” My husband begins sentences with ‘perhaps’ when he is attempting to be diplomatic. But I understood this suggestion, and it was easy to add. We had spent time this morning discussing story endings. What makes a good ending or a confusing ending, a strange ending, an ending that makes you wish you had not wasted your time, or an ending that leaves you wanting more? Quickly jumping to the last page of my story he had written, “Good ending… the characterization is very good.”

Nowhere on the paper did he offer, “Perhaps you should return to banking…”

talya
“February came. He imagined the buds were a-swelling. The trees were not going to sing for another month or more, but the buds swole up as if the trees were humming in practice and tune-up.” Donald Harrington, The Choiring of the Trees