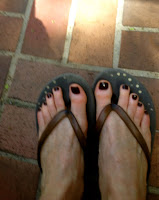 80 degrees calls for a pedicure. Pulling into the parking lot early, I was happy to see no customers there yet. The five employees were practically in a receiving line, so thrilled to see my neglected toes stroll in. Was I the 5,000th customer on this Leap Day? Would there be balloons? Guess not. After carefully selecting my polish – I debated between “Suzi Loves Cowboys” and “I Don’t Give a Rotterdam!” – I settled into the massage chair with a copy of Bon Appetit, which of course made me hungry. About halfway through the routine, it was still quiet and peaceful, and I began to think this might just be my most uneventful experience at this place. Ever. Knock-on-wood.

A girl walked in to get her legs waxed. Wow. Her whole legs? That must be painful and expensive. The ladies became a bit animated over this. There was chattering and pointing about who would take on this assignment. After a Vietnamese rock-paper-scissors game, the lady already doing my feet, disappeared into the back room with the leg wax girl, and my toes were shuffled off to a lesser technician.

A few minutes later, an older lady came in for a nail fill. She sat near me and was attended to quickly. Still later, a well dressed businessman entered, with a rolled poster tucked underneath his arm. He spoke to the salon owner, explaining that he was selling ads for the Woodrow Wilson High School football calendar to be published next fall. Would the salon purchase a small ad for $100? The owner was suddenly struck mute. No one spoke. Everyone looked around in complete silence. The only sound was a Vietnamese instrumental rendition of Bridge Over Troubled Waters playing in the background. It was awkward.
Suddenly, the nail fill lady jumped in wholeheartedly with both feet and hands speaking to the businessman, as if the salon workers couldn’t hear her – “Yes, that is a good thing to do! A local business should support the local schools. Businesses only want us to support them. They should give back too!” She asked to see the calendar. “Oh that’s a very, very nice calendar. (Two verys with a s-l-o-w emphasis on the last very.) They should definitely buy an ad.” And on and on she went. I became suspicious. They had to be in cahoots! It really was a brilliant routine. The owner never spoke but looked a bit faint, as he wrote out the check. Woodrow Wilson High School can thank the well oiled tag team for that $100. 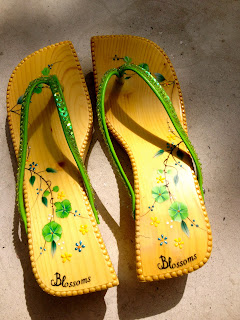 After the excitement died down, it became quiet again. As my toes dried, I relaxed and listened to my Ipod. I could almost nap. As the technician finished and began putting my flip flops back on, I opened my eyes to see my perfectly polished “Suzi Loves Cowboys” toes perched in bizarro, hand-painted, flowered shoes! “No, those aren’t mine – my flip flops are right there”, I pointed. “No, for you. Gift for you.”

“Yes, gift.” I sat there stunned with those odd wooden oriental shoes on my feet which so did not go with my blue Dallas Mavericks Western Conference Finals t-shirt and khaki cargo capris. I looked around for John Quinones and the hidden camera.

Was I the 5,000th customer? This was the most peculiar thing. I tried to stand, but it was difficult on hard, 2-inch high, wooden flip flops – similar to those 1970s Dr. Scholls sandals I could never quite maneuver. Not only were they uncomfortable and NOT my style, they were huge on my feet. I clopped to the door like a freakin’ Clydesdale horse – CLOP CLOP CLOP. They watched me wobble to my car in those things – they stood at the window and smiled like they were so proud. Will they expect me to wear these next time? I really must find another salon or move back to Arkansas asap! I wonder if Woodrow Wilson needs a donation for the silent auction?
talya