Yesterday I spent the afternoon at The Junk Ranch in Prairie Grove. If you live in Northwest Arkansas and are looking for something to do today, GO. Admission Saturday (today) is $5. You will find plenty of antiques, vintage, repurposed, primitive and homemade items plus live music and good food spread over 35 acres of pastureland. You couldn’t ask for better weather. If you aren’t feeling the spirit of fall, The Junk Ranch will take you there. And p.s., since today is the last day, vendors will be ready to deal!

A few pics from yesterday… For a great tour of The Junk Ranch check out Junque Rethunque’s periscope broadcast HERE.

Musical Pairing: (this band is part of The Junk Ranch lineup)

The Squarshers, Never Will I Forget Oh Snap! is a vintage camper photo booth John and I wandered into Sunday at the Clothesline Fair in Prairie Grove. Besides our schnauzers, this is the cutest thing I’ve seen in a long time. According to the owner (website under construction), her new photo booth concept is available for parties, school and church events, corporate parties, anytime. This is so seriously creative and another one of those things I wish I’d thought of. (By the way, Oh snap! is playful slang for Oh no! or Oh shoot! or as my Momma says, Oh foot!) END_OF_DOCUMENT_TOKEN_TO_BE_REPLACED 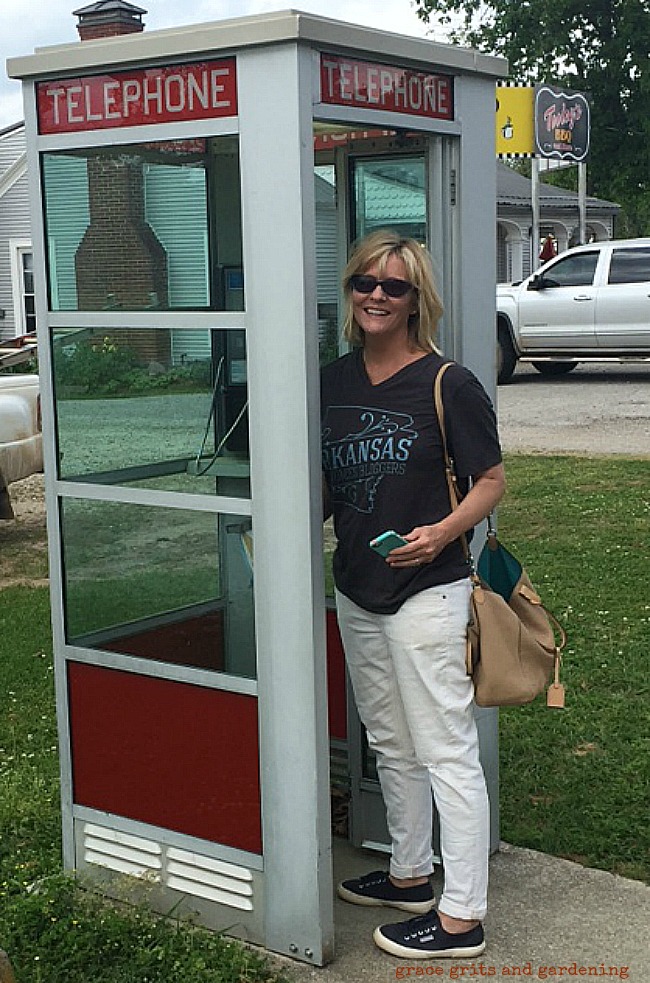 The phone booth in Prairie Grove recently received lots of attention when a lady fell asleep at the wheel and plowed into it. Since it only generated about four bucks in annual revenue, the Prairie Grove Telephone Company (serving the western portion of Washington County), debated about “retiring” it. Forced retirement is rarely a good thing. People took to social media and raised a hullabaloo about their beloved phone booth. It had become a photo op destination and part of what made Prairie Grove special. The phone booth was not only repaired, it’s been nominated to the National Register of Historic Places.

Can you imagine all the phone calls placed in this small space since 1959? Words spoken. Promises made. Pleas pled by curfew-breaking teenagers. But mom… There’s a phone book inside, too. According to Smithsonian, the world’s first pay phone was installed at the corner of Main Street and Central Row in downtown Hartford, Connecticut. There’s a plaque to mark the spot. As phone booths become extinct, maybe Prairie Grove’s phone booth will someday be the last working pay phone booth.