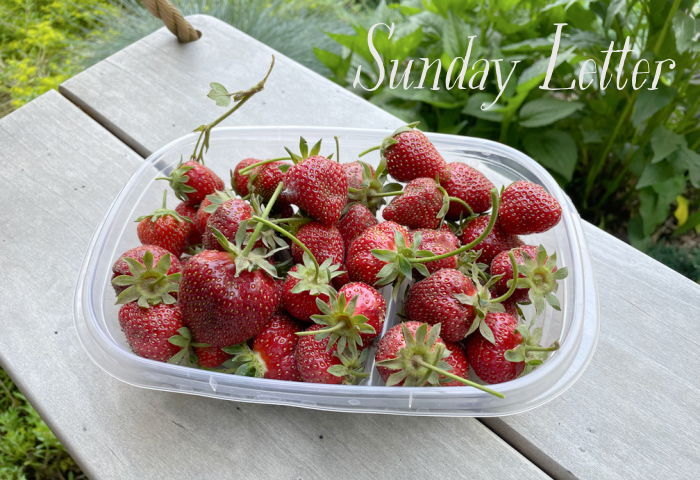 Hello and good morning! I hope all is well in your corner of the world. After all the anticipation and preparation, the Arkansas Master Gardener garden tour is over. We had a fabulous time meeting all the gardeners from across the state who came to tour our little space. I promise to do a recap post soon. I have LOTS of blogging to catch up on in the coming weeks. Lots of catching up in general…

Don’t you hate it when people go on and on about how busy they are? Like no one else is busy!? Well, forgive me for a moment while I do just that.

Seriously though, I really have been busy. In the past five weeks, I have judged a pie contest, attended five book / writing events in three states, driven to and from the farm twice, took a side trip to St. Louis, hosted a graduation party, and participated in the state garden tour. What wonderful things to occupy my time! Lest you think I’m complaining—oh no—every teeny bit of it was fun. I’m glad I said YES to each invitation and opportunity.

My car is tired though. Betty White suffered hail damage in Cherokee Village, a cracked windshield somewhere [likely while driving on I-55 between West Memphis and Osceola], and she now has another 2,000 miles to her credit. We both need a spa day:)

Gracie is a big helper in the garden. After a long hot day of weeding, she’s learned to help herself to a tall sip of water. Repurposed in the Garden

When we bought our house in 2014, there was a water feature in the backyard made with a large galvanized trough.

See? This is how it looked. The sound of water was quite lovely. Last year, the water pipe broke, and only the mosquitoes used it. Of course, we knew we had to fix it or replace it or do something before the garden tour. Since the broken pipe was inside the stone wall, repairing it turned out to be quite the ordeal. Chiseling through stone was not something we wanted to tackle.

After exploring several options, we removed the trough. And when I say we removed it, John removed it. I stood nearby and cheered him on as he dug and dug all around it. It’s a deep trough, and it was three-quarters buried.

Once removed, we not only had a whole new bed for planting, but we also had a bonus raised planter trough. Yay! Right off, we planted a serviceberry tree in the vacant fountain bed and relocated the trough to an empty spot in our back side garden.

Q: Do you know how many bags of potting soil or buckets of compost it would take to fill such a large trough?
A: It doesn’t matter! Rather than buying potting soil or using all your precious compost, there’s an economical and natural way to fill your planters.

Step 1: Add broken limbs and twigs to the bottom. Step 2: Next, add a layer of shredded paper (newspaper or brown paper w/out colored ink).

Step 4: Finally, add several inches of compost. Can you believe we made this black gold ourselves?? Step 5: Several weeks later (once our last frost date passed), we planted a few shade-loving coleus, an asparagus fern, and a lily. The plants are already filling in quite nicely. 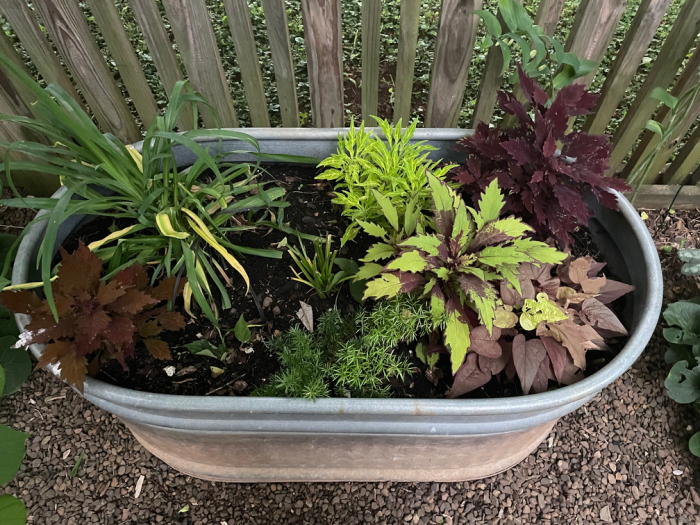 Here’s a shot of the side area. The left side is planted with spicebush shrubs and creeping jenny, and the right is planted with redbud trees, wild ginger, and goatsbeard. Our new planter adds interest to this otherwise green area. (You can see on the side of the planter, how deeply it was buried.) Also, when the trough served as a water feature, the bottom was filled with lots and lots of river rock. We repurposed the river rock as a border for a new shade bed. I love how it turned out! Last summer, a neighbor gave me four or five strawberry plants from his garden. “It may take a while for them to produce,” he said.

Nay, nay! Look at these beauties. I’ve already had two strawberry harvests in the past two weeks. A few weeks ago, another neighbor gave me a thornless raspberry vine. I’m crossing my fingers it does as well as my berry plants. Driscoll’s won’t have anything on me!

I’m not a very good farmer to tell you the truth.

Thanks for reading today’s Sunday Letter. Have a peaceful, beautiful day, friends.