This post contains affiliate links; I may earn commissions on purchases.
Not enough to say grace over, but still I’m required to tell you.

February is a short month, and that’s my excuse for only having five book reviews to share—one written by a local Arkansas author, a bestseller, a classic (extra points because it has been included on banned book lists here and there throughout the years), a recent release, and a coming soon novel.

Coming soon? Yes! I am excited to be an official book reviewer for NetGalley. From time to time I may be able to introduce you to a book not yet published. If it’s interesting to you, you can add it to your Goodreads Want To Read list, get your name on the top of your library reserve list, or purchase it as soon as it hits the shelves.

All the Young Men: A Memoir of Love,
AIDS, and Chosen Family in the American South
by: Ruth Coker Burks
(Memoir)
Publication Date: 2020 In 1986 while visiting a friend in the hospital, Ruth heard a man in a nearby room moaning for help. Investigating, she discovered he was in quarantine, his door marked red, and the nurses were drawing straws to determine who must help him. Ruth ignored the quarantine, went into his room, talked with him. Near the last stage of the disease, the young man was crying for his momma. Thank goodness Ruth was in the right place at the right time.

As word of Ruth’s compassion spread among the AIDS community, she became a friend and advocate to the growing population of AIDS-infected young men suffering in Hot Springs, Arkansas. She worked tirelessly to educate city teachers, her church congregants, the young men themselves. Many shunned her, including friends and church family.

Ruth’s impact on the lives of hundreds of men and women cannot be understated. It is astounding that she achieved so much as a young woman with little financial resources, a single parent to a young daughter with no family support.

What a powerful read about AIDS victims in Hot Springs, Arkansas, and the lady who single-handedly fought to help when misinformation and fear ran rampant about the disease. All The Young Men is proof that we sometimes make our own families. And, that one person truly can make a difference.

Favorite Quote: Men can sometimes do the deciding about who is exiled, but it’s women who do the day-to-day work of shunning. They knew they’d lose everything if they’d showed mercy to their sons. This quirky mystery is set in a luxury hotel where Molly the maid cleans each room with delightful precision. Molly isn’t like other people; I suspect she’s on the spectrum (although her issue is never named). She is extremely naive (except when she isn’t), has trouble picking up on social cues (except when she doesn’t), and makes decisions based on the imagined advice of her recently deceased Gran. When Molly discovers Mr. Black—a hotel regular and very wealthy guest—dead in his bed, she becomes entangled in a Clue-like whodunit.

I enjoyed this fun mystery very much, yet disliked the ending to my very core. (For heaven’s sakes, who writes a story twist into a book’s epilogue??? Nita Prose, I suppose.)

If you can suspend disbelief and ignore stereotypes, you’ll find this caper refreshing (the ending notwithstanding). Molly does her job with the focus of Keiko, the protagonist in Convenience Store Women (by Sayaka Murata). She reminded me a bit of Eleanor Oliphant (except when she didn’t). I truly appreciate a character devoted to cleanliness.

Favorite Quote: Everything will be okay in the end. If it’s not okay, it’s not the end. I first read The Martian Chronicles in 7th grade English class. Mrs. Ashley brought literature alive, introducing me to many classics that became favorites. As a child who never missed the Jetsons during Saturday morning cartoons, a girl enamored with the space race, the idea of living on another planet rather than rural Arkansas seemed plausible. It was simply a matter of time.

Now, re-reading this Bradbury masterpiece decades later, I can practically see the year 2033 out my kitchen window. And, all these years later, I still found The Martian Chronicles to be an incredible, mesmerizing read. Is this because my 13-year-old self traveled back to Keiser Junior High when I was hopeful and wide-eyed? Or, does my almost-60-year-old-self relate to humanity’s weakness as reflected in Bradbury’s writing?

Bradbury’s collection of linked micro-stories highlights social issues that are perhaps more timely today than when he wrote it. Simply brilliant, in my opinion. Both then and now.

Favorite Quote: We earth men have a talent for ruining big, beautiful things.

The Girls in the Stilt House
by: Kelly Mustian
(Southern Fiction)
Publication Date: 2021 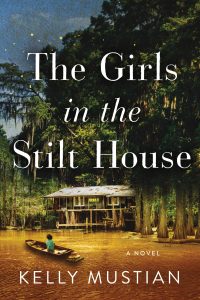 Whoa. If you want to sink your eyeteeth into a gritty southern tale, consider Kelly Mustian’s debut novel, The Girls in the Stilt House. Remember how the setting played such a role in Where the Crawdads Sing? In Stilt House, the swamp (located in Mississippi on the Natchez Trace) is one moody, broody character. The two human characters—Ada and Mathilda—are mighty memorable too.

Ada (white) is sweet and clueless, and Mathilda (black) is the hardscrabble daughter of a sharecropper. The two young women connect over a gruesome murder. The story is told in three parts—first Ada, then Mathilda, and finally the two girls together as they warily move forward as unlikely friends.

Theirs is the story of fighting for survival against extreme poverty and unimaginable circumstance. Mustian did a phenomenal job of reflecting both the beauty and the brutality of the deep south during the 1920s. This is not a light, feel-good story, yet it is beautifully written and not without hope. I listened to the Audible version BUT recommend reading the book instead because of the narrator’s sing-songy voice.

Favorite Quote: But it always happens you get what you need, a little at a time. In 1961, when Yuri Gagarin becomes the first human to journey to outer space, Edith Devine moves into her newly built home in the suburbs. Edith, the consummate housewife, is happily married to Charlie, and they have two teenage daughters. Yes, theirs is the American Dream come to life. When Frankie and Ralph (and their two sons) move into the yellow house next door, Edith and Frankie become best friends.

Frankie is oh so glamorous. She wants more than a future of homemaking, but her domineering husband (what an oaf!) would never allow such a thing. Edith and Frankie hatch a plan—Frankie gets a part-time modeling job, and Edith secretively takes care of the household chores and cooking for both families.

Everything works according to plan for a while.

Edith closely follows world news (especially the space race). She considers a momentous world event a sign of something major to come within her own life. I love this about her! Frankie has a mind for business and thrives in her secret career. (What a time when women had to hide their God-given talents.)

The author did a fantastic job of describing the culture and society of the 1960s and early 1970s. I grew up during those years and remembered many of my mother’s daily routines as depicted in the story (i.e., mounds of laundry to iron, soap operas in the afternoon, supper on the table by 6 p.m., etc.)

The Secret Wife is a story about the friendship between two women longing to be liberated. I was reminded of Revolutionary Road by Richard Yates (although The Secret Wife is much more light-hearted). The story’s ending shocked me and was not altogether satisfying, but overall I found this quick read engaging with a charming dose of nostalgia.

Thank you NetGalley for allowing me to read this book prior to publication. Opinions are my own. That’s it for my February book reviews. As I look back over the books I read in February, it’s interesting to me how many books included secrets and/or crimes. And two included space.🌘

If you enjoyed this post, I’d love for you to share it on your favorite social media site. The more exposure we give to BOOKS, the less space given to ridiculous noise. And we all know books are not ridiculous noise.

What are you reading? What is the last book to recommended to a reader friend?