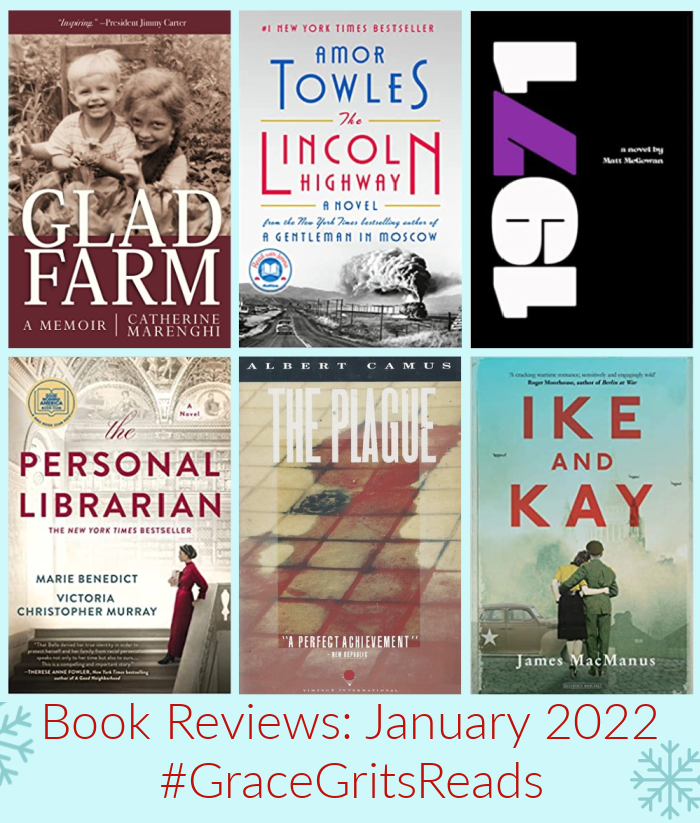 This post contains affiliate links. I may earn commissions based on purchases.

Hello readers! Today I bring you my reviews of the books I read in January, 2022. Before we get into the book reviews, I have a couple of small bookish announcements.

In 2022, my monthly reading goal is to include a book published independently or via small press, as well as a classic novel. With respect to indie books, there are many well-written and engaging books that deserve an audience (and the resulting reviews). And with respect to classics, many, many wait for me. Even though a book was penned in the prior century (or earlier), doesn’t mean it isn’t educational, entertaining, and captivating today.

Also, beginning with this post, I am including the publication date for each book I read simply to provide a bit more information.

As I did last year, each title is linked to my Amazon affiliate link. If you prefer to check books out at the library, buy from a local bookstore, or directly from the author—I say AMEN to that. Those are my preferred methods of book buying/reading too. But my link is included in case you want the convenience. Glad Farm is the enlightening true story of a young woman who grew up impoverished in the 60s/70s to disturbed but loving parents. I grew up during the same time, and while it’s hard to imagine not having running water or electricity, it wasn’t all that uncommon in rural areas.

The author’s gumption is admirable. Determined to break the cycle of poverty, Catherine creates a better life for herself against the odds. She worked to help her siblings and mother too, eventually buying a house for her mom. The author tells her truth in a straightforward manner which at times was mesmerizing; at times she only skimmed the surface of what I imagined lay beneath.

I listened to the Audible version read by the author. Hearing her voice made the story more intimate. The title of the memoir left me scratching my head. Glad Farm—the name or place or title—is not mentioned until the very end of the book. I’m not sure a mention in passing warrants a book title for one’s life story?

For readers of memoir, give this one a try. It will remind you of Glass Castle or Educated but with a bit less impact or polish.

Favorite Quote: A million little intersections, a million little chances to change the future, to go left or go right, faster or slower, and no way of knowing which of those choices will matter. “Well that’s life in a nutshell, ain’t it. Lovin’ to go to one place and havin’ to go to another.” This quote from The Lincoln Highway pretty much sums up the story.

When 18-year-old Emmett Watson is released from a work facility where he served a sentence for involuntary manslaughter, he goes home to the farm to fetch his young brother, Billy. They have plans to start over somewhere else. Problem is, two inmates have stowed away in the trunk of the car. Thus begins a series of almost slapstick misadventures as Emmett and Billy attempt to take the inmates to upstate New York before beginning their journey to California along The Lincoln Highway.

Until I read this book, I had never heard of the Lincoln Highway. But it’s real. The Lincoln Highway, dedicated in 1913, was America’s first transcontinental highway for automobiles stretching from Time’s Square in New York City to Lincoln Park in San Francisco.

This rich and entertaining read is full of humor, interesting vocabulary, and bits of wisdom. The ending leaves the reader primed for a sequel, but according to a recent interview, Towles said he never plans to write sequels. With each story, he gives the reader exactly the amount of information needed, and that’s all there will be. (As an author myself, I appreciate Towles’ objective.)

Amor Towles is the quintessential storyteller of our time. And The Lincoln Highway is chock-full of stories enough to fill several volumes. I thoroughly enjoyed the ride.

Favorite Quote: A farmer with a mortgage was like a man walking on the railing of a bridge with his arms outstretched and his eyes closed. It was a way of life in which the difference between abundance and ruin could be measured by a few inches of rain or a few nights of frost. When Fanny has car trouble on a rural road in the Missouri Ozarks, she sends her 13-year-old stepson, Bud, to a distant farmhouse for help. Once Bud disappears from view, Fanny leaves the keys in her 1968 Pontiac Le Mans and hitches a ride with a trucker to Fort Smith, Arkansas.

How could any mother do this? (That’s what I was thinking.)

Well, you see, Fanny is grief-stricken, and she isn’t thinking straight. She needs to see the place where her husband recently died in a military flight-training exercise. And Bud? Well, Fanny didn’t even know Bud existed until after she married his dad.

In 1971, McGowan skillfully draws the reader into the wounded lives of Bud and Fanny, two likeable characters who have both been abandoned in one way or another. The story is perfectly paced; dialog is natural and realistic. 1971 comes complete with a surprise ending that will warm the cockles of your heart.

Don’t miss this book. McGowan’s sparse and powerful writing reminds me of Kent Haruf, one of my favorite authors. I look forward to more from this Arkansas author.

Favorite Quote: She hadn’t noticed the energy it took trying to mitigate another person’s troubles. The Personal Librarian is based on the true story of Belle de Costa Greene (born Belle Marion Greener). When Belle is hired by financier J. P. Morgan to curate the Pierpont Morgan Library in New York, she is positioned to become one of the most influential women of her time in the art and book world.

But Belle lives under the burden of a huge secret. She isn’t who she seems. Belle is a fair-skinned black woman passing as white. And, she must conceal her true identity at all costs. (The sad irony is that she is the daughter of Richard Greener, an attorney, civil rights advocate, professor, and the first African-American graduate of Harvard University.)

This fascinating story is told from Belle’s first person point of view making her thoughts and worries that much more intense. The Personal Librarian is well-researched and brimming with history, the setting rich in details about rare art and manuscripts. What a tour de’ force she must have been in real life. I felt such empathy for this brilliant woman who lived during a time when she couldn’t be both true to herself and successful. I was in between library books when I pulled this oldie off our shelf. I’d never read this classic, but our daughter had—the book was thoroughly annotated in her handwriting (read during high school, I’m guessing, as part of a language class assignment).

I became intrigued right off. Reading The Plague—set in the 1940s in a seaside village in North Africa—while living during coronavirus (the plague of the 21st century) felt a bit like viewing society through a looking-glass. This book might have been written in present time, detailing an account of how Americans in particular have reacted and behaved under pandemic conditions.

The denial, confusion, isolation, desperation, anger, clinging to religion—the Lord will provide—it’s all there, foretold in Camus’ book written decades ago.

But my goodness, what a durable, timeless tale. It’s a study in transcendentalism where themes include individualism, free-thought, nature, and spiritualism. Even while enduring the horror of the plague, Camus reminds us that humanity is basically good, although most of us never reach our full potential.

And my daughter’s tenth grade annotations? They were incredibly insightful and spot-on.

Favorite Quote: They were assured, of course, of the inerrable equality of death, but nobody wanted that kind of equality. Kay Summersby, a military driver during war-torn London, is conscripted to drive General Dwight Eisenhower on a fact-finding mission. After her first driving assignment, the general begins to request her on return trips to Europe. She is professional, detailed-oriented, and makes his job easier.

They take a liking to one another possibly out of mutual respect. During the following years, she becomes his confidant. He promotes her to secretary, and then, his personal aide. Kay frequently travels with Eisenhower on foreign missions and is typically present during high-level meetings. Newspapers both at home and abroad hint at their inappropriate relationship. (Eisenhower is married to Mamie, of course.) The military brass surrounding Eisenhower seems to adopt a “whatever it takes to keep Eisenhower happy” attitude. After all, he is supreme commander of the Allied forces.

Were Ike and Kay romantically involved or not? I’m not sure at this point we will ever really know. Some sources insist Kay was nothing more than a highly valued staff member. Others insist Kay and Ike were lovers, and that Eisenhower considered divorcing Mamie. (He did help Kay obtain American citizenship and a position in the U.S. military.)

In this book written by James MacManus, the affair is presented as real. Ike and Kay spans from their first meeting until several years after the final assault on Nazi Germany. For the most part, I found Kay to be a strong character, in no way innocent of her behavior—she knew Ike was a married man. Ike was portrayed as the dry, detached soldier I’ve always imagined him to be. Overall, the story held my attention and provided insight into the burdens borne by those tasked with great responsibility during wartime.

This book collapsed for me at the end. A few of Kay’s final actions and reactions felt completely out of sync with her personality. I would have ended the story a few chapters earlier, leaving the reader with a more resolute Kay.

Favorite Quote: A woman in love will believe anything. That’s it for my January book reviews. I hope you’ve found a story or two to add to your stack.

What are you reading this week?