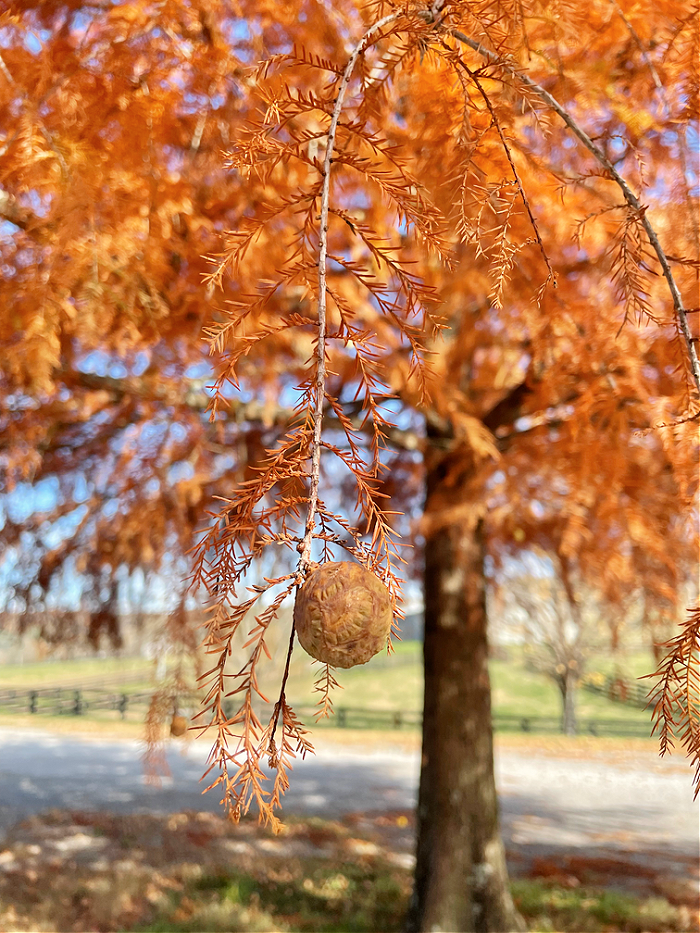 I met the most gorgeous bald cypress while at Rockvale Writers’ Colony in Tennessee. The tree was impossible to ignore, so brilliantly clothed for autumn. And her place on the property—just outside the cabin where I stayed the weekend—invited my attention each time I walked to the main house for meals and writing sessions, each time I sat at my desk in the loft and stared out the window trying to dream up something to write.

Really, I believe the tree would draw anyone’s attention from anywhere nearby.

She was the only one of her kind I noticed during my drive through middle Tennessee.

Bald cypresses are abundant in the oxbow lakes near the Mississippi River, their knobby knees a whimsical sight to see. They grow in the lake in Wilson, Arkansas, near my childhood home, and throughout many swampy areas in the South. But a bald cypress in the rolling hills near Franklin, Tennessee was surprising to me, the area more suitable for oaks and hickories, black locust and ash.

However the tree came to be growing in that particular place, I was happy to meet her. When I stood beneath her strong straight trunk, her canopy soared into the blue sky. Her heavy and dense seed pods hung like Christmas ornaments. I always assign male or female pronouns to non-human creatures, but actually the bald cypress (Taxodium distichum) is a monoecious plant, meaning each tree produces both male and female flowers. (For lots of interesting info on the bald cypress, check out this article from SFGate).

I’m pretty sure each retreat attendee talked to the bald cypress at one point during the weekend.

And then…. I left the retreat on Sunday morning. During my four-hour drive back to our farm in northeast Arkansas, I thought about the other writers I had met, how genuine and selfless everyone seemed and how cohesive a group we had been almost immediately. I thought about how much I enjoyed the nature-writing sessions. In such a short period of time, a door in my mind had flung open, and I drove away with fresh writing ideas, new things to say.

I thought about the writers’ colony, the surrounding nature and landscape and how I didn’t have enough time to do all the exploring I wanted to do. (A great excuse to return when I can stay longer!)

And I thought about the beautiful trees around my cabin and the main house, including the bald cypress.

As I drove over the Mississippi River, I began to think of home again. And I began making a mental to-do list of things I need to accomplish.

I pulled into the gravel driveway at the farm just as the fiery sun began to melt into the horizon.

And there in the front yard was our very own bald cypress.

Seeing But Not Seeing

We do this all the time, don’t we? We see things without really taking them in.

I can tell you everything about the trees growing around the house when I was a kid. I climbed them, sat beneath them, mowed around them, smelled their blossoms, tagged them during a game of chase, picked up their pecans in the fall. But as trees have died and new ones have been planted, I’ve never really gotten to know those that came to live on the farm after I left.

While I knew the bald cypress was there, I’d never truly seen it.

I’d never stood beneath it or touched its bark.

So, I fixed that right away!

The Thing About Noticing

As children we viewed them with wide-eyed imagination. As author John Knowles said, trees were the first giants of our childhood.

I believe if we could harness that child-like enthusiasm, even for a little while each week, the world and her people would be more content.

P.S. If you have the opportunity to visit the Louisiana Purchase Historic State Park in Holly Grove, Arkansas, and/or the Toltec Archeological Mounds in Scott, Arkansas, please don’t miss either! There are lots of cypress trees growing in both areas, not to mention the incredible history surrounding both sites. Also, one of my bucket list things is to hike to the Arkansas Champion Bald Cypress located in the Dale Bumpers White River National Wildlife Refuge not too far from DeWitt, Arkansas. The last time I was in the area, the trails were closed for the season.