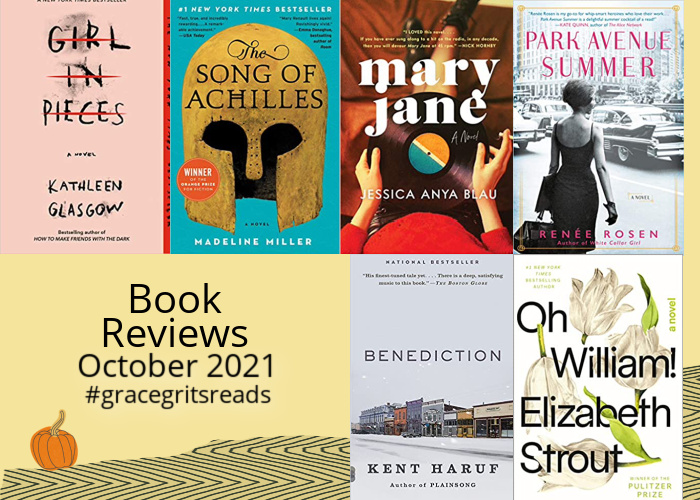 Today I’m sharing my reviews of the books I read in October. My reading was stymied a bit because I am deep into editing my next book. And also, I binge-watched Ted Lasso and The Morning Show. So there’s that.😉

Still, I managed to read six great books in October. Maybe you will add one or two of these to your stack. 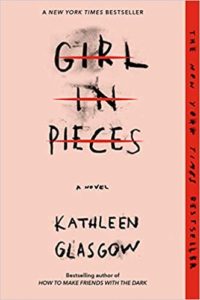 Charlotte (Charlie), the young protagonist in Girl in Pieces, is one tough character. When she leaves the hospital after trying to slit her wrists, she starts over with nothing. She has lost her family, her best friend, parts of herself.

Girl in Pieces takes on the heavy issue of self-harm, reminding me of an updated Girl, Interrupted (but with a more likable character). And even though the subject matter is weighty, the story is not without hope.

I really rooted for Charlie. By the end, I was fully vested in her journey toward healing.

An important takeaway—recovery is an ongoing endeavor that never really ends.

I chose the Audible version of Girl in Pieces because I am a huge fan of narrator, Julia Whelan. The story is quick-flowing and engaging, and the narrator is top-notch.

Favorite Quote: People should know about us. Girls who write their pain on their bodies. I’ve been enamored with Greek mythology since Mrs. Ashley’s 7th grade English class. The Song of Achilles is a modern take on an old classic, and it’s told from the POV of Patroclus who is besotted with Achilles. Through Patroclus’ eyes, we follow young Achilles through his boyhood training in war and medicine to the years of the Trojan War, when he claims his destiny as the greatest warrior ever.

The Song of Achilles is historical fiction wrapped around a romance to rival Romeo and Juliet.

I enjoyed becoming reacquainted with many of my favorite gods and goddesses. And, even though the fateful ending was written in the stars long ago, I found Miller’s retelling of the Trojan War to be fresh and lovely.

Favorite Quote: We obey our kings, but only within reason. During Mary Jane’s 14th summer, she secures her first job as a nanny for Izzy, the 5-year-old daughter of an ‘anything-goes’ family living nearby. Izzy’s parents, along with two famous people (a rock star and an actress/model) who are living with them, provide quite the education to this conservative young girl from Baltimore.

Mary Jane is a funny and fun read, a slice-of-life type story, an enjoyable escape. It took me back to the 1970s when appliances were avocado-green and Tiger Beat magazine was all the rage.

I know one thing for sure—my mother kept much better tabs on me in 1975 than Mary Jane’s mother did!

Favorite Quote: Something was going to unravel and I felt like I was the person who was holding the loose string, about to pull and watch it all fall apart. In 1965, Alice Weiss leaves her small-town life in the Midwest with the goal of becoming a photographer. Through a friend of her deceased mother, she secures a job as secretary to none other than Helen Gurley Brown who has recently been hired as editor of Cosmopolitan Magazine (the first female editor, I might add). As Brown fights to install her sexy vision to a magazine with dismal sales, Alice is determined to be her number one supporter.

Park Avenue Summer is described as Mad Men meets The Devil Wears Prada; I agree to some extent. The time period and New York setting definitely has a Mad Men vibe. But I imagine Helen Gurley Brown was much more vibrant and vivacious than the character (Anna Wintour?) behind The Devil Wears Prada fame.

My favorite part of this story was learning more about how Brown revamped the magazine, and her innovative approach to marketing. Although the book is fiction, it is based on the author’s extensive research.

Here’s an interesting thing to do: Google the 1965 Cosmo cover (the first issue Brown was in charge of), and see what was considered highly scandalous at the time. My how things have changed. Young ladies wear much, much less to football games today.

This book made me a little nostalgic for those years when Momma always had a stack of Cosmopolitan Magazines and my sister and I took the quizzes as though we had any idea what being a Cosmo girl entailed.

With everything gained, something is lost. This story made me think about this concept.

Favorite Quote: Most important, I had discovered what I deserved. 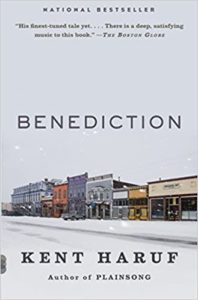 In Benediction, Dad Lewis is diagnosed with cancer and not given long to live. As he faces the end, he reflects on his life and comes to terms with his regrets. In Haruf’s thoughtful and sparse style, other characters—friends and neighbors of Dad— also grapple with everyday living.

The story is real life. It’s meaningful and full of grace. And I didn’t want it to end.

To tell you the truth, I’m in mourning. I had read all of Kent Haruf’s novels, except this one, Benediction. And now that I’ve read it, I have no more Haruf novels in my ‘can’t-wait-to-read’ pile. (He passed away several years ago.)

It was appropriate that I saved Benediction for last. Of course, I will read his books over and over again. And I will find new things to love because books settle into our bones differently with each reading. But still, unless someone finds one of his unpublished manuscripts stuck away in a trunk somewhere, there will be no more quiet brilliance from him.

In Benediction, Haruf captured the precious ordinary. And for that I say, “Thank you and amen.”

Favorite Quote: They don’t come to church on Sunday morning to think about new ideas or even the old important ones. They want to hear what they’ve been told before, with only some small variation on what they’ve been hearing all their lives, and then they want to go home and eat pot roast and say it was a good service and feel satisfied. In Oh, William, we return to the witty, indomitable Lucy Barton who is now 63 and recently widowed after the death of her second husband, David. Throughout her life, Lucy has remained good friends with her first husband, William. And in this story (third in a series), Lucy and William set out on a trip to uncover more about a recently revealed family secret.

Oh my! I love the stream-of-consciousness way Lucy Barton thinks, and because I listened to the Audible version of this story, I felt I was in the car with Lucy and William, traveling through Maine with them.

There’s lots of introspection in this one. Lots of looking back on the history of Lucy and William, their early marriage and the raising of two daughters. Lucy is flawed. She seems fragile and defensive at times, but she is someone who would guard your secrets and lend you a hand when you need it.

Strout’s latest is about the importance of relationships.

(Oh, wow! I’ve not read the second in this series.)

Favorite Quote: This is the way of life. The many things we do not know until it is too late. Alrighty, my Book Reviews for October 2021 are official. I hope there’s something on this list that sounds intriguing to you.