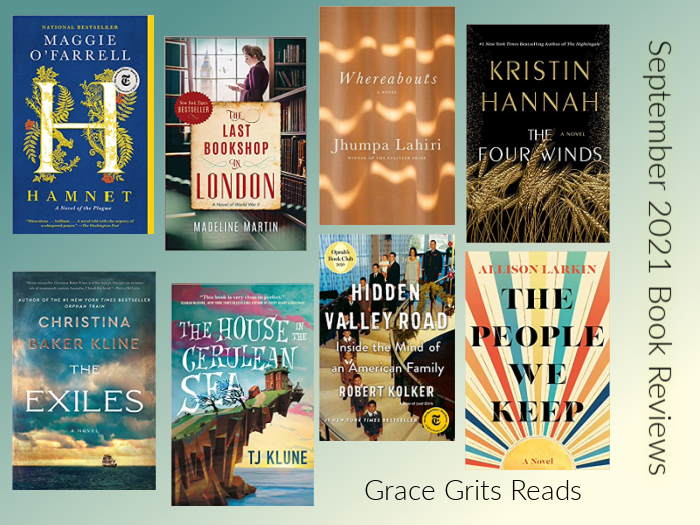 Hey friends! Today I’m sharing my reviews of the books I read in September. I enjoyed these books for different reasons. From the 1500s to present day, I met the magical and mental, I cried with and cheered for amazing protagonists that will not soon be forgotten. I hope you find a story in my September Reads to add to your list. My high school English teacher, Barbara Key, brought Shakespeare alive in our classroom the Arkansas delta. Still, as I read Hamnet, I realized just how little I knew of the man, William Shakespeare, and his life.

Hamnet is a fascinating and well-written period piece set in Warwickshire in the 1580s during the time of the Black Plague. The story begins when young Hamlet (nicknamed Hamnet) searches for someone to aid his eleven-year-old twin sister, who has suddenly been struck ill.

I was hooked from the first page; O’Farrell’s writing is hypnotic.

Very few things are known about Agnes (Anne) Hathaway and William Shakespeare (whose name is never referenced in the book). And while this particular story is historical fiction, the threads of fact O’Farrell used to weave this story of love and loss, family and endurance make for a gorgeous tale. Christina Baker Kline is one of my favorite authors—historical fiction doesn’t get much better than her prior works, The Orphan Train and A Piece of the World.

The Exiles is another compelling read.

Set in the early 1800s, The Exiles brings to light the horrific treatment of British women sentenced to prison for petty crimes and sent to serve out their time in a remote Australian penal colony. Also at the center of the story, the appalling treatment of the area’s native aboriginals.

In The Exiles, Kline took on a monumental narrative, introducing us to a group of brave women with disparate storylines—Evangeline, Hazel, Mathinna, Olive. My only criticism = a few of the characters were better developed than others. I love when a story teaches me something I didn’t know. This one took me on an emotional journey. Bravo to Kline for another well-paced and well-researched novel. 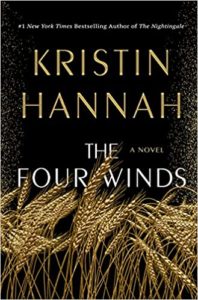 The Four Winds may be the most depressing book I’ve ever read. Don’t get me wrong, this story of the Dust Bowl and the family who left the Texas Panhandle in search of a better life in California kept me enthralled, but a feel good read, it is not. (Nor would I expect a book in this setting to be.)

Elsa, the protagonist, is a strong-willed young woman with two children and a desire to provide them with a better life. The descriptions of the relentless dust storms and struggles to escape are heartbreaking and well-written. Later, the story seems more politically slanted with a focus on Communism. The story ended on a hopeful note, but man alive, I don’t know how anyone survived such conditions or such inhumane treatment from fellow Americans.

Oh wait, sure I can. It’s a tale as old as time, only the specifics have changed.

I’m a big fan of Kristin Hannah, and while this wasn’t my favorite of her works, The Four Winds portrays a time in our nation’s history that must never be forgotten. The story is fictional, yet the events are based on truth. What a testament to the resilience of those pushed to the brink.

Favorite Quote: Be brave…or pretend to be. It’s all the same.

The Last Bookshop in London:
A Novel of World War II
by: Madeline Martin
(Historical Fiction) 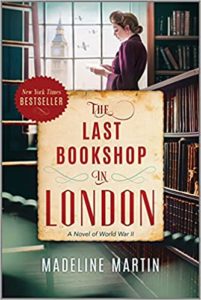 Just before The Blitz, Grace and Viv move to London in search of excitement. They live with Grace’s late mother’s friend, Mrs. Weatherford. Viv secures a coveted job at Harrod’s, while Grace, who has no letter of reference, becomes the employee of the curmudgeonly owner of Primrose Hill Books. Grace isn’t a reader, but she sets her sights on cleaning up the disheveled place. Handsome customer, George, adds romance to the story.

As war looms and bombings become more frequent, the story portrays average people surviving such a dark time in history. The story is not without sadness, but overall it is charming and inspirational, a reminder of how people can come together to help each other.

Favorite Quote: Reading is…going somewhere without ever taking a train or ship, an unveiling of new, incredible worlds. It’s living a life you weren’t born into and a chance to see everything colored by someone else’s perspective. Jhumpa Lahiri speaks straight to the soul in this lean, rich, poetically-flowing novel about a woman who feels both lost and free, brave and frightened, torn between wanting to belong and wanting to be alone. Her writing cuts close to the bone, each sparse word is precise and perfect.

I read Whereabouts in one afternoon, devoured it like a box of decadent chocolates even though I desperately wanted to savor every paragraph.

Favorite Quote: The city doesn’t beckon or lend me a shoulder today. Maybe it knows I’m about to leave.

The House in the Cerulean Sea
by: T J Klune
(Fantasy Fiction / LGTBQ) Linus is a long-time caseworker at the Department in Charge of Magical Youth. When he is plucked from the employee pool and sent on a top-secret, special assignment, life quickly becomes more colorful.

This quirky fairytale includes magical, different characters and layer upon layer of morality lessons. While many of the lessons were saccharine sweet and simplistic, I wondered if we haven’t reached the point in our society where we need to be slapped in the face with basic ethics.

The Wizard of Oz meets the Island of Misfit Toys perhaps?

Yes. But sometimes cheese is good.

The House in the Cerulean Sea has been highly decorated with book awards. For me it was a much-needed escape to an island where people are appreciated for their differences.

Favorite Quote: Don’t you wish you were here?

Hidden Valley Road:
Inside the Mind of an American Family
(Biography/Memoir) Hidden Valley Road is the true story of one American family’s struggle with mental illness. Don and Mimi Galvin had twelve children (born between 1947 and 1965). Six of the ten boys were diagnosed with schizophrenia. Don, a career serviceman, was often working and away from the home. Mimi struggled to provide for so many children, often leaving the two youngest (daughters) with the older boys. While the parents put forth an all-American facade, the home was quite the opposite. Her attention was always focused on the ill son(s). The healthy children suffered mightily from neglect and abuse.

Interwoven through the story is the study of mental illness. When the Galvin children were growing up, little was known about schizophrenia. Nature vs nurture was highly debated, and the mother was considered a prime influence as to the development of schizophrenia.

Over time, the Galvin family contributed DNA and became instrumental in the on-going study of this illness.

A fascinating yet horrifying read.

Favorite Quote: This could be the most mentally ill family in America.

The People We Keep
by: Allison Larkin
(Coming of Age Fiction) After being abandoned by her dysfunctional family, April leaves home in search of something better. She’s a sixteen-year-old wannabe singer/songwriter. She’s strong and scrappy yet naive in many ways. As April moves from place to place, making less than ideal choices, I quickly became invested in her situation.

Larkin has created several well-developed characters. My only criticism is how quickly a few of April’s relationships form (or maybe I didn’t quite follow the passage of time). Regardless, the story tugged at my heartstrings.

The People We Keep is about people who come into and out of our lives, often fleetingly, and the impressions they leave behind, often permanently.

April is someone you’ll want to keep.

I listened to the Audible version; the narrator did an A+ job. Alrighty. As you can see, I did quite a bit of reading in September, and I enjoyed all of these books.

Do any of these sound good to you?