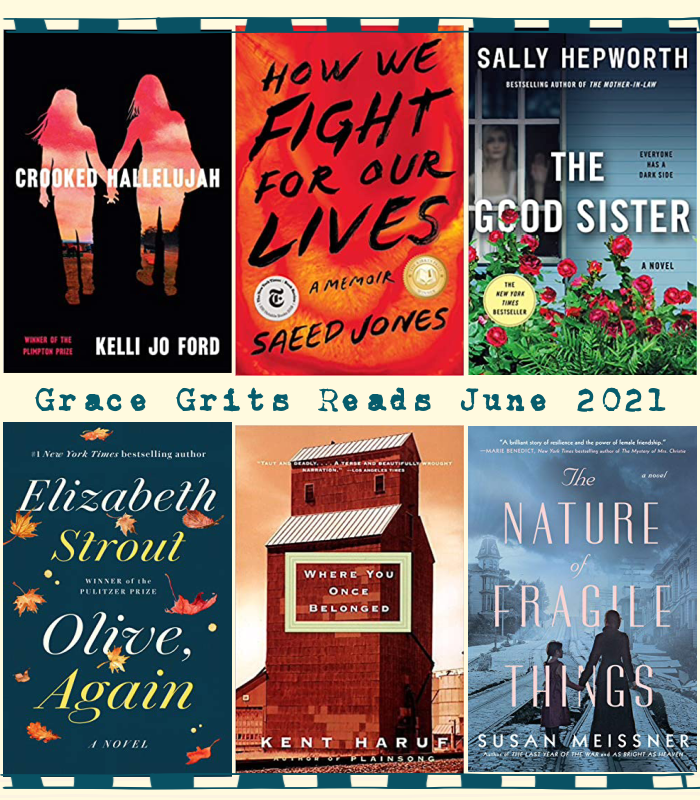 With my book reviews for June 2021, we are officially well into the season of summer reading. Do you choose books based on the time of year? During summer, I may choose something lighter (especially if I’m on vacation), but mostly I keep whittling away at my to-read stack.

My book reviews for June 2021 include six completely different books—two debuts from new authors, two from authors I love, and two books from experienced authors who are new to me. I hope you find at least one to add to your summer reading book pile. First of all, the title of this book—Crooked Hallelujah—is inspired. Love the title, love the cover, and yes, sometimes I do choose a book based on these elements.

Secondly, it started off with a loud AMEN from me, and I thought I’d found my favorite read of the year so far.

This novel (really, a collection of linked stories) is a character study of four generations of Cherokee women. Although the story quickly became a tad disjointed for me (jumping around in time with no warning tends to make my head spin), the reader is given much to ponder concerning the strength of matriarchal bonds, extreme poverty, and the idea that often what we believe and how we react is learned behavior.

It was a good read, but I didn’t shout hallelujah at the end. I look forward to this author’s next offering.

Favorite Quote: Can I love anything the way that I used to love the mystery of my mother, her strength in suffering?

Where You Once Belonged
by: Kent Haruf
(Small Town Rural Fiction) Kent Haruf’s writing always hits the perfect chord with me. Where You Once Belonged was written in 1990, one of his earlier works, and like his others, takes place in Holt, Colorado where the town is as much a character as, well, the characters. The story is told almost entirely in flashbacks by an omniscient narrator, which sets a brooding tone right off.

Most every small town has a prodigal son, doesn’t it? Holt’s own—Jack Burdette—was a high school football star who had an unproductive stint in college, joined the service, and is later handpicked to manage the local farmer co-op. It seems the more life demands of Jack, the more havoc he wreaks.

Haruf (who passed away in 2014) was never one to waste words. And with the few words he chose for Where You Once Belonged, he told another memorable story.

Favorite Quote: In the end Jack Burdette came back to Holt after all.

How We Fight for Our Lives
by: Saeed Jones
(LGBTQ+Biography) 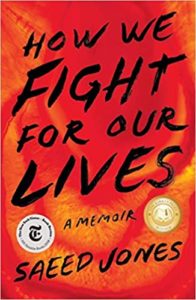 Whoa. This short memoir packs a punch. From Saeed’s childhood as a young gay black pre-teen in the South through his college years at Western Kentucky and to his career as a writer and professor, the author bares his soul and shares his grief, his basic struggle to simply be.

As a poet, Saeed’s prose is beautiful, but the book is shockingly graphic at times, a series of traumatic events, one after another. That’s his truth; bravo to him for telling it. How many other gay black men grew up with a similar journey?

Favorite Quote: Everyone has a lie we’re quietly waiting to believe. This was my first Sally Hepworth book (recommended by a friend), but it won’t be my last. Twins, Fern and Rose, are as different as different can be. Fern has sensory processing problems, works as a librarian, and depends on Rose for much of what makes her life work. Rose is considered the responsible, level-headed one.

Which one is good?

The Good Sister is classified as a domestic thriller. I viewed it more as a psychological family drama. Think Eleanor Oliphant is Completely Fine meets Gone Girl—a suspenseful story with offbeat characters told in alternating chapters between the sisters, both who are rather unreliable narrators. Engaging for sure.

Favorite Quote: My sister holds the key to my sanity. Oh, Olive. She’s back again, older, still socially inept, charming in that uncomfortable, curmudgeonly way of hers. Once again, Strout captures small-town people with relatable issues. I adore the way Olive weaves through the narrative of each person, showing up to help when no one else will, trying to make things better in her own way.

The first book in this two book series, Olive Kitteridge, won a Pulitzer. I enjoyed Olive, Again even more than the first. Olive is such a beautifully flawed human with a keen sense of insight and a sharp sense of humor. I, for one, enjoyed spending time with her again even though she does and says things that make me cringe. This book had me at mail-order bride and the San Francisco earthquake of 1906. Either of these things is enough to make me pick up a book. (I swear I must have been a mail-order bride in another life.)

Irish immigrant Sophie Whalen leaves her dreadful life behind and heads west, becoming the handsome Stephen Hocking’s mail-order bride and step-mother to his five-year-old daughter, Kat. Life is much better at first—she has a lovely home in San Francisco, a daughter to care for, food and clothes, really, everything she has ever wanted. Even though Stephen is aloof and Kat is mostly silent—Sophie attributes this to normal grief—comfortable routines develop and life settles around them. But then, a visitor shows up on her doorstep bringing devastating information. In an instant, life is turned upside down. The San Francisco earthquake underscores this.

Yes, life is fragile. It’s even more fragile when built on shaky ground.

The Nature of Fragile Things mesmerized me. Now I’ll go back and read Meissner’s other books. Thanks for reading my book reviews for June. Now, onward to July reads.