I didn’t do as much reading in April as I would have liked. When the garden calls, reading takes a back seat to weeding and planting and mulching. Still, I managed to squeeze in a few pages.

From the islands of the Pacific Northwest to the swamps of South Carolina, I met immigrants and foster children, the homeless and reckless and those simply treading water. Oh wait, that’s all of us, right?

I hope my April book reviews stir your interest and maybe even send you off to the local library or indie bookstore. A girl can’t garden 24-7.

The Girl Who Wrote in Silk
by: Kelli Estes
(Historical Fiction) This lovely debut novel set in the San Juan Islands weaves together the stories of Inara Erickson, a present-day college graduate, and Mei Lein, a young Chinese-American in the late eighteen hundreds. One young lady is attempting to restore and convert her deceased aunt’s island estate into a boutique hotel; the other is trying to survive a dark period of American history.

The current-day section of the book makes for an entertaining tale, complete with a grown-up Nancy Drew mystery and a handsome love interest (but it isn’t sappy sweet). The historical flashbacks provide an eye-opening education on racial intolerance toward Chinese-Americans, including a lesson on the Chinese Exclusion Act of 1882.

This fictional dive into the history of a particular place is a truthful reminder of our forefathers’ hardships. In The Girl Who Wrote in Silk, author Kelli Estes thoughtfully bridges past to present without being heavy-handed. An enjoyable read for fans of both historical and mainstream fiction.

Favorite Quote: If she gave in to the pull of the water, what would it matter? The very first sentence of this book grabbed me and still hasn’t let go. The characterization of the three central protagonists—all strong southern women—was brilliantly done.

Gertrude is married to a worthless drunk. She has four kids to protect, and her family is poorer than dust. Annie is the matriarch of a well-known family. She helps oversee the plantation and runs the sewing circle. Retta is a first-generation freed slave. She works as a housekeeper to Annie and befriends Gertrude. All three women are fiercely determined with rich voices and unforgettable personalities. And the secrets they keep? Like the murky swamp nearby, their secrets threaten to swallow them.

Call Your Daughter Home is set in South Carolina in 1924, before the Great Depression and after the infamous boll weevil infestation. Every scene brings heat and emotion that cuts close to the bone. I listened to the audible version, and the narrators were spot-on. A gritty southern masterpiece if ever I’ve read one.

Favorite Quote: It’s easier to kill a man than a gator, but it takes the same kind of wait. For decades, author Donald Gean worked as the director of a homeless shelter in Alfred, Maine. Now, in Five Old Guys, Gean preserves the memory of those he served, a colorful cast of characters, many suffering from drug addiction and mental illness, all real people needing a helping hand and dose of respect.

Gean’s straightforward writing style is empathetic and pragmatic; his dry sense of humor lightens a weighty subject. While highlighting each character’s quirks and personality, the author’s passion and concern over the plight of homelessness is evident. The reader is blessed to spend time with each homeless soul portrayed and with Gean, who leaves his heart within the pages.

Favorite Quote: …as long as the heart continues to beat, and there is still at least one other human being who continues to support the sick drunk or junkie, there is a chance they will one day change that behavior.

The Reckless Oath We Made
By: Bryn Greenwood
(Fiction) Zee (short for Zhorzha) works as a waitress, sometimes sells drugs, and occasionally trades sex for things she needs. Her mother is a 600-lb hoarder; her dad died in prison after a bank robbery gone wrong. If anyone ever needed a champion, it’s Zee.

She finds one in Gentry.

Gentry is on the autism spectrum. He is kind and gallant and a bit naive. His inner voices convince him of his duty to protect Lady Zee. Because he views himself as a knight, he ONLY speaks in Middle English. Tis my honor to carry thee whither thou desirest. (Not gonna lie—until about midway through the book, this wore me out. Then, I mostly adjusted to his medieval speak and realized this was simply who Gentry was.)

The plot is as offbeat as the characters. When Zee’s sister is (possibly) kidnapped, Gentry is more than willing to pack up his swords and help.

Two things I can say about Bryn Greenwood—she knows how to create the perfect white trash character, and she doesn’t waste her time writing mainstream stories.

With friendship and family and loyalty themes, there are a slew of things to like about The Reckless Oath We Made. Even so,  this book will certainly not be for everyone. I’m not entirely sure it was for me. Greenwood’s previous novel, All The Ugly and Wonderful Things, set the bar super high. Methinks her newest effort hath fallen a tad bit short. But what doth I knoweth? The Lady Greenwood is a New York Times best-selling author. Alas, I am not.

Favorite Quote: Money always decides whether things get better or worse. They never stay the same. 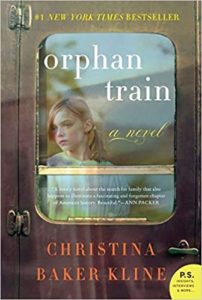 18-year-old Molly has been kicked out of her most recent foster home and needs fifty community service hours to avoid juvenile detention. When she signs on to help 91-year-old Vivian sort through her cluttered attic, an unlikely friendship develops. Molly learns of Vivian’s past, and Vivian is empathetic to Molly’s situation.

Vivian’s story flashes back to her childhood during the orphan train movement (something I knew nothing about), when destitute, abandoned, and stranded children in the East were sent to the Midwest on trains (between 1854 and 1929). Orphan trains served as a type of mobile adoption system/early foster care, and Vivian was one of these children.

The parallel stories of Molly and Vivian provide a lesson in friendship. Vivian’s thread, in particular, underscores immigration prejudices that have been a deep-rooted part of our history. It’s about loss and memory and the resiliency of human nature. Crazy to me that I am just now reading this jewel published in 2013!

Favorite Quote: People who matter in our lives stay with us, haunting our most ordinary moments. Thanks for reading my book reviews for April. Now, on to May reads!

What are you reading, and what’s in your to-read stack?