Hello my devoted reader friends! Another month means more books to read and review. My book reviews for March 2021 are a mixed bag in every sense. A couple of the best-sellers I couldn’t wait to get my hands on turned out to be disappointments. My absolute favorites were those you’ve probably never heard about. This is why I strongly believe it’s important (and rewarding) to seek out books written by unknown authors.

Books with the largest marketing budgets may not necessarily be the most compelling or best written. At least, that has been my experience.

Of course, to each his own. The ones that spoke straight to my heart may not be your cup of tea. Those that I barely finished may be your end all be all.

That’s okay. And aren’t we glad? In The Henna Artist, we get to know thirty-year-old Lakshmi, who left an abusive marriage to become a sought after henna artist to the wealthy women in Jaipur. Lakshmi is a compelling and likeable main character. She has brains, independence, and gumption.

When her husband reappears with—surprise!—her younger sister in tow, (she didn’t know she had a younger sister), Lakshmi struggles between the new life she has painstakingly carved out for herself and familial duty.

The class system and social mores of India in the 1950s provide a structured backdrop for the author’s rich storytelling. The aroma of healing herbs and brightly dyed silks immerses the reader in a vibrant, unforgettable setting. The story is thought-provoking too. Is success ephemeral? Or, is it as fleeting as the artwork Lakshmi creates?

So far, The Henna Artist is one of my favorite reads this year. Here’s the scene: A group of random people visit an apartment open house and are taken hostage by a reluctant bank robber. During the hours they are together, the “hostages” learn of each other’s hang-up. They begin to bond. Yes, they judge one another.

An unexpected twist surprised me.

Anxious People provides a different way of looking at how paths cross only to re-cross years later. We are reminded that people carry unseen burdens, often quietly and invisibly, and that humans are more than the bad things they’ve done.

This dialog-based story would work well as a stage performance. (Instead of Twelve Angry Men, Twelve Anxious People?)

Anxious People included important underlying themes, but I found it lacked the feel-good charm of Backman’s other books.

Have you read it? I’d love to know your thoughts.

Favorite quote: If our past was all that defined us, we’d never be able to put up with ourselves.

The Tie That Binds
by: Kent Haruf
(Fiction) Eighty-year-old Edith Goodnough is lying in a hospital bed with a police officer waiting outside her room. She’s been charged with murder. Sanders Roscoe, Edith’s friend and neighbor and the narrator of this story, is the person who likely knows what happened.

The story, set in Colorado, 1977, is about sacrifices made in the name of family, and the hardships of rural farming on the high plains. As can always be expected of Kent Haruf books, his writing is thoughtful and quiet, filled with heartbreak and humor.

If like me, this story somehow slipped through the cracks of your life, OR, you’ve never read this author, oh my—a lovely treat awaits. Seriously, if Kent Haruf penned the Manhattan phone book, I would read it. Sadly, he is deceased. Unless an old manuscript is hidden away somewhere, what we have from him is all there will be.

Favorite Quote: She was uncomplaining with plenty to complain about.

The Splendid and the Vile:
A Saga of Churchill, Family,
and Defiance During the Blitz
by: Erik Larson
(History) This 600-page saga begins in May 1940 and follows Churchill’s crucial first year as Prime Minister. Using diaries and letters and other documented news, Larson brings us a detailed (and nearly) day by day account of Churchill’s personal and professional life during the Blitz. We get to know many of his family members, including his wife and daughter, as well as government officials/confidants closest to him.

History fascinates me, especially the world wars. Larson primarily focused on the culture of the times, the partying and tennis-playing and love interests of those within Churchill’s circle. I found the laissez-faire, live-and-let-live attitude of so many during such a dire time to be surprising. (Of course, I benefit from hindsight.) The most compelling parts for me involved glimpses into Churchill’s character and heart, his decision-making and oratory skill, his immediate and strong distrust for Nazis, and his constant efforts to lure Roosevelt into the war.

I’m glad I read it; but man alive, I was relieved when it was over. Parts of the story were tedious and repetitive. Larson certainly involved the reader in air raid after air raid, but overall, the story did not hold my attention the way The Devil in the White City did.

Several times, I wondered how these same events would play out today? During a time when much of Britain and the US wanted to appease Hitler, Churchill lead the people through fear to courage.

Favorite Quote: You knew the fate of civilization was being decided fifteen thousand feet above your head in a world of sun, wind and sky.

Did My Mama Like to Dance?
and Other Stories about
Mothers and Daughters
by: Geeta Kothari
(Women / Short Essays) 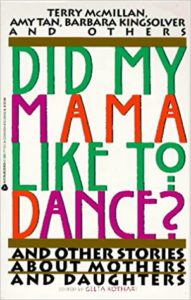 I discovered this short book of essays at the Dickson Street Bookstore (Fayetteville’s gold mine for used books), and bought it primarily because Terry McMillan and Barbara Kingsolver contributed to it. In this collection of 15 stories, my favorite turned out to be written by Kate Braverman, an unfamiliar-to-me author who died in 2019.

Not everyone enjoys short stories, but I find well-written ones to be real gems. No fluff. Every word counts. For a mere two bucks, I certainly found a treasure in this collection. Can someone tell me why so many mother-daughter relationships are dysfunctional?

If you enjoy well-crafted stories/essays, consider this one.

Favorite Quote: She gave me back my life before I realized that it was not mine. 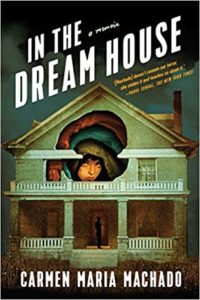 What an inventive memoir. Written in fragmentation style (which I love yet rarely see, especially in a full-length book), this story about partner abuse is literary, disquieting, a true work of art.

In the Dream House will probably not appeal to those who prefer feel-good, traditional storytelling. But for those looking to dig deeper, who marvel over inspired writing, this is a narrative to study and savor.

Thank you Susan Olding for the recommendation!

Favorite Quote: The trouble with letting people see you at your worst isn’t that they’ll remember; it’s that you’ll remember.

The Feather Thief:
Beauty, Obsession, and the
Natural History Heist of the Century
(Non-fiction / Crime) Oh where to begin?

The book is written in several parts, starting with history.

Over a century ago, Alfred Russel Wallace (a contemporary of Charles Darwin), explored the most remote parts of the world, gathering and documenting bird specimens. In The Feather Thief, the reader learns of Wallace’s explorations, as well as the devastation the millinery industry had on birds. Back in the day, feathers were highly desired by society’s fashionable.

150 years later, we meet a suburban American kid, Edwin Rist, who is an over-achiever at everything he tackles including playing the flute and fly-tying. When Edwin is accepted into college at the London Conservatory, he leaves behind fly-tying for a short while. It’s an expensive hobby, and he has very little money.

BUT, in the truth-is-stranger-than-fiction category, the nearby British Natural History Museum contains one of the world’s largest collections of Victorian feathers (including many collected by Alfred Wallace). Yep. With a suitcase and barely any planning, Edwin pulls off the natural history heist of the century. He steals hundreds of rare bird skins and feathers, and for some time, no one notices.

I mean, they are just feathers… right?

The Feather Thief is the unlikely and weirdly fascinating story about obsession and the lengths someone will go to obtain the rare and elusive. The author (who only learns of this story by happenstance) becomes equally obsessed with uncovering the truth.

Nature / history lesson / fly-tying / ornithology / true crime—The Feather Thief is all these things. While this book may not be for everyone, I was enthralled. Hook, Line + Sinker. 😉

Favorite Quote: When the Titanic went down in 1912, the most valuable and highly insured merchandise in its hold was forty crates of feathers, second only to diamonds in the commodities market. That’s it for my book reviews for March. Like I said, a mixed group, right?

Do any of these book reviews pique your interest? For easy shopping, I’ve included my Amazon Affiliate links below. I earn a small commission if you purchase via my links.

On to April reads, everyone!

What’s in your book bag?