After a cold week of snow, brooding clouds, dark skies with only a sliver of moon, a little sunshine (I think), and lots of wind stirring up dry leaves that hitchhike into the kitchen via two schnauzers who are in and out, in and out, we greet another Sunday morning.

I was glad to see 2020 end, but honestly, I’ll be glad to have January behind us too. Seeing all the troops in Washington DC is surreal. The current state of our nation is surreal. I pray for calmer days ahead.

Those people who leave a pumpkin on the front porch through mid-January. It’s a pale gray-green pumpkin, called a Jarrahdale, and it’s one of my favorite varieties because of the interesting, ghostly color. I always leave my pumpkins out through Thanksgiving for obvious reasons. Pumpkins and Thanksgiving go together. Harvest, you know.

But Christmas rolled around, almost without warning. By then we had forgotten about the pumpkin, even though we see it every day when we bring the mail in, or when we fetch the Amazon boxes from the porch. You know how certain things begin to blend into the landscape? That’s what happened. When we finally put our lone Christmas decoration on the porch—our snowman— I decided, if I squinted, the pale green pumpkin sitting on a barn red bench looked Christmas-y. I pretended it was an ornament of sorts.

Already, I barely remember New Year’s Day or the first two weeks of January. Who has time to worry over a pumpkin when our country is arguing over democracy and such?

Today, the pumpkin is still there, firm and fresh, the beauty of never having carved this particular variety. Maybe it serves as a reminder of how quickly time passes, that if we don’t get our minds and houses in order, we will find ourselves outside in the cold.

Maybe it’s a reminder that standing out may feel uncomfortable but is necessary in certain circumstances.

Or, maybe it’s simply a pumpkin that came for Halloween and stayed for Martin Luther King weekend.

I sort of hate to get rid of it now. And I’ve only just realized, it’s like a chameleon. See how it has begun to blend into its habitat, its skin color almost an exact match of the house paint?

So yes, we’ve become those people. We did pack away the snowman for another year.

Check out these gorgeous Meyer lemons our soon-to-be next door neighbors brought us from their tree in Houston. What a joyful gift for the new year! 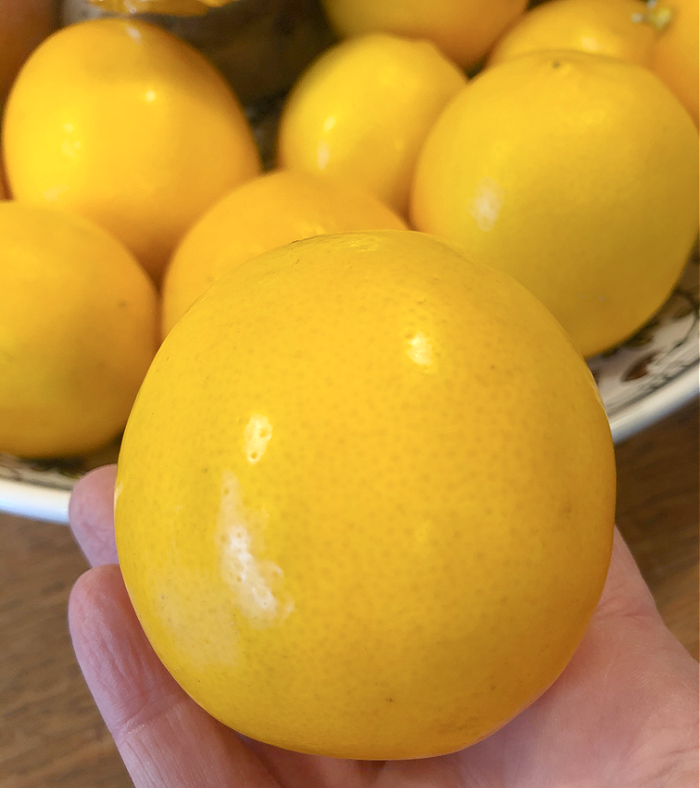 Meyer lemons are particularly fragrant. I wish you could smell them. I need to do something really special with these. Ideas anyone? I’m thinking maybe a Meyer lemon tart?

Meyer lemons are the cream of the lemon crop. A cross between a lemon and a mandarin orange, the taste isn’t as tart as a regular lemon. And, its supple smooth skin is oh so enviable.

Our neighbors also gave us this incredible lemon-ginger jam made from their lemons. Don’t you know they will miss their Meyer lemon tree when they move to Fayetteville? We will have to work extra hard to be good neighbors (like not leave Halloween pumpkins on our porch for months).

Three years ago on MLK weekend, my sister and I attended church services in Montgomery, Alabama, at Dexter Avenue King Memorial Baptist where Dr. King pastored from 1954-1960. Seriously, what a hallowed place. The old pews and hymnals, the welcoming congregation, the pastor who brought a thoughtful, humorous sermon—it was a Sunday morning I will never forget. Dexter Avenue King Memorial Baptist was founded in 1877 in a slave trader’s pen. (Named Dexter after Montgomery’s founder, Andrew Dexter.) In 1879, the congregation purchased a lot for $270.00 at the corner of Dexter and Decatur, a stone’s throw from the State Capitol. This became the church’s permanent location. Dr. King directed the Montgomery Bus Boycott from his office downstairs. The building was designated a national historic landmark in 1974.

“People often ask me, ‘What would he say were he alive today?’ He’s said it. We’re just not listening,” she said. “He beckoned us far above civility.”

I don’t have much to show for my productivity last week, but I did manage to repot my orchids. And boy-hidey, they desperately needed repotting. Next week, I’ll post a separate blog post outlining my steps for repotting your orchids. In the meantime, if you have an orchid that has stopped blooming, don’t throw it out. We will get it blooming again soon.

If St. Jude wouldn’t send me mail every single day, they would have more money for the hospital.

Thanks for reading another Sunday Letter written during the most unlikely of times, unlikely because everything I do lately happens with a small, often biting schnauzer attached somewhere to my body.

As we look toward to Inauguration Day, remember Dr. Martin Luther King’s words: We must live together as brothers or perish together as fools. Concentrate on peace and love. If you believe in a higher power, pray for our country and our leaders and the troops and police officers who are working to keep us safe.

No matter what you believe, be kind. Listen more than you speak. It’s difficult, I know.

P.S. The winner (Julie) of an Audible copy of American Dirt has been notified via email. Thanks for your interest!