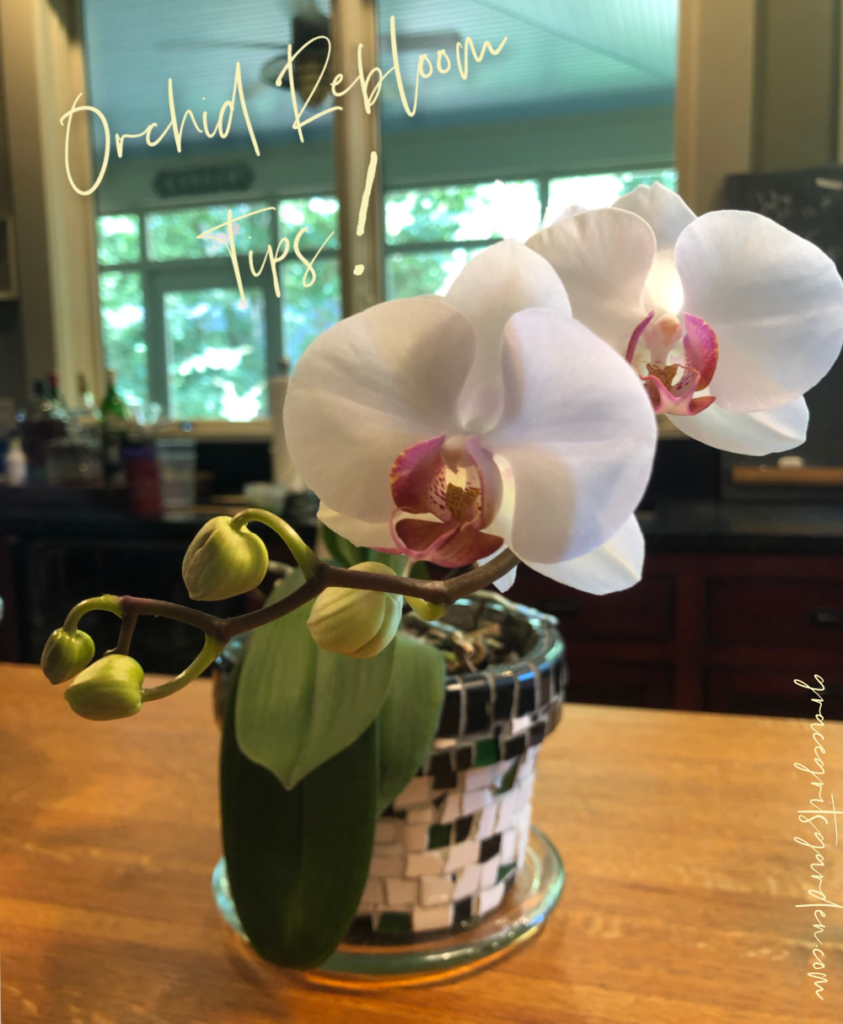 Several people have asked me for orchid rebloom tips, so here I go. (If you missed my big orchid reveal video, see it HERE.)

The phenomenon of reblooming orchids is relatively new for me. For years, my relationship with an orchid went like this: I would buy an orchid, enjoy it while it bloomed—we treated an orchid almost like a seasonal decoration—and once the flowers dropped off, I assumed that was that. I mean, we don’t buy them for the foliage. Right? I would usually move it to some out of the way place, like the porch, and forget about it until it shriveled. At that point, I didn’t feel quite so guilty about tossing it.

About four years ago, my relationship with orchids became more permanent because of light and ice.

First, you should know there are over 20,000 orchid varieties in the world. The two orchid rebloom tips I want to share are specific to the orchids I grow. Phalaenopsis (moth orchids).

Phalaenopsis orchids are considered one of the easiest varieties for beginners. This is the variety you likely see at many of the big box garden centers. If you are new to orchid growing, I recommend you start with this type.

Now on to my two orchid rebloom tips.

I don’t know which revelation came first, light or ice, but at some point I became more serious about trying to rebloom my orchids. After our annual holiday entryway orchid bloomed, I cut the stems down to the base and moved it to an out-of-the-way spot in the kitchen, my favorite place to overwinter succulents. 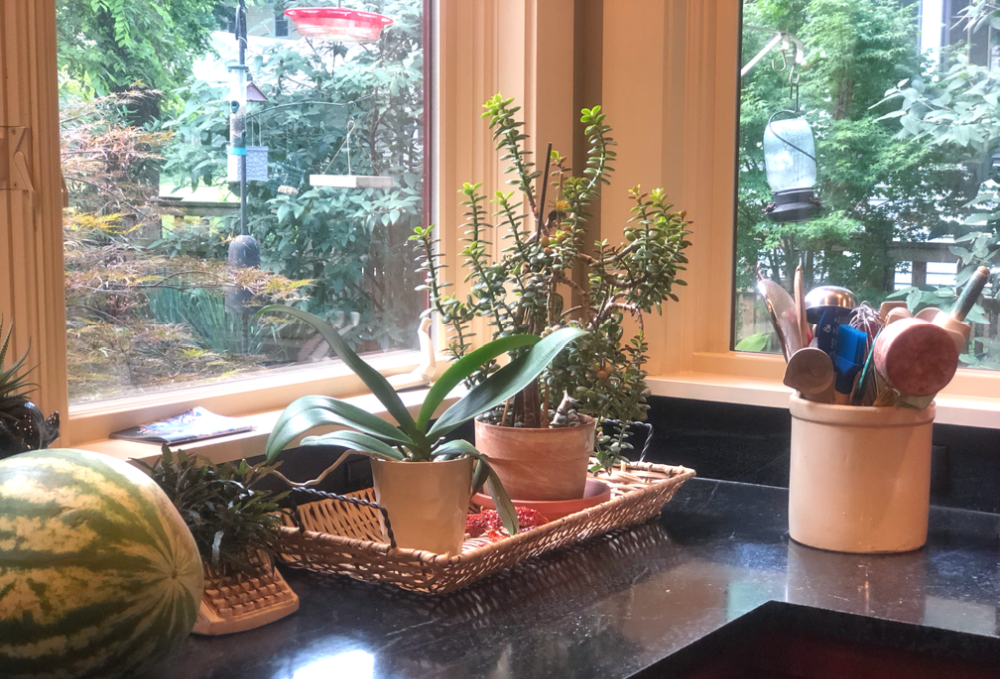 Everything thrives in this area because the bright, indirect eastern light is fabulous. Turns out, eastern light is perfect for orchids too. Really, I just got lucky to have such a perfect orchid-growing spot. Before we moved to this house in Fayetteville, our Dallas house had no such bright window. If you have a natural lighting problem, your orchid may need a grow light to rebloom.

After blooming, cut stem to base of plant.

Consistent watering is key to happy plants whether inside or outside. And Sunday is my day for watering all my houseplants and porch plants. I wasn’t sure how much to water my now dormant orchid. (Once they stop blooming, they enter into a dormancy phase.) I researched orchid watering needs and stumbled upon the idea of ice cube watering.

Once a week, I water my orchids with two ice cubes.

Simply place two regular-sized ice cubes on either side of the plant. (If your refrigerator makes small cubes, use four or five.) Repotting. This brings me to the topic of repotting. Repotting orchids is a tricky endeavor and isn’t something you’ll need to do very often. As you can probably see in the picture above, a few of my orchid’s roots have turned brown, and they have begun creeping from the pot. This is a sign that the plant is ready to be repotted.

After she finishes blooming, I plan to repot this orchid. I’ll share my method with you. Orchids like to be contained in small pots and they have very specific potting soil needs.

Fertilizing. Some gardeners regularly fertilize their orchids. I’ve never fertilized mine, but I may after repotting. More on this later. (See, I learn as I go.) 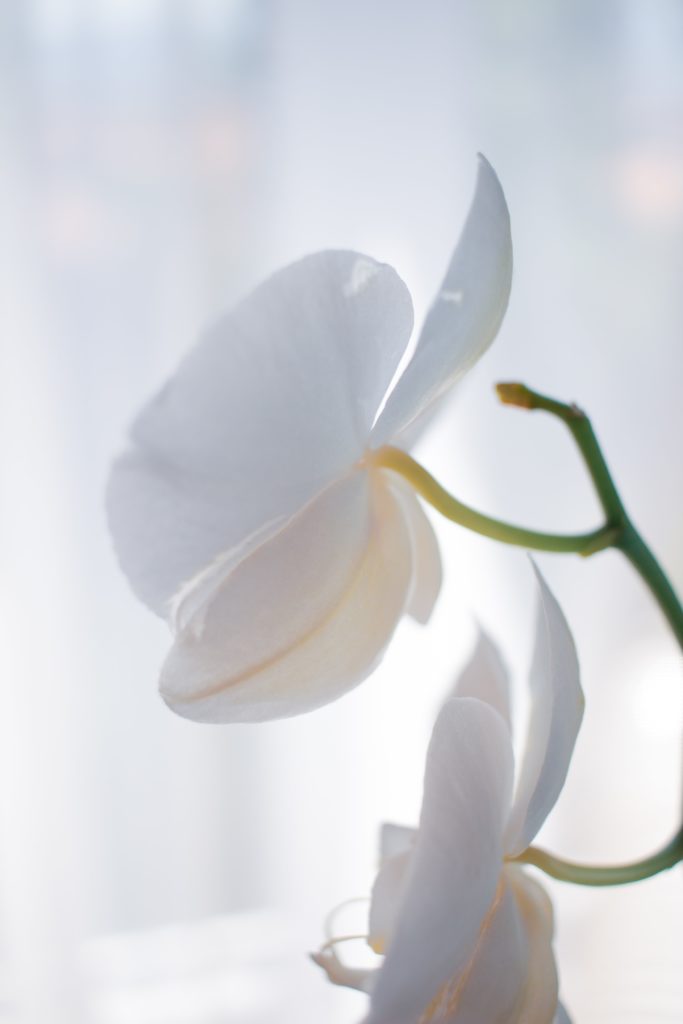 Provide bright yet indirect light and a temperature between 65-75 degrees.
Water with two ice cubes per week.
Orchids are much like children. They like safety and consistency, so don’t repot and water all willy-nilly. 😁

Don’t give up on your orchid when it isn’t showing off for you. Be patient and let it rest. Our currently blooming orchid began putting out buds six months ago. It’s a miraculous process well worth the wait. I have two orchids and both have rebloomed three years in a row.

What orchid growing tips do you have? Please share because we are always learning here.