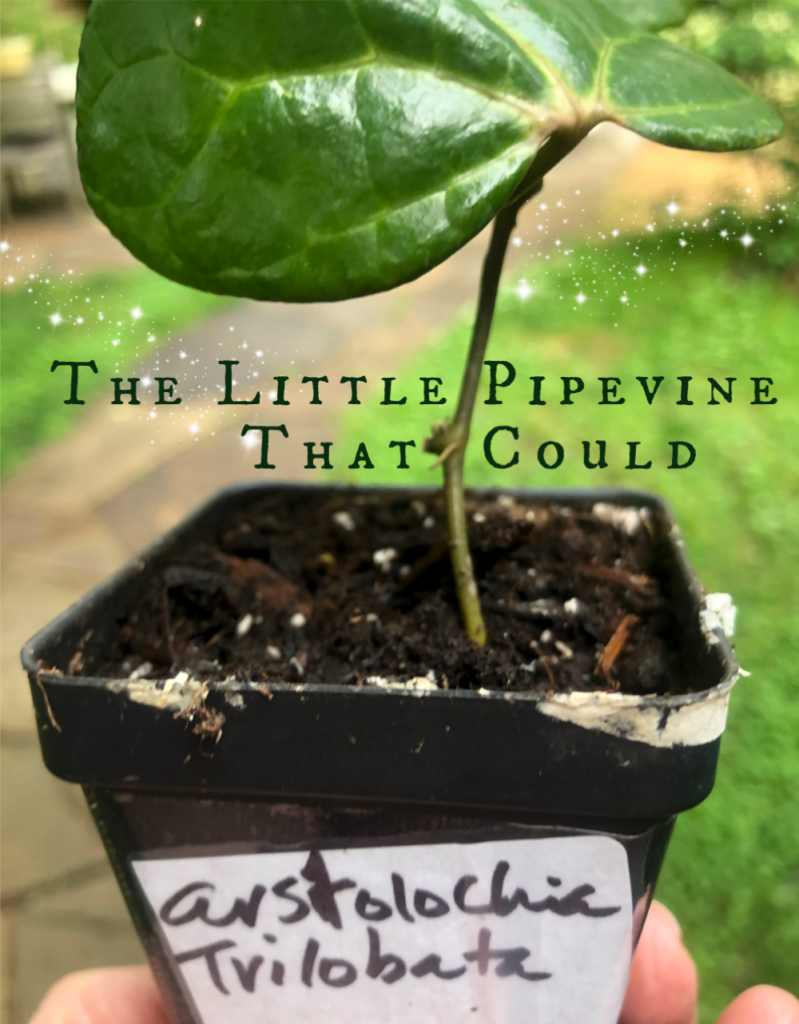 Two days ago, the best thing happened! The Little Pipevine That Could arrived on our doorstep.

I’d been looking EVERYWHERE to purchase a pipevine plant. Pipevine is the host plant for the Pipevine Swallowtail, and I want to add it to our butterfly garden. Unfortunately, pipevine plants are difficult to locate. This spring, they quickly sold out at all the regular garden places I visit (if they were there to begin with). The Botanical Garden of the Ozarks offered a few starters at its spring sale, but I was a few minutes late to the on-line party and missed out.

I found a single pipevine (Aristolochia trilobata) for sale on Etsy. It was my first time to order a plant from Etsy, but hey, this spring has been the time to do things differently. I placed an order on April 30. According to the well-rated and highly reviewed seller, PlantasticbyHuong, I would receive it in approximately three to five business days.

Look how unusual the blooms are: Ten stuck-at-home days later, I’d not received it. Poor little thirsty pipevine, I imagined her wrapped in newspaper, stifling hot and claustrophobic inside a cardboard box, lost at a mail station somewhere in the mid-South.

I emailed the seller to let him know I’d not received my order. A few days later, the seller refunded my money saying the plant was likely lost in transit and dead.

Emotions are running high these days, don’t you think? I mourned the loss of this little pipevine. After the hard work of germinating, sprouting a few leaves, and spreading its thread-like roots into soil, the baby pipevine met its demise in route between Florida and Arkansas.

It was my fault because I bought the pipevine during the time of coronavirus when mail delivery can be unreliable. (And evidently there are those who do not recognize plants as essential.)

I looked for a pipevine elsewhere, but never found a plant or seeds to purchase locally. My dream of a summer filled with pipevine caterpillars and butterflies was not to be. 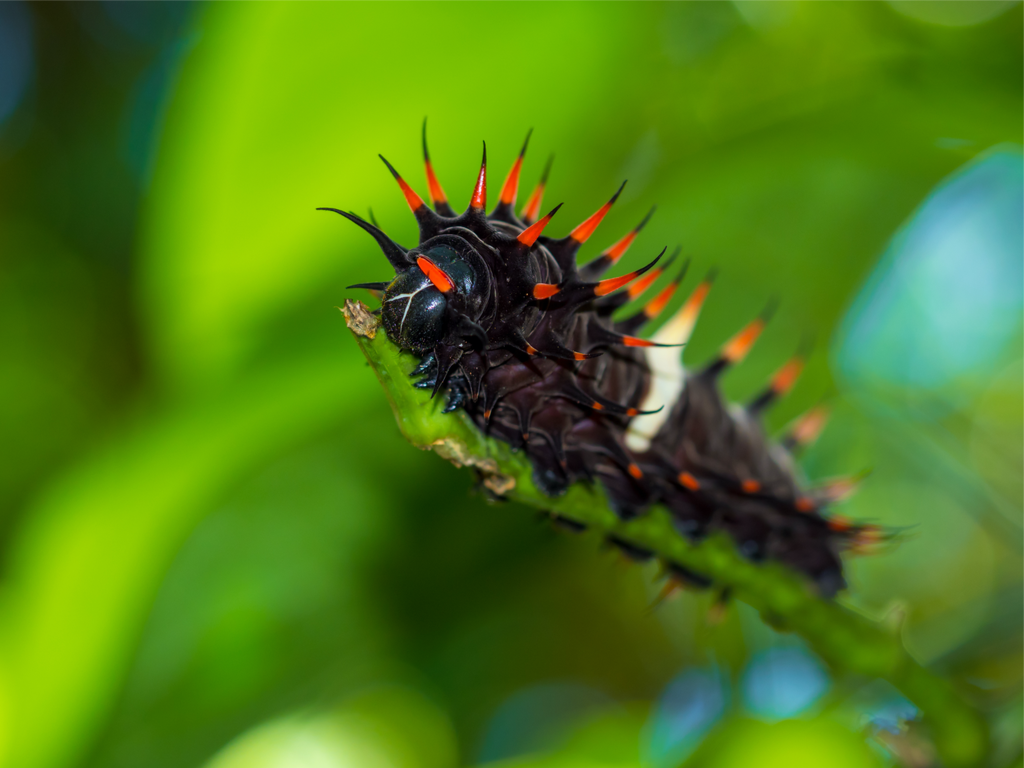 And then two days ago, on a cloudy, crummy, blah sort of afternoon, the doorbell rang. I went to the door, but found no one there—no delivery truck on the curb, no mail man in sight. On the doormat, a box marked fragile waited. Mail has become extra special during this time, so yes, I was excited to have a delivery even though I couldn’t remember having ordered anything.

The return address? I recognized the Etsy shop owner who had mailed the pipevine on the first day of May.

I dreaded to see the pitiful dried-up thing, but held out hope I might be able to soak it roots and rejuvenate it somehow. At least, I would give it a proper burial in the butterfly garden.

Sometimes magic comes when you least expect it.

When you most need it.

When I opened the box, a green leaf peeked up at me from deep inside the dark space. Green! It took me some time to free the pipevine; she was very well packed with tape and bubble wrap.

The seller had wrapped the plant’s plastic container in wet tissue, which managed to keep the soil damp for twenty-six days. The pipevine’s tiniest new growth had turned brown and shriveled, but the larger leaves, for the most part, looked green and glossy and healthy. I swear when I pulled her from the box, I heard her exhale with relief.

The Little Pipevine That Could survived her ordeal and is alive and well. Between thunderstorms, she spent some time in the fresh air getting familiar with her new home. Yesterday, she sat in the kitchen window, watching a soft rain fall. 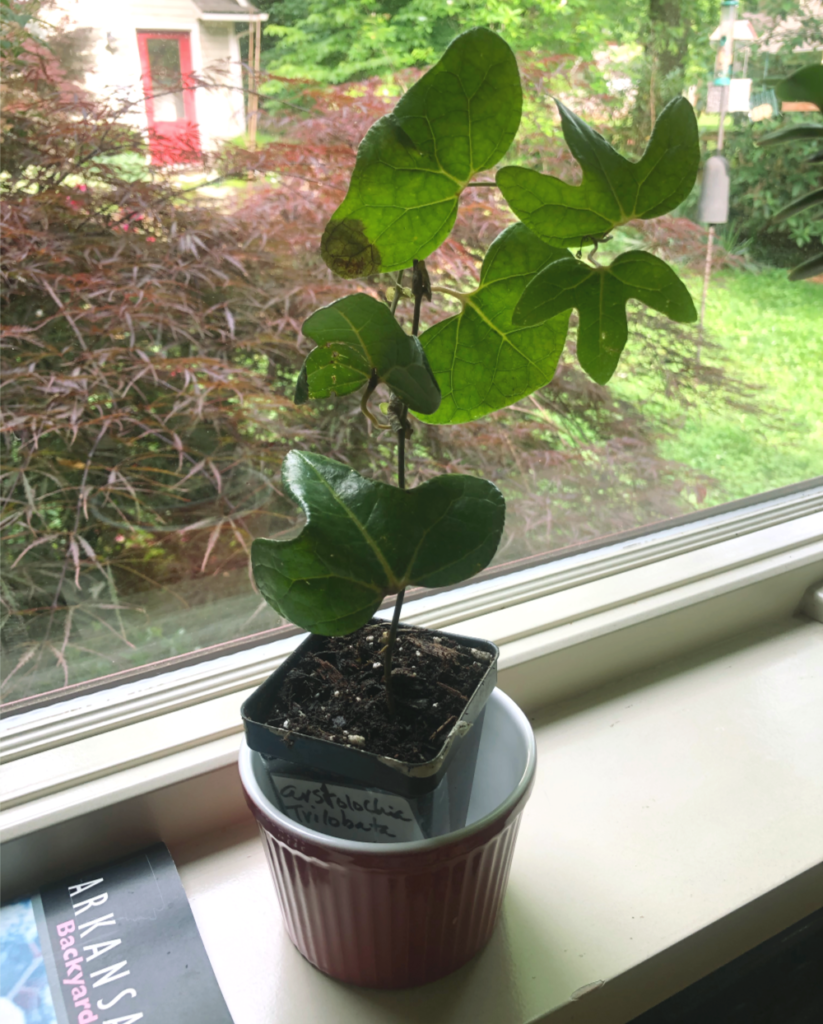 The pressure is on ME now, the pressure to plant her, nurture her, keep her alive. The Little Pipevine That Could is much more than a plant to me. She represents hope and possibility and perseverance during a time when things haven’t been possible, when life hasn’t always felt hopeful, when I’ve wanted to crumble rather than persist. When good seems to have gotten lost in the mail.

I’ve named her Piper. I plan to plant her today, maybe in backyard on the fence near a row of silky dogwoods. Or, maybe she’ll live beside the spicebushes where an old trellis needs a greater purpose.

Isn’t she a great reminder though? A reminder that hope and possible truly can appear on a cloudy day, sometimes materializing on our doorstep exactly when a little good is needed.

P.S. In the category of what a small world this is, after I wrote this blog post, I did some quick research on the classic children’s book The Little Engine That Could, which I remember Momma reading to me as a child (and later I read to my children). I had no idea the author’s name, but wouldn’t you know, his name was Watty Piper!

How crazy is that?

Watty Piper was Arnold Munk’s pen name. Munk was born in Hungary, moved with his parents to the United States when he was a child, and died in 1957 in Chicago.