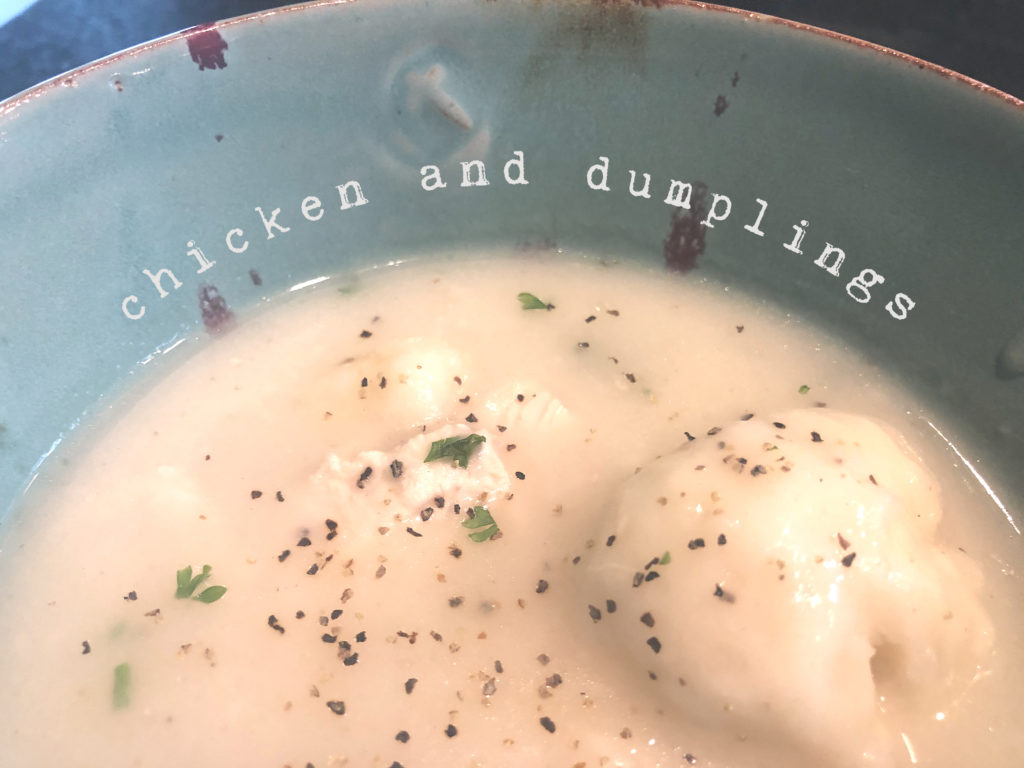 I can’t think of Mammaw Ruby (my grandmother on Daddy’s side) without thinking of chicken and dumplings. Hers were the best! She made a huge pot full for every family gathering.

While I don’t pretend mine are anywhere as good as hers, they are pretty dang delicious. Today I’m sharing my recipe (which is based on her recipe which came from the original Bisquick box).

Food plays a big role in my new book, Gene, Everywhere. Can food be a character? Maybe. Chicken and dumplings deserves a starring role, in my opinion.

It’s what I made on the first night Gene came to visit us. You see, I had this lovely notion that while Gene visited us (at my invitation), I would cook all the food, read all the books, still get all the work completed that was required of my loan officer job, but I would do said job at home, at a more relaxed and less stressful pace.

Later, toward the end of Gene’s visit, I made a different version of dumplings (the reason you’ll read about in the book.) This week I realized, I haven’t made them since.

A Chicken and Dumpling Tribute

With this week’s chilly weather and Gene, Everywhere coming out soon, I thought it was high time I made chicken and dumplings as a tribute to both Mammaw Ruby and Gene Boerner.

That’s a lot of pressure though. They both deserve only the richest, creamiest dumplings. 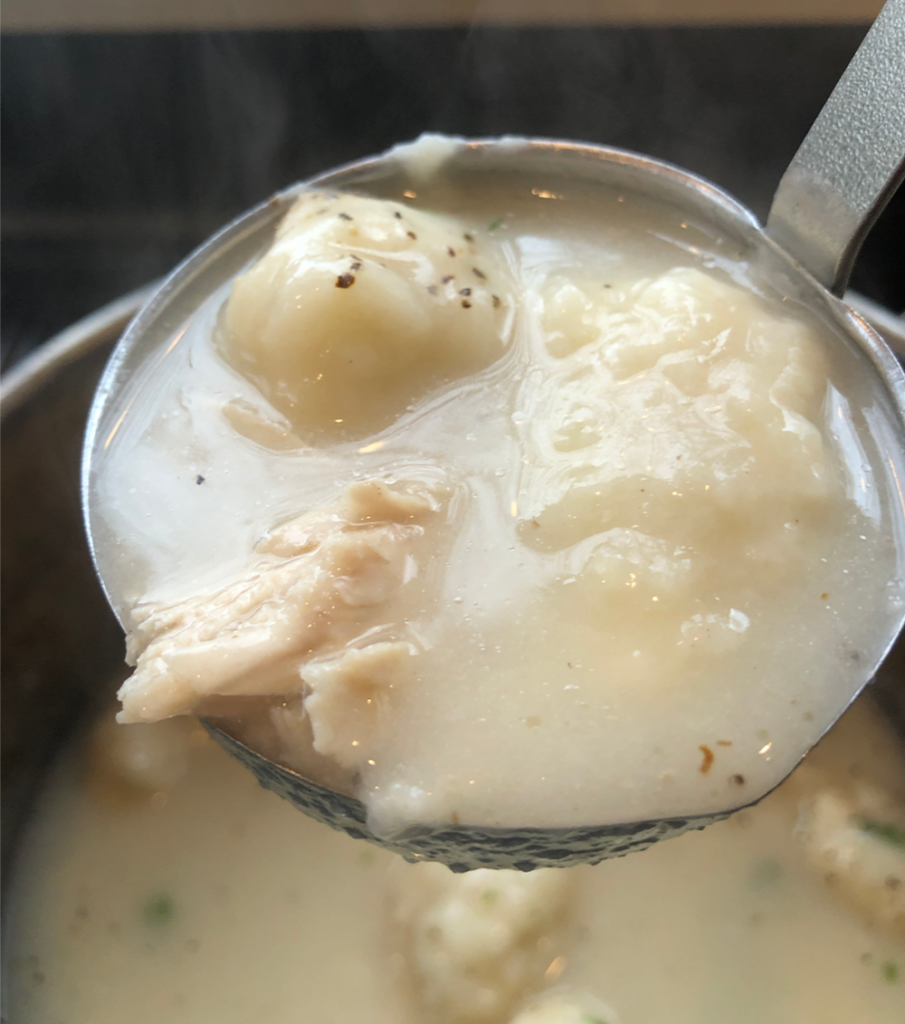 A Few Things to Note

When I was in college, Mammaw Ruby wrote me a letter and tried to explain her chicken and dumplings recipe. I still have the letter. Her instructions are general with no measurements because good home cooks back then just “knew” when the ingredients were right.

She fashioned her dumplings into a log and sliced them really thin before dropping them into the liquid. 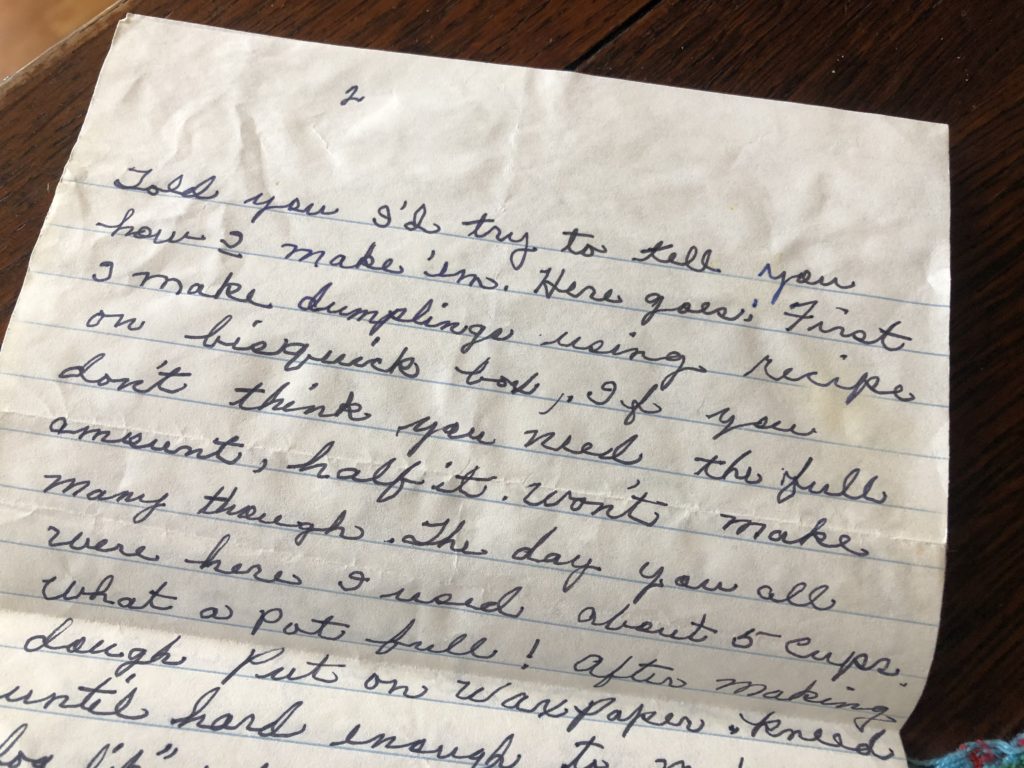 I like my dumplings to be fat and a tiny bit sticky inside. If you prefer thin dumplings, slice them like she did. 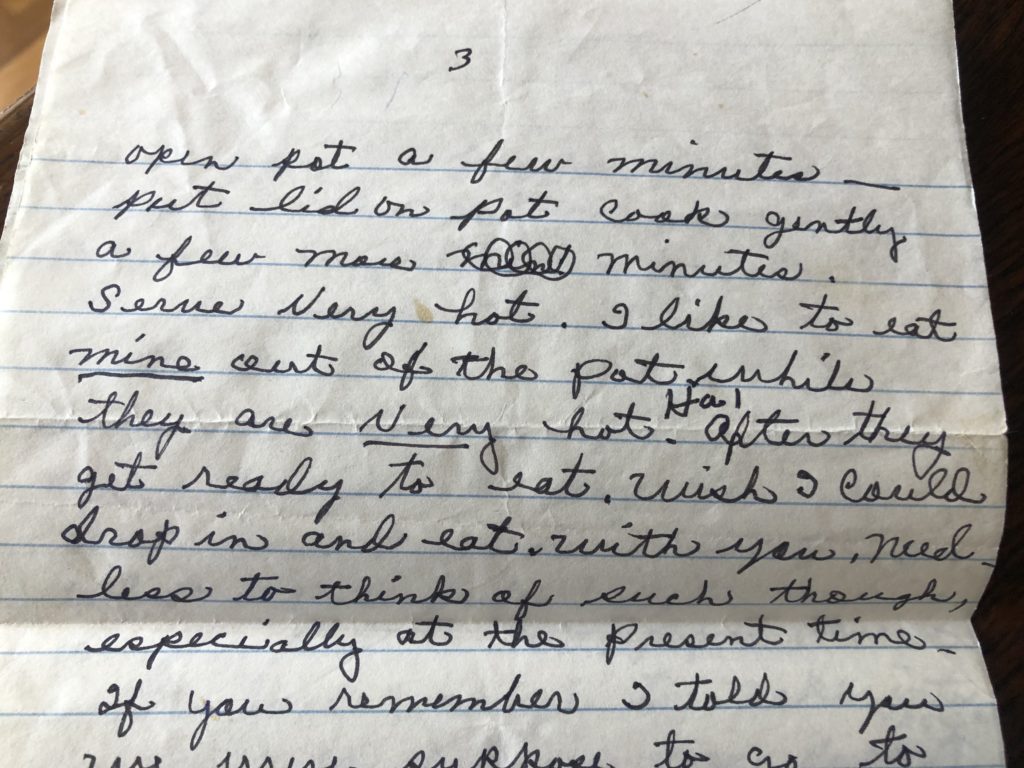 For her chicken and broth, Mammaw Ruby cooked a whole, cut-up chicken, and she did not remove the bones or skin. (The bones and skin add flavor, so don’t use skinless/boneless.) As a kid, I remember finding the occasional bone in my bowl… Or piece of skin. Since I don’t want to eat around those “extra” chicken parts, I remove the bones and skin before adding the dumplings.

Mammaw Ruby never sat at the table with us while we ate. (According to her letter, she liked to eat her dumplings out of the pot.) I remember how she circled and circled the table, ready to refill our dumpling bowls with the plop of her ladle. No one ever went hungry at her house.

This letter is the only thing I have in her handwriting. A good reminder to write letters, y’all. (And keep them.)