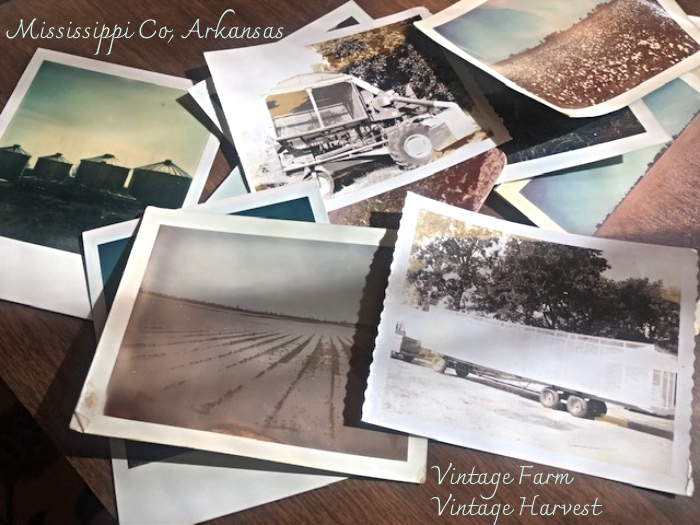 As farmers work another harvest, I thought it would be fun to share a few vintage harvest photos from our family farm. Something odd to me—none of these pictures are dated. There are no dates printed on the white borders by Kodak or scribbled on the back in Momma’s handwriting…

What’s up with that?

Based on the various photograph styles, I’m guessing these pictures span the early 1960s through the mid-1970s. Oh, weren’t those Polaroids the grooviest? Never again would we have to send a roll of film off and have to wait a whole looooong, exasperating week to see what we felt sure would be the best pictures EVER. How were we to know that for the most part the pictures would be horrid? Heads cut off, entire photos of undeveloped nothingness, strange splotches providing the only proof we needed to cement our growing belief in UFOs.

It really didn’t matter how awful they turned out.

After impatiently biding our time, Momma forked over Daddy’s hard-earned money, tucked the envelope in her purse, and carried them home (where they still live to this day), no matter how bad they turned out to be. Who could bear the thought of our memories ending up in a trashcan behind Star Pharmacy, or worse, in the city dump for anyone to find? Not us.

Yes, in the magically ridiculous 1970s, we could watch the image appear before our eyes. And waving the picture around and blowing on it helped speed the process.

These photos provide a clear reminder of how much farming and farm equipment has evolved in our lifetime.

This John Deere 99 cotton picker doesn’t have a cab. It’s missing a whole lot of the components and features found in today’s state of the art (expensive) picker. But I bet Papa Creecy was mighty proud to own it.

I believe this is a two-row picker. Again, I’m guessing. I know many people see cotton pickers and cotton trailers have nothing but horrible memories of their time spent in the fields. Those aren’t my memories. I spent many a fun afternoon playing in cotton trailers with my sister and cousin. I get nostalgic when I see the rare surviving trailer rusting behind a dilapidated barn. I feel a thrill when I hear about a cotton trailer that has been repurposed into a chicken coop!

The trailer in this picture? I feel certain it was painted silver. I remember Daddy and Papa Creecy had silver-painted trailers which I thought was farm-fancy. 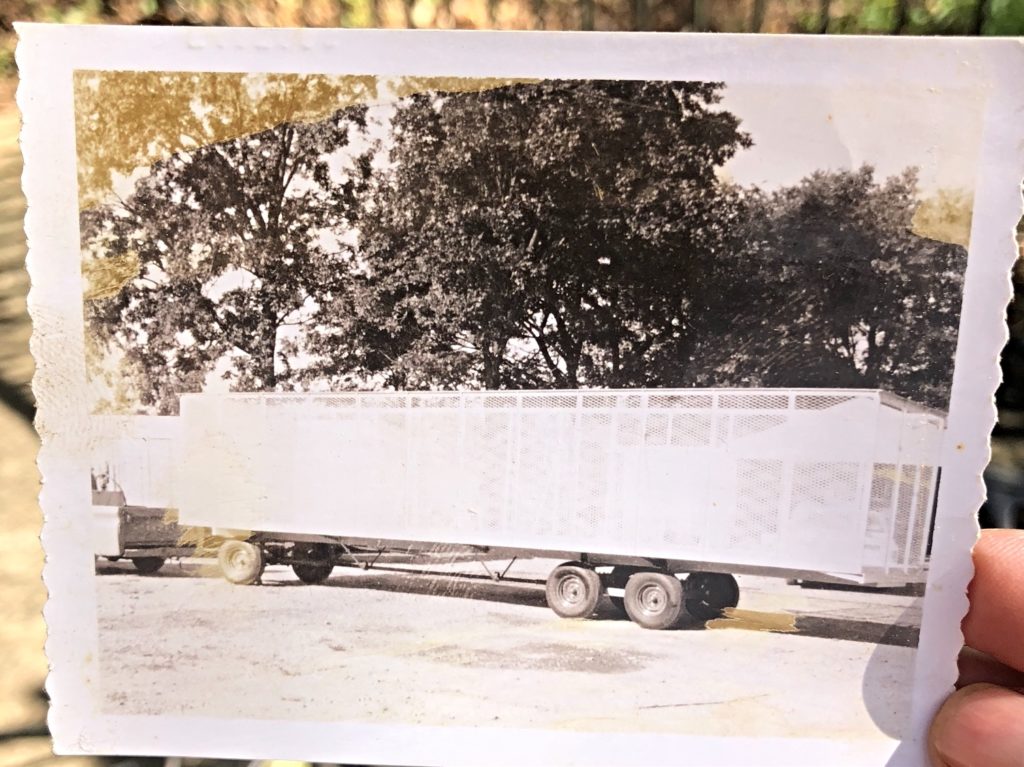 Soybeans galore. That’s Kochitzski Ditch (my favorite) in the treeline. Yes, I have a favorite ditch. 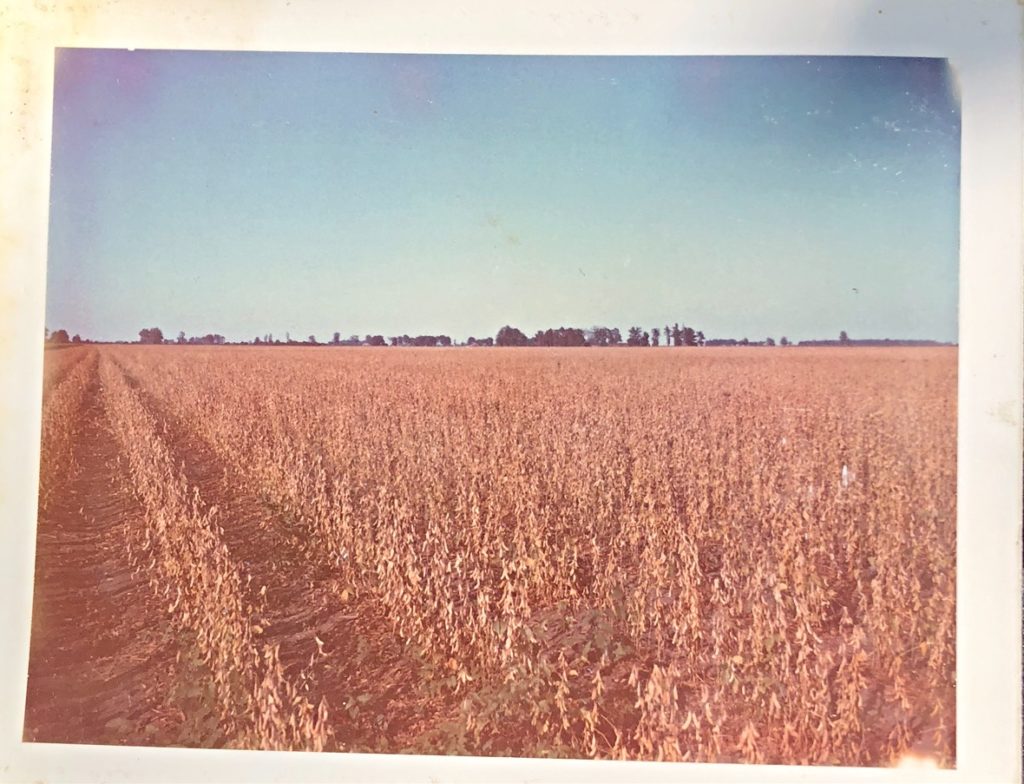 Even the Land Has Changed

These vintage harvest photos show how even the land has changed.

We thought it was flat back then. But now? Now, the land is precision-leveled and smooth as glass. With land-leveling, many of the shallow ditches have been flattened into the landscape, ditches that were once home to tadpoles and small turtles (which my sister and I may or may not have kidnapped and taken home to live in our bedroom). Those critters upsized to larger ditches and streams which are still plentiful in the area, so no worries there.

Land spread out so far and wide… Papa Creecy, the man and the legend. Here he is striking a pose (while straddling one of those shallow drainage ditches?). I think so. And last but not least, grain bins at the home place, preserved forever or until the Polaroid print fades completely away. 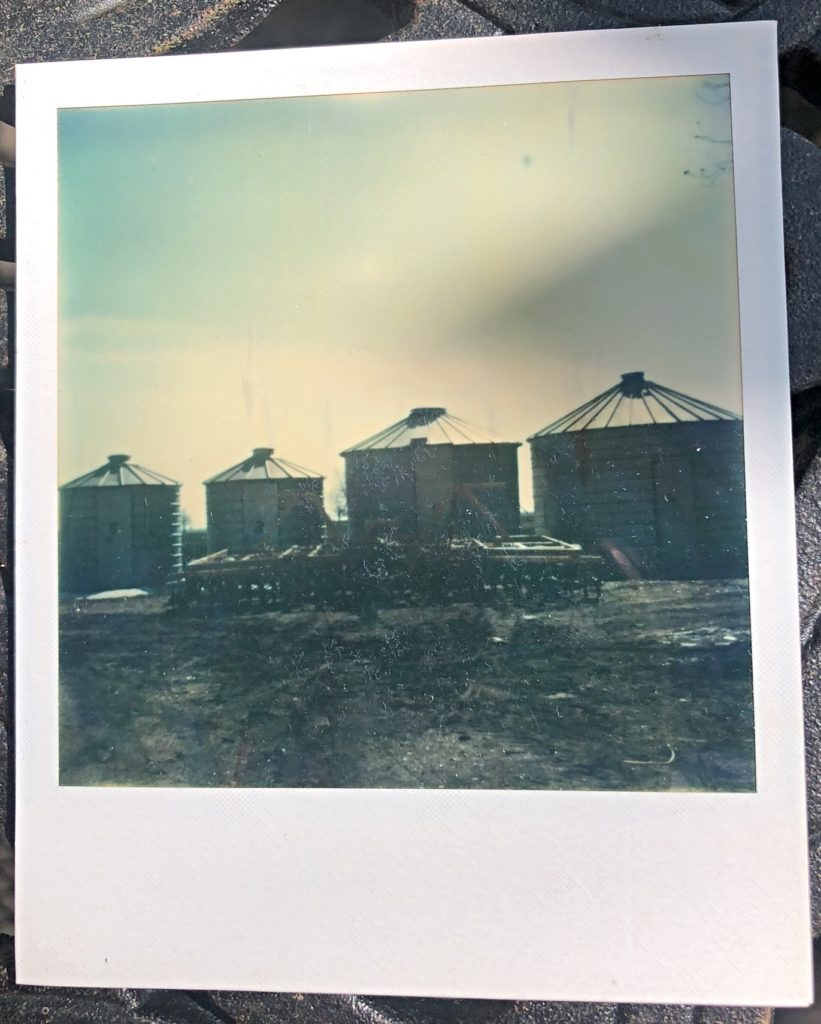 To my farmer friends, I hope this year’s harvest is productive, very uneventful, and the opposite of 2019’s wet planting and growing season. Be sure to snap some pictures so that sixty years from now, people can stand in awe of your vintage harvest photos.