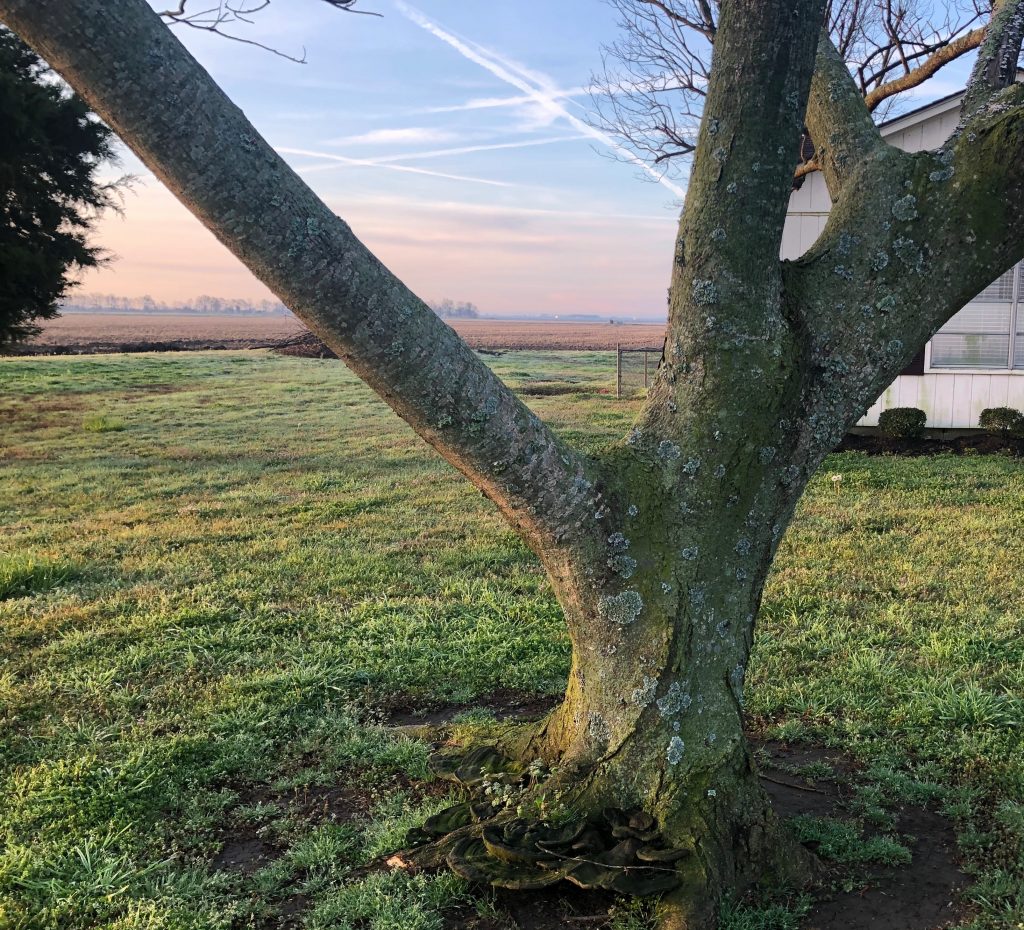 Oh how it hurts my heart to tell you that Gracie Lee’s favorite mimosa tree is dying. Fans of The Accidental Salvation of Gracie Lee probably realize if the tree is Gracie’s favorite, I love it as well. The mimosa tree I’m referencing is in the front yard of her (my) childhood home on the farm.

Sad. Sad. Sad. There are so many memories wrapped around the branches of this tree.

For both Gracie Lee and me.

Can a lifetime of memories suffocate a living thing? Mimosas are considered “trash trees” because they choke out native plants. In general, they aren’t long lived trees. They peak at fifteen years and decline thereafter.

But Gracie’s tree? Who can really determine the lifespan of a mimosa tree in Mississippi County, Arkansas? (I’ve long held that MissCo is not like other places, but that’s another post for another time…)

Our mimosa has been growing and thriving in the front yard for as long as I can remember. And that’s quite some time.

To every thing there is a season…

My childhood impressions were of her lacy, fern-like leaves and pink feathery blossoms smelling faintly of cotton candy and cucumbers, quirky in style as though dreamed up by Dr. Seuss himself. Miss Mimosa added a little whimsey to our flat delta land which was forever plowed and planted in straight row crops. Even though she didn’t have the strongest arms in the front yard, her limbs were sufficient to cradle two curious farm girls who often perched inside her branches watching the world drift slowly by.

And never to Abby and Gracie Lee.

When Staci and I tired of making mud pies, we collected her bean pods in an old bucket and pretended to cook supper with them, stirring them with a stick. She provided the most magical shade for tea parties, better than the plum tree, better than a clothesline tent made of wind-dried bed sheets. When sunlight filtered through her pink canopy, I swear pixie dust scattered all around us.

A time to plant; and a time to pluck up that which has been planted…

Maybe our mimosa has finally given up because no one has climbed her in such a long time. No tea parties. No using her trunk as home base.

Or maybe the entire reason she lived such an abnormally long life was because once Abby and Gracie (and Staci and I) grew out of the tree-climbing phase, she was truly allowed to flourish. And until recently, she has enjoyed the quietude of her golden years, touched only by rain, wind, pollen, the occasional bird that rests on her branches.

Momma and I recently discussed what to do. We decided that even though she may never bloom again, we aren’t going to cut her down. She still provides a home for lichen and fungi and a haven for birds and squirrels.

Who knows, maybe she’ll eventually collapse to the ground right where she’s lived her whole life. Seems fitting. Dust to dust and all. Please don’t lecture me about mimosas, how we shouldn’t grow them, and how I shouldn’t romanticize them on my blog. It’s not like I advocate buying or planting one. To those who say they are prone to insect and disease problems, I believe you.

Even so, I happen to love Gracie Lee’s tree. And maybe, just maybe, we actually had the one stellar mimosa in the land of mimosa trees. Yes, I will continue to have a soft spot for mimosas growing along the roadsides in the Ozarks. And that’s okay. Those soft spots keep us vulnerable, allow us to remember, make us human.