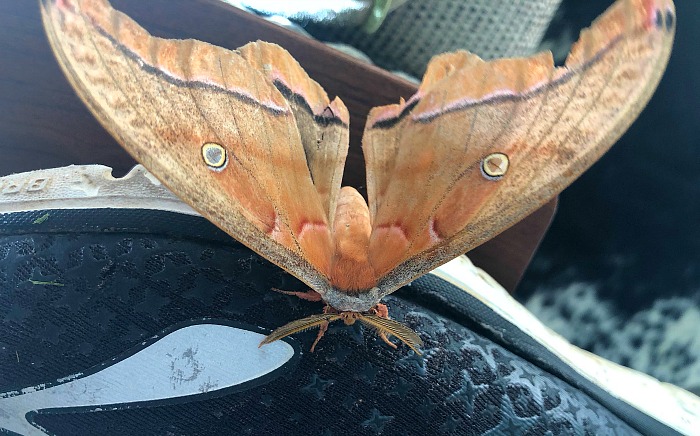 A few days ago, a sleepy little moth hitched a ride on John’s tennis shoe and came home with us after our morning walk. Actually, he wasn’t all that little. At first, he looked like a brittle brown leaf. Then, a butterfly? When I got a closer look, I knew he was a moth of some sort.

He clung there, exhausted.

We moved him onto the back of our wicker sofa on the porch. He fully spread his wings as though wanting to make sure we noticed his incredible markings.

So lethargic. I thought he was injured.

Immediately, as one does, I mentally prepared to care for him for the remainder of its life. Habitat. Food source. In a split second, these thoughts flashed through my mind.

We moved him to the lantana plant beside the back door because what moth wouldn’t prefer to be outside?

Next, I consulted the almighty Googler and learned ours is a Polyphemus moth belonging to the Saturniidae Family of giant silkworm and royal moths. This guy has a massive wingspan – about five inches – and large, feather-like antennae.

Note the eye-like spots on the wings. Smaller “eyes” on the forewings and large “eyes” on the hindwing deter predators. This particular moth is also known as a Cyclops Moth, named after the cyclops Polyphemus, son of Poseidon. Love me some Greek mythology… Here’s where the sad part of the story comes…

An adult moth only lives 5 to 6 days. After the caterpillar stage, the adult moth has only one goal—to mate during summer—and he has to be quick about it. Once he transforms from caterpillar to moth, he has no digestive system and never eats again. The process of starving is rapid. Our moth came to us at the end of his short life and brought wonder and beauty even in death. He never moved from his spot in the lantana.

Later, I gently picked him up and held him in my hand. Feather-light. Oh, so delicate, his wings fine as dust. Tiny picnic ants had already begun to claim him. I laid him back among the lantana leaves. He’s still there. A reminder of life’s beauty and fragility.

Days later, our interlude with the sleepy little moth still tugs on my heartstrings. Life is such a balancing act, fleeting and struggle-filled and braided around the beautiful bits. 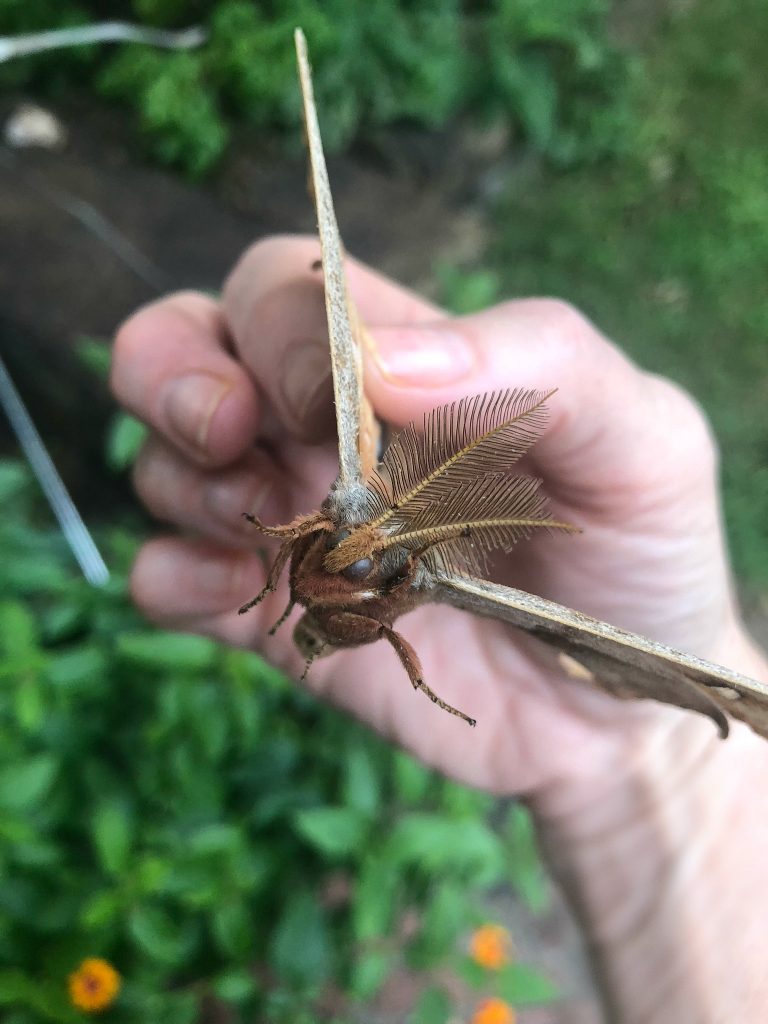 Enya cover – May It Be