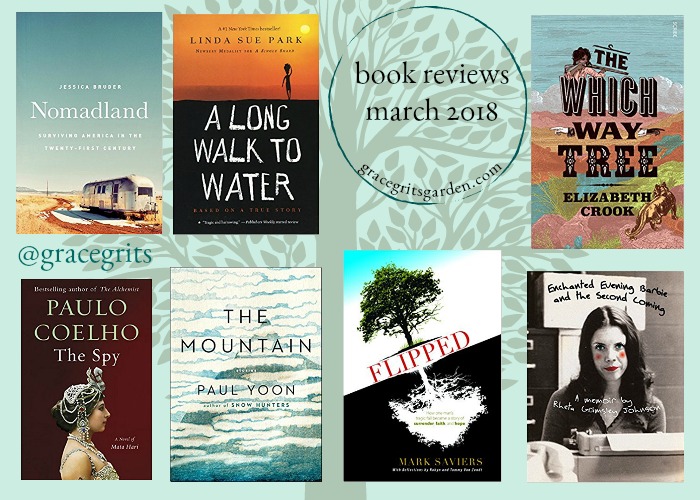 Sorry for the delay in posting my book reviews for March 2018. I don’t want to moan about the reason, so I won’t. Moaning would take away from the fabulousness of these books.

I’m always surprised when I go back and review the books I read during a particular month, because it seems no matter how different they may be in genre, setting, or plot line, I can typically find similar themes. For March, the theme of all seven books I read involved a journey for survival.  Interesting how that happens.

The Which Way Tree
By: Elizabeth Crook

Oh, sweet revenge. This enthralling Texas yarn stars a black panther and the 12-year-old girl who sets out to avenge her mother’s death. The story is told from brother, Benjamin’s, plainspoken point of view in a series of letters he writes to Judge Edward Carlton who’s investigating a lying, thieving, no-count Confederate soldier. Colorful characters abound. The wonderful storytelling and Texas setting provides a True Grit-ish feel.

This Book Made Me: excited to see the movie. Rights have been purchased by none other than Robert DuVall. Hell, yeah! (Thanks for the recommendation, DRM.)
Favorite Lines:
Preacher Dobb: “Vengeance belongs to the Lord, Samantha.”
Samantha: “Only if he beats me to it.”

Flipped: How One Man’s Tragic Fall
Became a Story of Surrender, Faith, and Hope
By: Mark Saviers

After an ice storm in 2009, Tommy Van Zandt fell from a ladder while cutting tree limbs in his back yard. The accident that nearly took his life left him a quadriplegic. Flipped is the story of Tommy’s survival and recovery written by his brother-in-law, Mark Saviers, with reflections from Tommy and (wife) Robyn. This honest, raw account flings opens the door to life turned upside down by catastrophic accident. Flipped is a story of deep faith and love and family/friends who step up in a big way. 100% of the proceeds from the sale of the book go to the Van Zandt Family Trust to help with the ongoing staggering expenses for Tommy’s care.

This Book Made Me: want to be a better person and wonder how I would react in a similar circumstance.
Favorite Line: Quitting was never an option. God never let that creep into my mind.

The Spy
By: Paulo Coelho

The Spy is the story of infamous femme fatale Mata Hari, possibly the world’s first feminist. Just before her death by firing squad in 1917, she pens a letter from jail to her attorney, thus setting the flashback structure of the story. At less than 200 pages (paperback version), the story is a quick read that feels like a fable. I always enjoy Coelho’s writing style filled with imagery, allegory, and references to nature (The Alchemist is my favorite!). This one left me wanting more. Coelho made Mata Hari seem like a clueless, accidental double agent.

This Book Made Me: want to read an in-depth biography of Mata Hari. I suspect there’s much more to know.
My favorite line: Men love to explain things, and they have opinions on everything.

A Long Walk to Water
by: Linda Sue Park

Told from alternating viewpoints, A Long Walk to Water is the powerful true story of two children and their struggles to survive in Sudan. In 2008, eleven-year-old Nya makes two journeys daily to fetch water for her family. In 1985, Salva, also eleven, becomes separated from his family and journeys as one of the Lost Boys of Sudan. While this book was written for middle schoolers, its message is for everyone. The two plotlines, both involving survival and something we take for granted—drinking water—expertly intersect at the end.

This book made me: grateful and hopeful.
Favorite Line: One step at a time, one day at a time, just today, just this day to get through.

The Mountain: Stories
By: Paul Yoon

I love a good short story. A great short story collection? Even better. In The Mountain, Paul Yoon accomplished something difficult. He created engaging characters in very few words. And, he connected wildly different settings—America, Spain, Russia, Shanghai, France—by showing the reader how everyone shares feelings of displacement. I appreciate his sparse writing style. My favorite in this collection is A Willow and the Moon. If you are a fan of short stories, add The Mountain to your to-read list.

This book made me: resurrect a short story buried on my computer.
Favorite Line: How did I get so full of holes and fail to notice all of the empty spaces?

Odds are good I’ll read anything with Barbie in the title. Odds increase further if Barbie is involved in a humorous southern memoir. This book checks both boxes, although Barbie doesn’t play a starring role, and sometimes humor is interwoven with sadness. Enchanted Evening Barbie is the story of long-time syndicated columnist, Rheta Grimsley Johnson’s, life as told in pithy essays. (At one time, she wrote for The Commercial Appeal in Memphis, so I’m sure we’re related.) The book spans childhood angst, college and early journalist years, love and marriage, divorce and death. Each chapter stands alone, so enjoy bits as pieces at your leisure or gulp down the whole thing in one spring afternoon.

This book made me: eager to read Poor Man’s Provence by the same author.
Favorite Lines: Pain is personal. When you rap your thumb with a hammer, nobody feels it but you. Nobody else cusses or cries. Grief is the same. The hammer hasn’t hit anyone but you. People will bring you a cold rag to wrap your finger and say they are sorry you are hurting, but the endless throbbing doesn’t go away when the sympathetic visitors do. It lasts. And lasts.

Nomadland introduced me to an entire subculture of which I knew nothing—a large community of post-retirement-aged Americans who live a transient lifestyle in vans, campers, and buses. No, retirement looks nothing like these folks envisioned when they enjoyed the benefits of working middle management corporate jobs. But after the recession, they found themselves unemployed and unemployable, yet unable to retire. Sounds dire, doesn’t it? Sometimes it is. But these hard-working golden girls and guys have reinvented themselves. After eliminating their biggest expense—their mortgages (either by choice or force), they hit the road, taking seasonal jobs as national park managers during summer, farm hands during fall, and Amazon workers during peak pre-holiday season. Employers couldn’t be happier with this “wheel estate” workforce, as these workers have genuine work ethics and fill minimum wage jobs others don’t want. Author, Jessica Bruder, spent several years researching these modern-day American nomads. For a time, to get a more authentic picture, she lived in a used van. Nomadland paints an intriguing yet sad picture of folks hanging by a shoestring. I found the glimpse into Amazon’s “CamperForce” eye-opening. And not in a good way.

This book made me: sympathetic and worried. I’ll never look at a Walmart parking lot the same way.
Favorite Lines: Bleary-eyed, they find places to pull off the road and rest. In Walmart parking lots. On quiet, suburban streets. At truck stops amid the lullaby of idling engines. Then in the early morning hours—before anyone notices—they’re back on the highway. Driving on, they’re secure in this knowledge. The last free place in America is a parking spot.

That’s it for my Book Reviews, March 2018. I hope I’ve piqued your interest in a few of these. Tell me what you’re reading today.

Musical Pairing:
The Rolling Stones, As Tears Go By