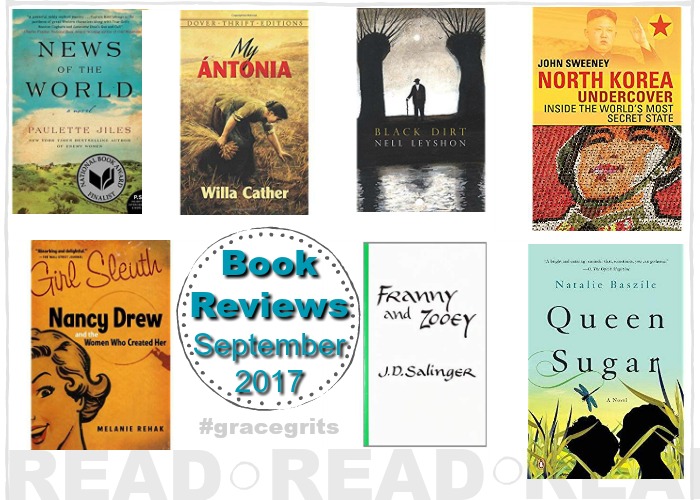 Happy October, friends! The books I read in September represented a variety of genres, settings, and themes. I lapped them up for completely different reasons. Grab a cup of coffee and journey with me to the plains of Nebraska, down south to Louisiana, and across Texas when it was wilder than it is today (joke). We’ll delve into the mastermind behind of Nancy Drew, visit with the quirky Glass family, and meet a dying man in England. And, if you dare, we’ll step foot inside North Korea, a place as foreign as a galaxy far, far away.

News of the World
by Paulette Jiles

Just after the Civil War, Captain Jefferson Kyle Kidd travels across war-torn Texas Territory on horseback bringing the news of the world by reading newspapers to those who drop a coin in his coffee can. A peaceful man, he refuses to read the local news because it only riles the townsfolk. Instead, he shares stories from Europe and other exotic places. In Wichita Falls, he reluctantly accepts a $50 gold piece in exchange for returning a young girl to her family outside of San Antonio. Thus begins Jiles’s historical fiction novel of journey and relationship. The characters are beautifully developed. Captain Kidd, a 72-year-old veteran, is compassionate, honest, and determined. Johanna is a savage child who, kidnapped by the Kiowa six years before, has been brought up by Indians. Throughout the hardship-riddled trip, Captain Kidd often regrets his promise to deliver her home. Their wild adventure across lawless Texas becomes one of bittersweet bonding.

This book made me: think about news, how it was distributed during the days of the Pony Express, and how now we can’t get away from it no matter how hard we try.
My favorite line: “Maybe life is just carrying news. Surviving to carry the news. Maybe we have just one message, and it is delivered to us when we are born and we are never sure what it says; it may have nothing to do with us personally but it must be carried by hand through a life, all the way, and at the end handed over, sealed.”

In July, I read The Colour of Milk by British author and playwright Nell Leyshon. Leyshon is quickly becoming one of my favorites. She writes lyrically with a certain sparseness. I appreciate how she creates a strong sense of place in so few words. A minimalist author. Is that a thing? Black Dirt is the story of one man’s childhood history told in a series of flashbacks from his sickbed/deathbed (which is also the room where he was born.) As morphine brings memories to the surface, each recollection adds tension. The story delves into his family’s history, deeper and deeper, much like digging into layers of rich farm land. This is a dark tale, one I may need to re-read to fully understand.

This book made me: want to push myself, made me want to write better, made me wonder if I have any business writing at all.
My favorite line: Frank looked at the window. The first light and the birds singing. Dawn coming. The sound of a tap from downstairs. So. There it was. None of it forgotten.

When Charley Bordelon inherits an 800-acre sugar cane farm from her deceased father, she uproots her eleven-year-old daughter, and they move from familiar sunny California to rural, steamy Louisiana. I was hooked right off by the farming theme. This fictional story, set in present day, touches on social themes such as mixed race relationships (Charley is African-American), as well as issues of estranged siblings and the challenges of being a single mother, and an outsider in a place steeped in male tradition. I especially appreciated learning about sugar cane farming.

This book made me: homesick for the farm. Also, I discovered after I read this book, OWN (Oprah) made Queen Sugar into a television series in 2016 (I had no idea). According to reviews, the television show differs from the book. I’ll probably watch it.
My favorite line: “It was like her father said: never make people glad twice-glad to see you come, and glad to see you go.”

Girl Sleuth: Nancy Drew and the Women Who Created Her
by Melanie Rehak

Girl Sleuth is a must read for those of us who grew up devouring Nancy Drew books like Pop Rocks. In the seventies, what girl didn’t want to be plucky Nancy Drew? I certainly did. Those books stirred my imagination and made me view the most common objects—an old clock, a staircase, the dusty attic—as a mystery waiting to be cracked. Somewhere in the back of my mind, I knew that Carolyn Keene was a pen name. A mystery within a mystery! This book delves into the man (and later his daughters) who created Nancy Drew, along with The Hardy Boys, The Boxcar Children, and more. As a writer myself, I found the details of how the stories were written—outlines doled out to writers—fascinating.

This book made me: think about the timelessness of Nancy Drew (over 80 million books sold). Even though writing styles and dialog have changed with the times, the traits we love about this spunky sleuth—her smarts, independence, and curiosity—will never go out of fashion. At least I hope not.
My favorite line: “Grab your magnifying glass, because this is a mystery story.”

My Antonia
by Willa Cather

I have never read Willa Cather, and I’m glad I waited. I doubt as a younger person I would have appreciated this story. Now in my somewhat wiser, older age? I find descriptions of the lonesome prairie, the hardworking folks, the sense of loss, all of it, incredibly real and gorgeous and haunting. This book provides a glimpse into the life of immigrants who built this country. Cather’s writing is hypnotic. (I listened to the Audible version and the reader’s voice was hypnotic, too.) Antonia is a wild Bohemian girl who gets under Jim Burden’s skin and becomes a powerful part of him much like the land itself.

This book made me: once again, think about all the amazing literature I’ve yet to read.
My favorite line: “There seemed to be nothing to see; no fences, no creeks or trees, no hills or fields. If there was a road, I could not make it out in the faint starlight. There was nothing but land: not a country at all, but the material out of which countries are made.”

I read Franny and Zooey a long, long time ago and remember thinking it was okay but nothing earth shattering. I re-read it last week for a class I’m taking. This time, the lack of earth shattering plot made it all the more engaging to me proving stories change as we change. The Glass family includes a large number of children who at one time were young radio stars. Now, as young adults, they seem unable to make it in the real world. Franny Glass reminds me of a female version of Holden Cauldfield. Tired of college phoniness and the egos surrounding her, Franny has become somewhat obsessed with the idea of praying without ceasing and is in all likelihood having a breakdown of sorts. The story includes humor, thought-provoking subtext on relationships, and an interesting commentary on family dynamic. Note: Franny was written as a short story and Zooey as a novella. Both were  originally published in The New Yorker and later sold together as a novel. Salinger went on to write more stories about Franny and Zooey (siblings), which now I must read.

This book made me: want to dissect every sentence of dialog because really, it is brilliant.
My favorite line: “Against my better judgment I feel certain that somewhere very near here—the first house down the road, maybe—there’s a good poet dying, but also somewhere very near here somebody’s having a hilarious pint of pus taken from her lovely young body, and I can’t be running back and forth forever between grief and high delight.”

North Korea Undercover: Inside the World’s Most Secret State
by John Sweeney

Given what’s going on in our world today, we should all educate ourselves on the world’s most secret state. North Korea Undercover would be a timely read for Halloween, only this is real life, and Kim Jong Un’s vileness should not be underestimated. Part exposé, part travelogue, the author writes of his time in North Korea posing as a history professor. He mixes his observations with other first-hand accounts of those once inside who lived to tell about it. Bottom line… the people of North Korea are starving, brainwashed, and not allowed to leave without risk of dire consequences to family members. Disabled adults are nonexistent and likely exterminated as babies. With no news, no internet, no life outside worshiping Kim Jong Un and dead tyrants (who even in death are treated better than regular citizens), North Koreans know no other way. Anyone briefly allowed inside is shown a carefully curated and extremely eerie world.  Farms have no animals, hospitals have with no patients, schools have no students. Sweeney’s book, while dry at times, provides a terrifying look at the country and madman “we” have engaged in a twitter war. And I’ll say no more. Big Brother, you know.

This book made me: horrified. If you are reading this, stop right now and thank your lucky stars you weren’t born in North Korea.
My favorite line: “Power magnifies faults. Or as the old Swahili proverbs has it, the higher the monkey climbs the tree, the more you can see his bottom. Mood changes, whims, paranoid insecurity, and absolute power are a bad mix.”

That’s a wrap for September. What’s on your to-read list?