We’ve come to the last part of our Iceland journey! The past two days we’ve been driving the ring road through the East Fjords to South Iceland and back to Reykjavik where we started. Whew.

If you’ve followed along for the past two weeks, I hope you’ve enjoyed the adventure. My pictures in no way do adequate justice to Iceland. It’s impossible to capture the scale and magnitude or the serene beauty of it all. But here I go anyway, sharing a few pictures I took while driving from the East Fjords to South Iceland and wishing I had a real camera instead of an iPhone.

We did this drive in parts of two days. That’s how we planned it so that we could take our time and enjoy the scenery. The total distance of this route on the ring road is approximately 650 km. (Not that there’s a shorter route by land because there isn’t.) One thing we’ve learned about Iceland, driving takes longer than we expected. While traffic doesn’t exist, weather conditions change rapidly. Most bridges and tunnels are one lane. Certain stretches of the highway turn to gravel with no warning or reason. Reindeer and goats cross the roads at their own speed. And then…of course…how many times will you pull to the road to take pictures and visit the sites?

And let me just say, if I’d been driving, I’d still be somewhere on the coast taking pictures. Probably.

I am posting these pictures in the order I took them. You can see how quickly the topography and weather changes, often in only a few minutes or miles. One more thing—this route isn’t open in winter. And even in summer the area is known for ash and sand storms, so check driving conditions before setting out.

East Fjords to Southeastern Coast (from Seyðisfjörður to Jökulsárlón)

“Nothing to see here,” Momma sheep says. I beg to differ. 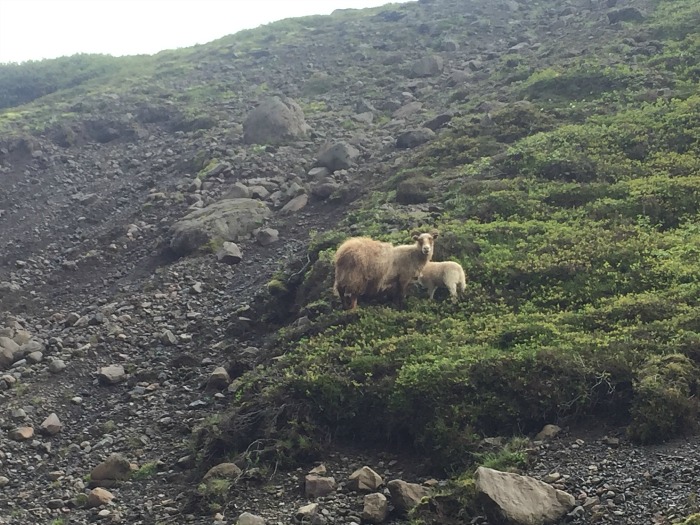 I failed to get the name of this hiking spot but the fog had cleared and the rain had softened to drizzle. Black sand beaches all around. THIS stop at Glacier Lagoon, literally one minute off the main highway, was phenomenal. We did a boat tour in and around the icebergs. The lagoon is naturally formed from glacier melt, and yes, sadly the lagoon is growing larger as the planet continues to warm. The ancient water takes on a blue hue from light reflection and refraction. This uncommon setting has been the scene of several movies including two James Bond movies—Die Another Day and A View to a Kill, as well as Lara Croft Tomb Raider. Interstellar and Batman Begins were filmed nearby, too. Truly incredible to see. Where the Skeidarársandur glacier meets sand. This roadside stop, which looks like modern art, is what remains of a portion of the bridge that was washed away in 1996 after massive glacial flooding followed eruption of a volcano in the Vatnajökull glacier (Europe’s largest glacier). This was and still is the only road connecting this area of Iceland with the remainder of the country. Without the bridge, transportation was disrupted for over a year. (Until now, I’m pretty sure I thought volcanos and glaciers were mutually exclusive in nature which is probably not something I should mention.) Just when you think you’ve seen all the oddness Iceland has to offer, we came upon a field of…what? Cairns? According to history, a farm at Laufskalar was destroyed in 894 when volcano Katla erupted. Later, folks began placing rocks on the site as sort of a remembrance to the farmer. Of course, I added one, too. There are over 200 man-made caves in South Iceland. This one, known as Rutshellir, is 20 meters long and once stored hay. Many of the caves are now protected sites. Since I am lured to both caves and turf roofs, this place called out to me. John turned the car around so I could take a picture. He’s nice that way. That’s it for now! See you back home soon.