It isn’t every day a girl gets the opportunity to cross the Arctic Circle. But when I find myself in North Iceland, only 25 nautical miles from the Arctic Circle, I can’t pass up the chance. So I booked passage on the ferry out of Dalvik, and John and I made the three hour voyage to Grímsey Island.

(I know what you’re thinking. ?A three hour tour…?)

The Arctic Circle straddles teeny tiny Grímsey Island on the northernmost side. Teeny tiny as in land area of two square miles and a maximum elevation of 344 feet. Seriously, the ratio of real estate to spectacular scenery is off the charts magnificent.

The ferry ride was stomach-plunging bumpy. This is a working ferry that transports loads of fish, so no, not luxurious, but comfortable enough with bathrooms and Tom & Jerry cartoons playing on the television. I’d hoped to spot a whale, but we left in dense fog and saw nothing of the gorgeous shoreline leaving mainland Iceland. The small harbor on the island appeared out of the fog the instant we arrived and not a heartbeat sooner.

Grímsey Island is home to 65 humans, Iceland’s largest population of Puffins, and an impressive variety of birds not found any other place on planet Earth. I thought WE had traveled a great distance to get to the island, but the Arctic Tern found in abundance on Grimsey migrates pole to pole each spring from Antarctic! 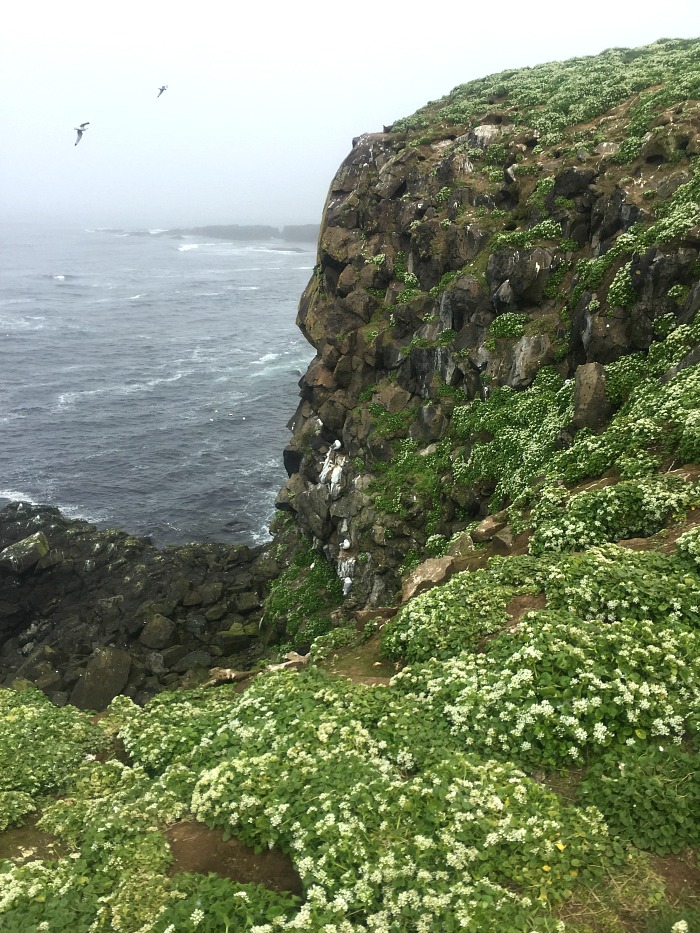 Interesting fact: Because of the incredible bird population, dogs and cats are not allowed on the island. Period. For pets, kids keep a chicken, goose, or duck. Just a few yards from the formations, remains of what must have been a turf house? On the southeast corner of the island (only steps from the southwest corner), a bright orange lighthouse (built in 1937) guides fishermen and boat traffic into the small harbor. The people of North Iceland and particularly Grimsey Island are oblivious to the clock and the calendar. According to our tour guide, Hella, folks are aware of the time school starts and ends and when the ferry arrives, otherwise, time is determined completely by the weather.

The island offers one diner with a fabulous beer cheese soup, a small airport with one daily flight that may or may not arrive, an indoor swimming pool, and a school that serves up to middle school students. By age fourteen, kids must leave home to finish, sort of a boarding school life. The doctor visits every two weeks, otherwise, in an emergency, the island depends on the daily airplane and coast guard rescue. There’s a guest house on the island and a 3-hole golf course (with plans to expand). You can actually hit the ball across the Arctic Circle!

Loneliest hole of golf ever? 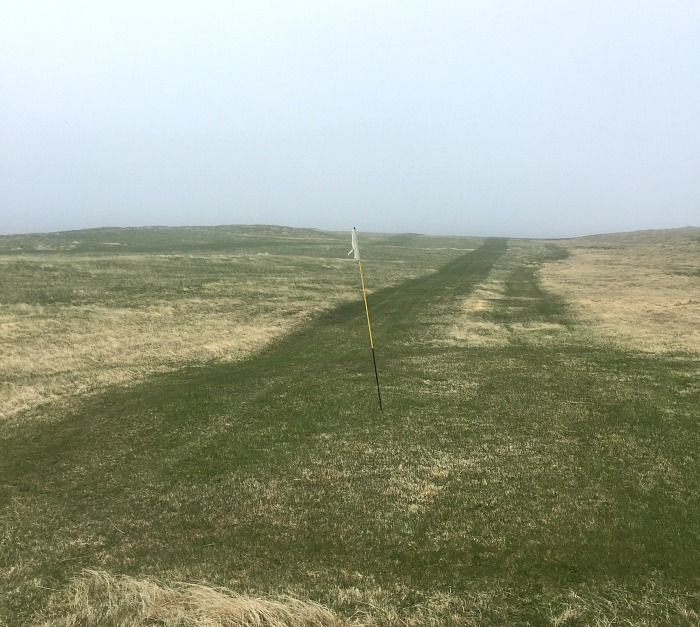 In 1878, Daniel Willard Fiske (1831-1904), a professor at Cornell University, circumnavigated the island and became captivated by the place and people. Although he never stepped foot on the island, he struck up a friendship with two islanders via penpal correspondence. Fiske discovered the people of Grimsey were skilled chess players. In 1901, he presented Grimsey Island with a large library and gifted every household a chess set. At the bay, a monument honors Fiske. His birthday, November 11, is known as Fiske Festival, a day of celebration. 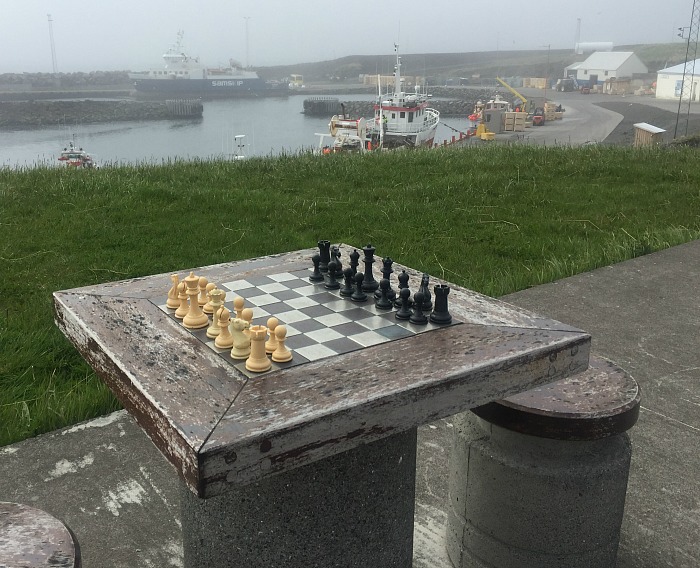 The church on the outskirts of town was constructed primarily from driftwood in 1867 and improved in 1932. The altar painting, based on Leonardo da Vinci’s mural The Last Supper, was created by a local artist in 1878. Services are held approximately four times a year by a visiting vicar. 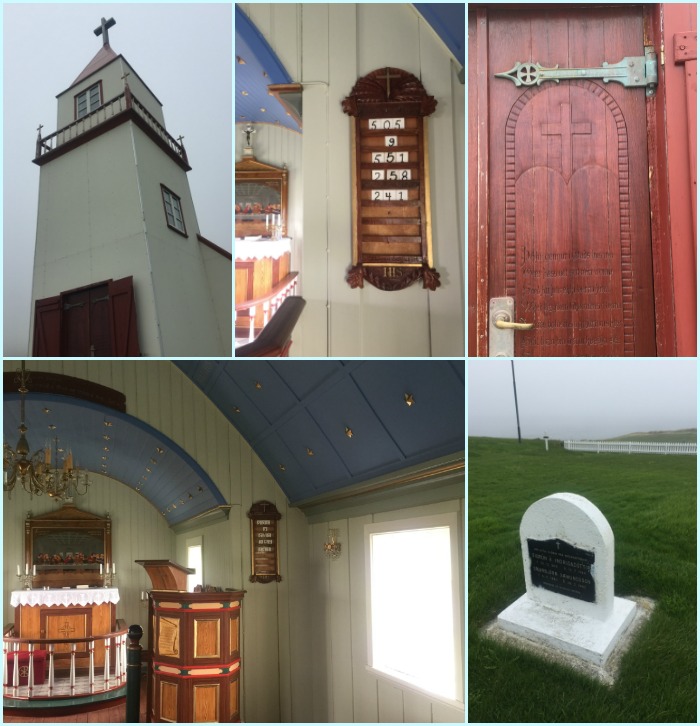 We officially crossed the Arctic Circle on the north end of the island. Yes, I took a copy of my book, The Accidental Salvation of Gracie Lee. So many of my readers have been kind enough to send me fabulous pictures of Gracie Lee on vacation, so I couldn’t not do it too. Plus, May is “Get Caught Reading Month” so technically we’re supposed to take pictures of books in all sorts of places. It’s true.

Before we boarded the ferry back for the mainland, I donated a copy of my book to the Grimley Island library. Maybe someone on the island will read it and be curious about visiting the Arkansas Delta and its people, farmers who also live and die by the weather? And they’ll think, “Who are these strange people who grow cotton and eat cheese dip?” 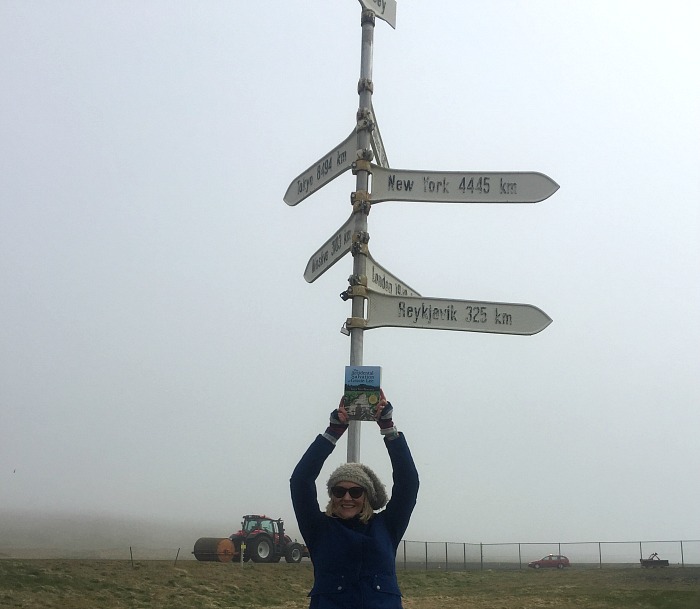 And guess what? After one crosses the Arctic Circle, one gets to drink hot chocolate and eat waffles with rhubarb jam and cream. Just fyi. I came to Iceland under the pretense of writing (?) and even if I don’t write a solitary word, it’s invaluable to explore the unusual and awaken to the truth of how different and varied other cracks and crevices on this planet really are. We get so wrapped up in what we think and believe, those things we get in a tizzy about. But Lordy, we are so insignificant. So small. This truth is only a plane ride away.

P.S. The ferry ride back to the mainland was much smoother and the weather clearer. This trip has definitely been a highlight so far and something I highly recommend if you visit North Iceland. Arctic Sea Tours can hook you up with this as well as whale watching tours. Forgive the mess of this post. I wrote it super quick!