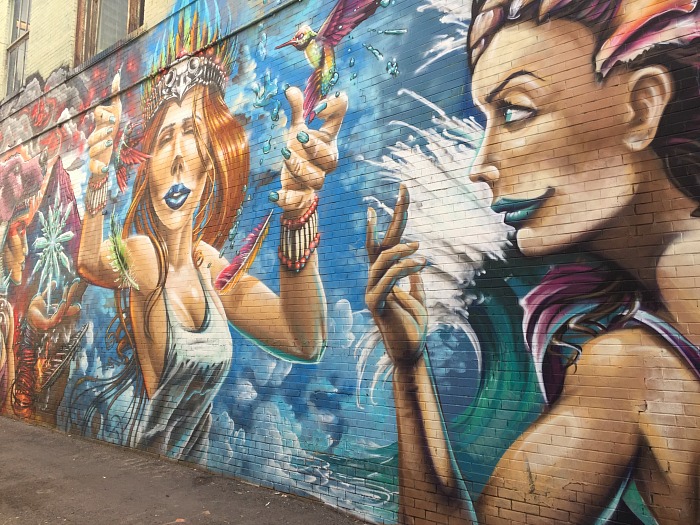 I spent an entire day last week walking around taking pictures of Denver street art. There’s so, so much! The beautiful day felt as though I’d downloaded it from a weather app, fairytale perfect—I was extremely fortunate in that regard. Denver. January. It could have been way different.

Street art is technically defined as “art developed in public places”. I consider street art as anything that stops me, draws my eye, makes me take a second look. In a good or interesting way, of course.

Something to note: Denver street art has been a real thing for decades. There are entire pockets of the city devoted to it. In the summer, Denver hosts a Chalk Art Festival. Each September, the Crush Street Art Festival showcases and celebrates a series of remarkable murals. The city even has its own society of crocheting street artists commissioned from time to time to crochet bomb large installations. This massive granite sculpture (above) greets folks who visit City Hall. In ancient Roman religion and myth, Janus was the god of transition. Beginnings and endings. He was typically depicted with two heads, looking from the past to the future and presiding over war and peace. The carrot in the center? I’m guessing it represents ideas and success. The City Hall building (just behind the “head”) is inscribed—”What is the city but the people?” Exactly. I’ll admit, I’d never heard of Clyfford Still, but when this gigantic message greeted me just outside my hotel, I took it as a literal sign to study up. Still was one of the first post-WWII abstract expressionists. He bucked the system with his unusual artistic style, painted prolifically until his death, and his work existed in near obscurity. His art spoke to human condition, and he influenced many of the more well known artists such as Jackson Pollock. I saw several mammoth murals brightening otherwise nondescript alleyways off 16th Street Mall. The scope and scale and detail is unbelievable. The artist @zehb_1 can be found on Instagram. (This artist also did the first picture at the top of this post.) And fyi, 16th Street Mall was designed by I. M. Pei. This life-sized sculpture just outside Denver Museum of Art is based on Chinese artist Zhang Huan’s first performance after moving to New York City in 1998. At a contemporary art museum in Queens, Zhang lay face down naked on a block of ice for ten minutes. This performance depicted his fear of moving to New York and served not only as an endurance test ( ice on naked skin = pain), but also a sort of existential meditation. I stopped and spoke to Ty, the artist who designed and created this incredible chalk art. He was just finishing up when I happened along. My picture is more about the chalk, but oh well. I like it. Chalk is my style. As To Be in Plain Sight, Denver Museum of Art

I took a picture of these words having no idea if this was supposed to be “art” or not. Then I read As To Be in Plain Sight was originally part of the Embrace! exhibit. Later, this installation was moved to an outside wall of the Denver Museum of Art so everyone can view it. While this may only seem like words, words can be art. That’s the point of this I suppose—how each person interprets the phrase bringing in his or her own associations. I do like the way the fire hydrant and the lone person stand out in my photo. I don’t think they would without the words on the building. Wheel consists of ten red, forked “trees” made of porcelain enameled panels on steel frames. Each tree is 12 feet high and positioned on a 50-foot diameter circle. This installation is aligned to the summer solstice sunrise which means if you stand at Tree 6 on June 21, the sun will rise between Tree 1 and 10. Each tree represents different history of the Indian peoples. Speaking of being in plain sight, I was in awe of this mural above created by Denver graphic design company, Inkmonstr.  To appreciate the scope, check out the picture below, too. Denver is devoted to its art scene.

These photos represent only a small portion of the creative craft I saw. As I strolled around (I walked over fifteen miles in 3 days), I began thinking about how we should explore our own cities more. Street art (in some form) exists in Dallas, Fayetteville, Atlanta, wherever. We don’t have to officially be on vacation to take in the sights.

I challenge you to find art where you live, in the architecture of old buildings, on Main Street, in nature even. It’s what I plan to do. And of course, I’ll share it with you. “Art is not what you see, but what you make others see.”
― Edgar Degas