That’s the day to treasure hunt for lost Halloween items. And if you still crave chocolate, you can find plenty on porch stoops and along the sidewalks. Like an Easter egg hunt without the eggs. And without Easter. But I’m getting ahead of myself…

The day after any celebration or big event is often followed by a certain feeling, en emptiness mixed with relief. This is true of Halloween, too, at least in our neighborhood where most everyone gets in on the fun with entire families dressing in costume to escort kids around the block. Jack-o-lanterns perch on front porches. The local grocery store sells out of candy.

The morning after, as Lucy, Annabelle and I went for our first walk of the day, the street had a vacant feel to it. The wind blew leaves around, along with the occasional candy wrapper. And we found plenty of unopened candy, too. I was reminded of that scene from the movie Big when Josh returns to the site of the previous night’s carnival. The night before had been filled with lights, music, laughter, food, rides. But the morning after, the carnival had eerily vanished. The wind blew. Leftover trash remained as the only sign of what had been.

That’s how the morning after felt in our neighborhood, too.

On Halloween, I gave out 1,000 pieces of candy (for the most part, one piece at a time to make it last). For three solid hours, Lucy and Annabelle barked from the front window. Three solid hours. The morning after, we were tired. The neighborhood felt tired as well, relieved to be done for another year.

But unlike the movie Big, we began to find lots of Halloween evidence. I took pictures, as I do. And it became a game. What would we find?

Here’s what we discovered during our morning after walk (presented to you unmoved, just as we found them). 3. LITTLE TYKES WITCH. This odd thing was hiding in the monkey grass like a Halloween garden gnome. I’ve since learned (because I checked with the Googler), this is a Cackling Witch Flashlight. Now I wish I’d taken it. One can always use an extra flashlight. 4. NASTINESS. Well. A leftover weenie still not eaten by the morning after—that tells you how bad it was/is. Because our neighborhood is loaded with critters. And the wrapper beside it? That contained a glow stick. A weenie on a glow stick? There’s a bad joke laying on the sidewalk. 5. RELIGIOUS INFORMATION. This may or may not have been part of the Halloween morning after leftovers, but it was on the sidewalk and I felt I should include it. When I was a kid, there was always someone in town handing out Jesus Loves You stickers or Bible verse bookmarks. And there was always the random old man handing out toothpaste, too. Now, I’m not being disrespectful. I happen to love Jesus and toothpaste, but on Halloween I want sugar. So do all the other trick or treaters. 6. TURQUOISE FEATHER. I imagine this floated from a flapper girl or peacock costume or a cute little tutu of some sort. Annabelle sniffed it and walked around with it attached to her face for half a block. A good color on her. 8. SPARKLY JEWEL. Call me Nancy Drew, but I’m thinking this turquoise jewel belongs with the turquoise feather costume. The green thing is a Spree candy… 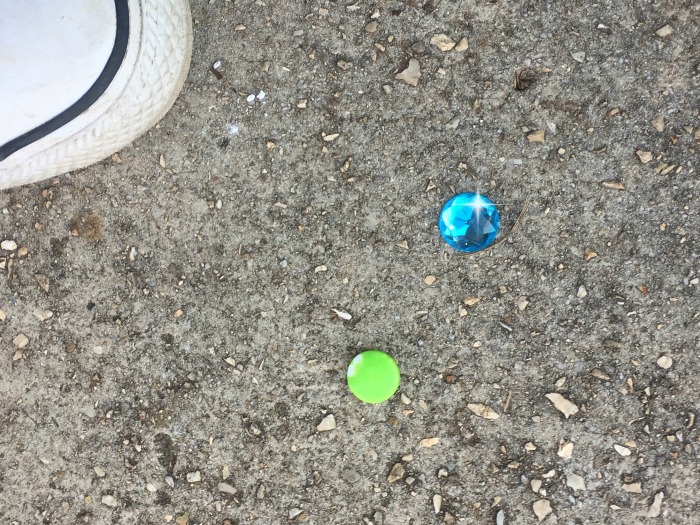 10. PURPLE BOW. No idea. Could be a hair bow or a bow tie or real portkey, but we’ll never know because I didn’t touch it. 11. PINK SKELETON GLOVE. In our own flower bed, a single glove instantly reminded me of O.J. and his glove problem, yet this one was much cooler because, you know, pink, skeleton, child-sized, and no murder associated with it to my knowledge. Whew. Seriously. We found all these items and lots of uneaten candy all on our street. Writer friends, feel free to use these items as writing prompts. Dog owners, watch for dropped chocolate after Halloween. Chocolate is poison for dogs.

[tweetthis]The morning after #Halloween. You won’t believe the things we found…[/tweetthis]