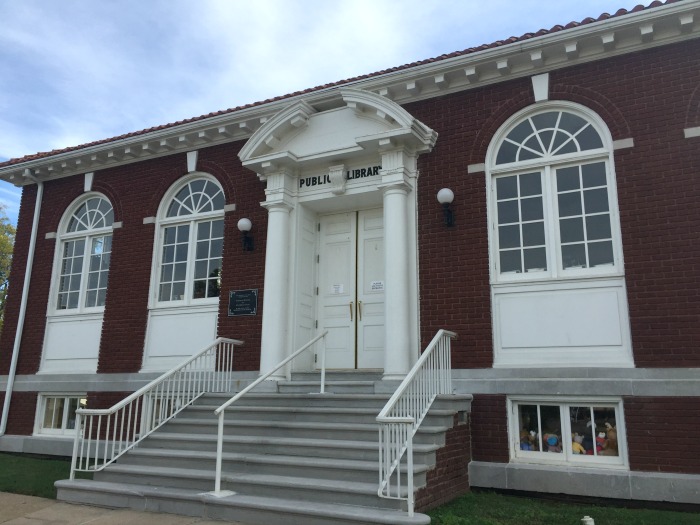 The Friends of the Conway County Library recently invited me to speak on the subject on my book and writing and whatnot. This was cool on so many levels. Carnegie Library! The Conway County Public Library in Morrilton represents half of the remaining operating Carnegie libraries in the state of Arkansas. This particular library opened in 1916, and at the time achieved the distinction of being the smallest town in America to have a Carnegie library. That a pretty special little nugget of American + Arkansas history.

Born in 1835, Andrew Carnegie was a Scottish immigrant who at one point became the wealthiest man in the United States. A true self-made man, he made his fortune in steel, and by the end of his life gave away over 90% of his wealth ($350 million) to charities and philanthropic causes, including $40 million to build nearly 2,000 libraries across the country. Carnegie brought books to the people, to remote places in American communities with no other chance of building libraries. Arkansas originally had four Carnegie libraries built in Little Rock, Fort Smith, Eureka Springs and Morrilton. If you’d like to know more about the history, fate, and current status of these Arkansas treasures, click HERE to read a related article. And P.S., the Eureka Springs Carnegie Library is alive and well. See the card catalog picture above? If libraries still used card catalogs, that open drawer would contain THE card for my book either handwritten by the librarian with a ballpoint pen or typed on a typewriter. But they don’t. And maybe, just maybe, we are a tiny bit worse off for it.

(This is where I could jump off into an entire rant-y blog post about change and how it sneaks up on us disguised as a progressive positive thing, but sometimes, over time, the consequence of small, imperceptible, seemingly inconsequential change creates a chasm so wide and deep we have no idea how we got to the new normal. And sometimes the new normal is ugly. But I won’t. I’ll stay on topic and say…)

I’m thrilled to know my book is on the shelf at such a special place. But, that’s not all. I spoke at the centennial celebration meeting. Think about it. The people of Morrilton managed to buy prime downtown real estate, secure a Carnegie grant, build a library, and open the doors in 1916. One hundred years later, I’m invited to talk about my book at the celebration party? Mark Twain said, “In a good bookroom you feel in some mysterious way that you are absorbing the wisdom contained in all the books through your skin, without even opening them.” Yes, sir, I agree. I was honored to be there. I met Brenda Cahill at the meeting. Brenda, in my opinion (and others I’m sure) is the duck call queen of Arkansas. I immediately recognized her when she walked into the library. Almost exactly a year ago, I wrote an article for the Winthrop Rockefeller Institute about her family’s duck calling legacy. Although we’d spoken on the phone, we’d never met in person. Brenda is such an interesting lady. Her unique childhood involved performing duck call routines at the Mid-South Fair in Memphis and touring with her family in Nashville!

Someone should write a book about that.

(You can read my Rockefeller article HERE.) Icing on the cake, I tell you. Thanks again to the Friends of the Conway County Library for such great hospitality. If you get the chance, stop by and visit this beautiful library. There’s much to see including rare books and great architecture. What a great piece of Arkansas history.