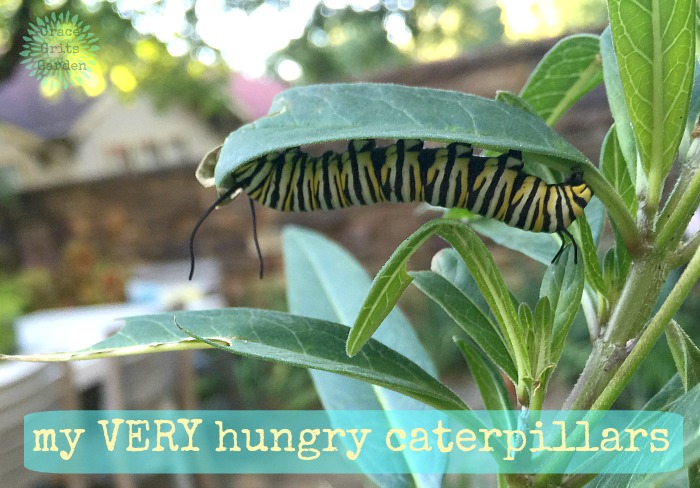 Do you remember the children’s picture book by Eric Carle titled The Very Hungry Caterpillar? Well, I have my own very hungry caterpillars, and they are so much fun to watch.  Yes, I know they aren’t really “mine”, but I’ve been cultivating a butterfly garden since we moved here, and now that they’re here, I feel the need to observe and protect them.

A couple of days ago, I spied the first chrysalis of the season. It’s attached to the rock wall beside the back gate only a yard or so from one of our milkweed plants.

Magical.
And once I find one, I become completely obsessed. Because where there’s one, more are sure to follow.

Yesterday, I found six hungry caterpillars munching away on the milkweed. You can imagine that my milkweed looks pretty ragged by now, but that’s a good thing. I plant milkweed for only one purpose—food for monarchs. And during the caterpillar (larva) stage, these guys are eating machines. They eat and eat and eat until eventually they wander off to a safe place to pupate. (I’m trying to use all the scientific words, but I’m no scientist, just so you know.)

Here’s one headed off to pupate… I wanted to follow him, but it seemed like too personal of a thing, and so I went inside and searched for him later. Apparently our rock wall is the perfect protected place for private pupating. ?

Tip: During this time of year, you have to be careful about yard work because a rake or mower can be devastating. This is not the time of year to power wash the house… They are so busy eating, they don’t care how close I get to take pictures. I’m so in awe of these miraculous creatures, barely a week old and so fragile, vulnerable, extraordinary. And now a super quick lesson. There are four stages to monarch butterfly metamorphosis—egg, larva (caterpillar), pupa (chrysalis), and adult.

Egg: A single adult monarch lays an average of 700 eggs during her two to five weeks of egg laying time. She lays them one at a time usually underneath the leaves near the top. I went on an egg search and found this one in the picture below (which isn’t very clear because I only take pictures with my iPhone, and it’s next to impossible to focus in on an egg the size of a pin head). This egg will hatch in 3-8 days so you can bet I’ll be checking on it daily. Larva: As cute as Eric Carle’s picture book is, it isn’t meant to be factual. During the very hungry caterpillar stage, caterpillars don’t eat through one apple or two pears or three plums…or a piece of cherry pie or a cupcake or a sausage or any of the things mentioned in the book. They ONLY eat milkweed. And that’s what my very hungry caterpillars are doing right now. The larval stage lasts from nine to fourteen days depending on temperatures.

Pupa:  This stage lasts from ten to fourteen days, and while it may not appear that anything is happening, the original larva cells are busy providing energy to grow new adult cells. Near the end of the cycle, the outline of wings appear inside the chrysalis. That’s a cool thing to see.

Adult:  The adult monarch butterfly emerges from the chrysalis in a process that takes a few hours. They appear weak at first and their wings are damp. I watched last year as they flitted around the backyard, typically landing on the milkweed to rest. Most adult monarchs live about two weeks, but the butterflies born now, in September and October, migrate to Mexico for the winter and live several months before the process begins again. Those of us who live in Fayetteville, Arkansas are lucky to be on the migration path.

I took these next pictures last year. Look how interesting the chrysalis is just before the butterfly emerges. One final thing: While my very hungry caterpillars are munching away on milkweed, other predators are waiting to much away on them. Check out this praying mantis I caught hanging out on the milkweed biding his time. If you see one of these, relocate him. The praying mantis is a beneficial insect, but he needs to eat elsewhere. He looks guilty, don’t you think?