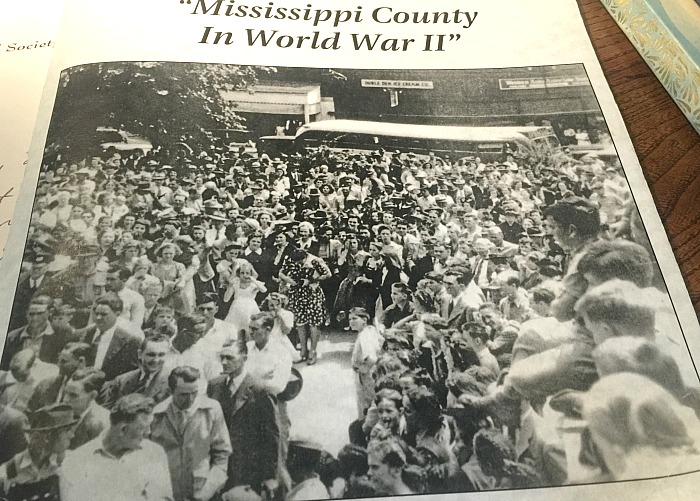 Reverend L. T. Lawrence served as pastor of the First Presbyterian Church of Osceola during WWII. The Mississippi County Historical & Genealogical Society recently devoted an entire Delta Review publication to Reverend Lawrence. Lib Shippen, Treasurer of the historical society, spent hours and hours of her time on this project. It’s special and perfect for Memorial Day. I think you’ll agree.

As local boys went off to war, Reverend Lawrence began writing a monthly letter to every serviceman, a sort of hometown newsletter which he called Hands and Hearts Across the Seas. The project grew larger as the war continued. The cost to mimeograph and mail these letters grew too. By the end of the war, Reverend Lawrence was mailing out over 750 letters a month, half to servicemen and half to family members who wanted to keep up with news. The people of Mississippi County helped cover the cost with monthly donations.

These letters are now part of Osceola history.
A part of WWII history.

Each letter includes news of the town, a joke or two, a prayer & scripture reading—heartfelt greetings from Osceola.

The boys immediately began writing back to Reverend Lawrence. Lawrence included news he received from soldiers in subsequent letters. These letters changed lives and in many cases saved lives.

Through Reverend Lawrence’s letters and responses, we have first hand accounts of not only what was happening in Northeast Arkansas (and in the U.S.), but also what was happening from our hometown soldiers’ perspectives from foreign soil. Most of these boys had never been out of Mississippi County. Many have names I recognize today. Some didn’t return.

With permission from the historical society and Ms. Shippen, here are a few excerpts.

Letter No. 1, November 1943:
Dear Friend: …We thought that some of you fellows in the armed services would be interested in a mimeographed letter from us every once in a while. So we are trying it out…Nathan Weinberg has lost a couple of letters out of his sign on the store. It now reads ATHAN WINBERG…Osceola has had an experience with gas, but it is due to the fact that they are canning turnip greens at the canning factory and the odor is strong all over this section… Seriously Speaking—A Bible verse for all of us to ponder in our hearts-“For I am persuaded that neither death, nor life, nor angels, nor principalities, nor powers, nor things present, nor things to come, nor height, nor depth, nor any other creature, shall be able to separate us from the love of God, which is in Christ Jesus our Lord.” Romans 8:38,39. Will you take your New Testament now and read the entire 8th chapter of Romans? As you read it, remember that a lot of others are reading it—I believe all who receive this letter will do it. If you do not have a New Testament, write to me and I’ll try to get one to you…

Letter No. 2, December 1943:
Dear Friend: We certainly do extend to you the heartiest Christmas greetings and we pray that a righteous and lasting peace shall come to bless the world before another Christmas seasons comes. For that you are fighting we know. Thank you!…The auxiliary of our church provided the postage for the November letters… 96 letters were mailed last month…Our cotton crop is short this year, and cotton is always the biggest news in this section. Rotarians recorded their guesses at the beginning of the season and a free lunch will be given to the one who guesses it most correctly. The guesses ranged from 137,000 to 201,000 bales… I will let you know who the winner is when we know…Our high school football team really was a credit to the school and the town. We lost several games. But the boys showed a fine fighting spirit. The odds were against them. But they never quit…

Letter No. 3, January 1944:
Dear Friend: I am going to keep as a priceless treasure the file of letters which I have received from you. Letters have come from every part of the globe – it seems – interesting letters which I appreciate very much and shall keep…The biggest news in Osceola is the Youth Recreation Center which was opened December 20th in the building opposite the Gem Theatre… the room is crowded with young people from the time it opens until closing time. The students chose to call it the Seminole Club. Some of you fellows who have been home on furloughs have visited it, of course…Recently I had my typewriter overhauled to see if I couldn’t improve the mimeographed letters a bit. For some reason or other they replaced the semi-colon, which I had been hitting for many years with 3/4. I still forget the change and frequently address a letter—Dear Friend3/4…Perhaps you have heard that Buddy Bowen was reported as missing in action on December 1st. He got the November letter of this series and reported to me by letter dated November 30th that he liked the part “Seriously Speaking”. The next day he went out on the mission from which he did not return…We all loved and love Buddy. We pray continually for him. When opportunity affords you, hit the enemy a hard one for Buddy…

Letter No. 16: February, 1945:
Dear Friend: …Last August we offered a bushel of potatoes to the one who could spell correctly my first name and Godfrey White’s middle name. I thought that no one had answered it correctly. But a boy from Cookville, Tenn., to whom I send these letters, Arnold Cameron, wrote to Godfrey and gave the right answer…Arnold suggested that Godfrey take the potatoes to Rotary Club and auction them off to the highest bidder, the proceeds to go to the expense funds of these letters….Bing Crosby returned from a USO tour overseas on a troop ship bearing many wounded American soldiers. He said—”I cried unashamedly along with them as the Manhattan skyline came into view and then the Statue of Liberty. A fellow from San Diego who had lost both legs was beside me. ‘She’s a great old girl,’ he murmured, saluting the statue. ‘She was worth every bit of it.'”

Letter No. 17, March 1945:
Dear Friend:  Please solve a mystery! Miss Marjorie Doyle of Osceola received some lovely carnations last week. The sender’s name was not given. The card bore these words: “These are for the letters I didn’t write.” Who was the sender?…The auction was held February 20th. There was very spirited bidding. Ben F. Butler outbid all the others finally and paid $12 for the sweet potatoes. But then he graciously presented the potatoes to us!…

Letter No. 24, October 1945:
Dear Friend:  So many of you write and ask what changes have occurred in Osceola since you went overseas…you will still know the old town when you get back, but it has had a sort of face-lifting…The Missco Implement Co., which purchased Cartwright Bros. Hardware, has put a new front on the store..Supt. Dean Whiteside is building a fine new home on Ermen…The Church of Christ is erecting a building across the street from the residence of Mr. Fred Patterson. Twice in the past few years the levee has been heightened, and I understand the plan is to put gravel on the top and let it be used as a roadway.

Letter No. 26, December 1945:
Dear Friend: Many of you have written and asked about our football team… 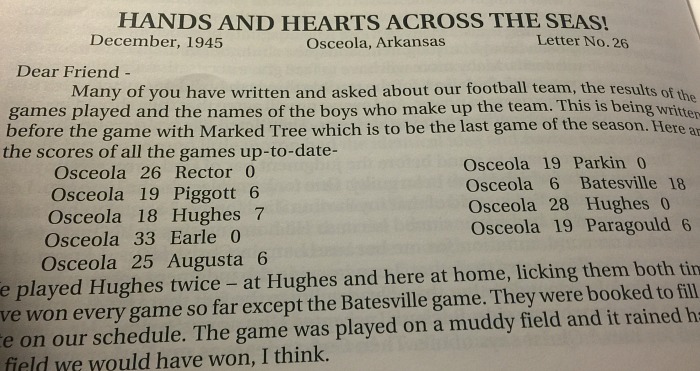 We have won every gave so far except the Batesville game. They were booked to fill an open date on our schedule. The game was played on a muddy field and it rained hard. On a dry field we would have won, I think.

These letters continued monthly throughout the war. Here are a few excerpts from letters written to Reverend Lawrence from Mississippi County servicemen:

Ralph Wilson—”Again your letter came as a very welcome gift. I doubt that if you yourself realize what an important thing you are doing—the extent of its effect upon all of us.”

Gordon Wiseman—”Your letters went across and then followed me here (Florida). I have read them more than once and have shown them to boys here at the hospital, who echo my praises of them. Please keep up the good work.”

Billie Beall—”I enjoy the letters very much. I know I speak for everyone involved when I saw it is an excellent idea. We want to hear more about home…we are fighting for the folks back home, hoping some day to resume our lives in the greatest community in the world.”

The Delta Review is provided to Mississippi County Historical and Genealogical Society members. Membership is open to anyone interested in area history. Annual dues are $25 per individual / $40 per family. Contact the society at 870-281-7583 or 870-563-6161.

Reverend Lawrence ended each letter in this fashion…

may God bless richly each one of you.
Cordially,
L.T. Lawrence