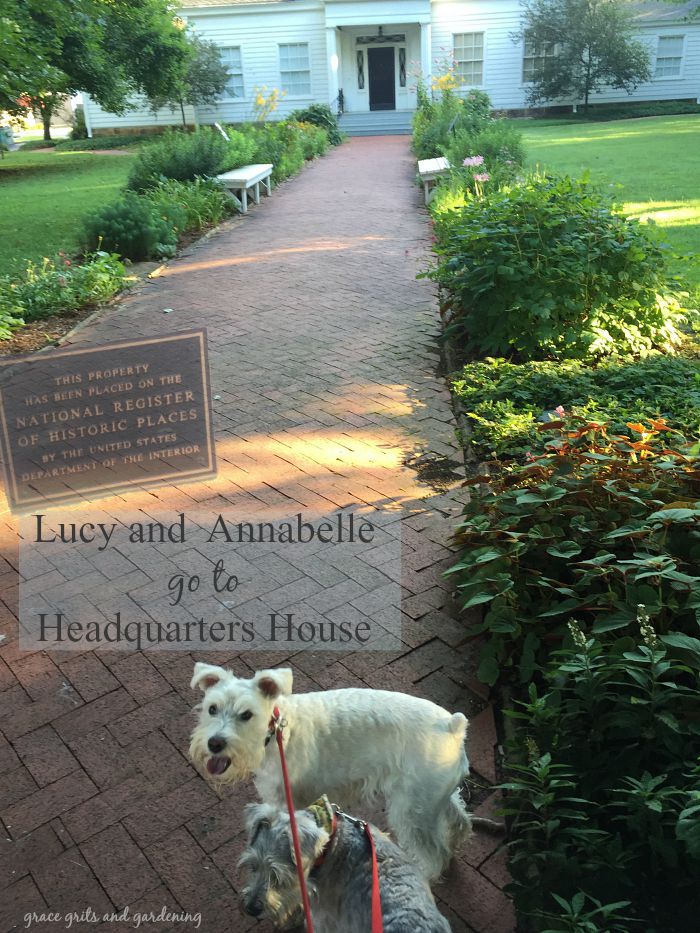 Check.It.Out. Lucy and Annabelle recently took in a little Civil War history at the Headquarters House gardens—definitely hallowed ground, my friends. This gorgeous Greek Revival home was built in 1853 by Judge Jonas Tebbetts. Tebbetts was well known in these parts as a teacher, lawyer, city leader, and Union sympathizer, the likes of which eventually landed him in jail. During the Civil War, the house served as both Union and Confederate headquarters. (Not at the same time, obviously.)

Today, it’s hard to imagine the front lawn as a primary battleground during the Battle of Fayetteville, but it’s true. The original front door (now preserved as an interior door) bears the scar of a minié ball shot. Lucy, Annabelle and I often walk through the gardens. We go early before the heat settles in, and before the house is open to the public. The trip is worthwhile solely to stroll the gardens, which look much as they did in the mid-1800s.

How do I know?

I know because Judge Tebbetts’ daughter, Marian, left behind her journal which included jottings about the garden. And based on Marian’s detailed journal, the fine group of Washington County Master Gardeners was able to design historically accurate beds with heirloom plants.

(See how important journaling is?)

The bed below is a Moon Garden—white, pale and silvery colored leaves and flowers glow during a full moon and during dusk and dawn. Historically, moon gardens added formality to early American gardens (and still do today). Can you imagine how this one looked a few weeks ago during the rare Blue Moon? The Headquarters House garden (then and now) included lots of herbs and vegetables. Whatever food was eaten was grown right there. (No Farmer’s Market on the square…) A circle of thyme. According to the extra sniffing and overtime nose twitching, Lucy and Annabelle found lots of great smells to inhale.

This small cabin behind the Headquarter’s House was the law office of Archibald Yell. Yell was a colorful public figure who served as Arkansas’ first congressman, second Governor (1840-1844), and founder of Arkansas’ first Masonic lodge. His Fayetteville home was torn down in the 1970s, but his law office was saved and moved to this location. Exploring is a hot job. Especially in the summer. And now Lucy and Annabelle are off to the beauty shop. As you can see, they need it!