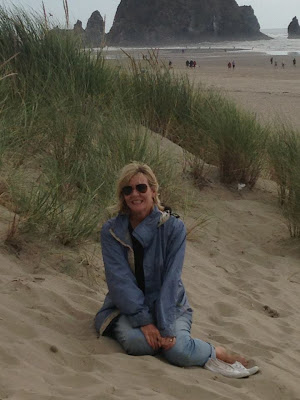 We wandered into the art studio of Richard Gorsuch, who paints from his cute bungalow just off Ocean Drive in Cannon Beach.  Instead of ferns and hanging baskets, his porch overflowed with a paint-smeared easel and work-in-process oil paintings.
He pulled us inside past his turquoise screen door, and I immediately felt at home.
With a round face, white beard and rosy cheeks, he was the Miracle on 34th Street Kris Kringle. His eyes even twinkled when he spoke of his love for art and Cannon Beach and Haystack Rock.
He moved to Cannon Beach in 1999 specifically to paint Haystack Rock. Everyday he paints the rock, in different weather, different light, different seasons. That rock is my passion, he said. And I wanted my boys to grow up running on the sand, he added. And they did. (His boys, now in their twenties, are also artists living nearby.)
It’s not been easy. We had just enough money to buy this place which was really only a shack at the time. Sometimes we weren’t sure we would survive living off our art, but so far we’ve made it. When you want something with your entire being, you find a way to make it happen.
We sat and visited with Mr. Gorsuch as though we had known him for years. We studied his paintings, the way he captured light off the tide pools, the way he painted peacefulness.
Just beyond his window, thick, thriving hydrangea distracted me with flower heads the size of basketballs, more deep purple than blue.

I wondered how he resisted painting the hydrangea. At least once.