During the holidays we spend precious time in the kitchen dicing and chopping, prepping for cornbread dressing and an assortment of sinful casseroles. For me, chopping was the most difficult part of cooking until I attended a Knife Skills Class at Central Market.
Seriously Life Changing. No joke.
If you learn the proper way to chop—and there is a trick to each veggie—you can add hours (years?) to your life.

Learning to dice a bell pepper was one of THE coolest things I learned. And yes, I am easily entertained, BUT if you have wrestled a bell pepper, attempting to remove the seedy-meaty part without it sailing across the countertop and/or without slicing off a finger, only to end up with oddly misshapen chunks, this is amazing.
Ok, ok, OK! So many people don’t eat bell peppers. First I say to you, the yellow and red ones are amazingly sweet and pack double the Vitamin C of the green ones, so give them a shot (Doug Henard) before you completely discard this veggie. Secondly, this chopping method works for tomatoes… Who doesn’t eat tomatoes? (Doug Henard?)
Rinse and dry the pepper. Be sure your knife is sharp.
This goes without saying, but I said it anyway.
Slice off both ends of the pepper so that it will stand level and upright (as if you were planning to stuff it.) 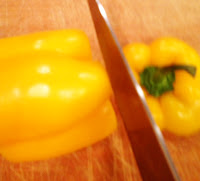 Slice vertically through one side of the pepper so that you can
lay it on its side to open it up like a book.
Now you can easily get at the meat and seeds. 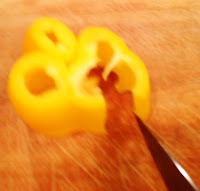 Lay your knife flat on the edge of the pepper
where you opened it, with the blade facing toward the center meat.
Carefully unroll the pepper as you firmly slide the blade
over the pepper, slicing
away the meat membrane in one piece.
(Careful of your fingers…) 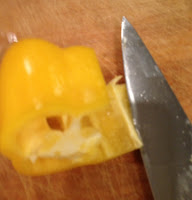 (I should have my left hand on top of the pepper,
unrolling it, but that
hand holds the camera…) 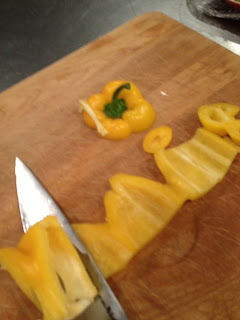 Voila!
Now you have one strip of pepper that can be divided into two pieces,
making it easier to handle. 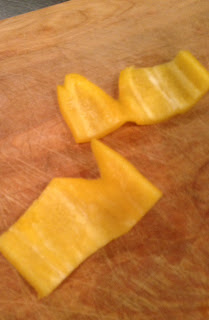 Discard the inner workings of the pepper into your compost or trash.
(This part is made almost entirely of water. If you use it in a sauce,
it will be soggy.) 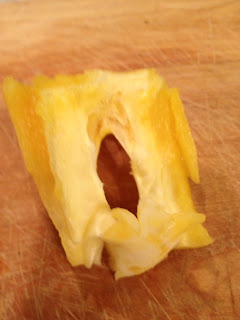 Cut the individual pieces into sticks.
(The proper word is julienne.) 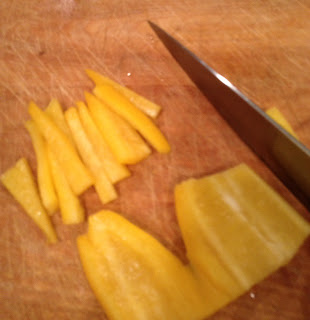 These are perfect for a veggie tray w/ Ranch dip… 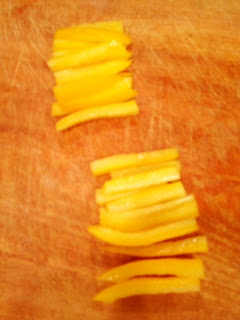 Line up the sticks and dice them. 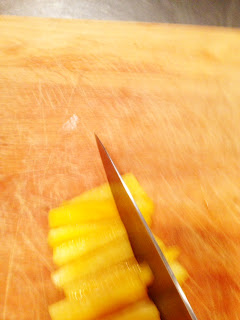 Now you have uniform diced peppers to stir fry or to top your salad. 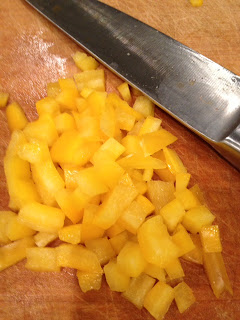