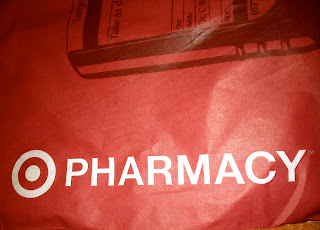 Our neighborhood Target Pharmacy is fantastic. The pharmacist is an efficient, knowledgeable, no-nonsense kind of guy, and I appreciate that. He gets me in and out and goes the extra mile when a call to the insurance company is warranted. Plus he’s bald. I like bald.

His staff of young ladies are friendly and call me by name. I like that too.
Last summer I oddly bonded with these pharmacy people due to a bizarre encounter. Like a fiery car crash on Central Expressway, everyone watched although it was nasty. Now that summer is here again, I worry that a repeat performance might occur…
On that excessive-heat-index-orange-ozone-alert-day,  I sat in one of two chairs at the end of the pharmacy counter waiting on a prescription. Twenty minutes, they told me. With a new Angry Birds Seasons already downloaded on my iPhone, I was all set.
In the other chair, a handsome 20-something Hispanic guy. He too played a game on his iPhone. We nodded to each other sharing the iPhone gaming connection. The two chairs were attached like those at the airport, our shoulders practically touching. To the average Target shopper we may have appeared to be texting each other like siblings sitting on the den couch together.

Me:     He thinks I’m pretty cool to be playing Angry Birds…
Him:   Look at that old woman playing Angry Birds!…  (but I digress)
Behind the pharmacy counter, the serious, busy pharmacist and three young employees, worked diligently with heads down counting pills and answering questions on the phone. 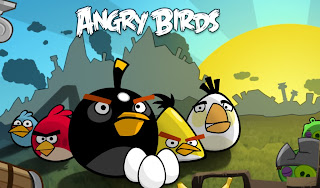 As I am pitting angry birds against fat pink pigs, I hear a ruckus building a few aisles over. Heading my direction. Our direction. Fellow Gamer noticed and looked up as well.
A GINORMOUS black woman sporting spandex and a bright pink halter came rolling a shopping cart along the end cap aisle parallel to the pharmacy counter yelling, “SCUSE ME! YOU’RE BLOCKING MY WAY!” Fellow Gamer and I both wondered who is blocking your way? She was still 4 aisles over in nail polish remover… But she pushed the cart like it was a self-propelled lawnmower, apparently on a mission. In no time she was on the flat Tory Burch heels of an unsuspecting wisp of a pale white woman, probably mid-30s. “I SAID, SCUSE ME!! YOU’RE BLOCKING MY WAY!!” Her tornadic voice boomed through the pharmacy into housewares and grocery, thawing frozen foods.

Pale Wisp jumped like a baby rabbit into the nearest aisle stammering, nearly crying, “Oh I am soooooo sorry, please excuse me, soooo sorry.” She scampered through the headache relief section and out the front door. I never saw her again.
I had a strong urge to defend Pale Wisp, but feared Mad Black Woman was wielding a knife in that barely constrained bosom. Sadly, I am only Weak White Wimpy Woman. I scanned the pharmacy area, eagerly looking for John Quinones. Did I have time to reapply lip gloss? I was certain there was a hidden camera by the blood pressure machine. Although I had failed to intervene, there was likely still time…
Instantaneously, all pharmacy aisles evacuated to accommodate Mad Black Woman’s super-sized shoulder chip and matching attitude. She BARKED to the pharmacy employees, “WHERE ARE THE FEMININE HYGIENE WIPES??!” Her voice echoed… echoed… echoed… echoed…
Silence. All around. Pin dropping silence. ‘I S-A-I-D WHERE ARE THE FEMININE HYGIENE WIPES…wipes…wipes…wipes?” repeated Mad Black Woman.
One brave young employee answered rather calmly, “On aisle 7.”
“WELL YOU WILL NEED TO COME OVER HERE AND SHOW ME! I CAN’T FIND ANYTHING IN THIS STORE!” (picture head sway / “talk-to-the-hand” motion) I think she actually stomped her hoof.
Brave employee actually escorted Mad Black Woman and her push mower to the feminine hygiene wipes.  Bald Pharmacist looked around in shock with that did-I-just-hear-what-I-think-I-heard look on his face. Speechless. Annoyed. Disgusted.
So now this woman was not only rude as hell, but everyone in Target and across the street at What-a-Burger knew she needed to wipe down her hoo haa. And she had no problem killing Pale Wisp to do so. Evidently time was of the essence.

Where was that camera?
The pink pigs and angry birds had been abandoned in my hand.
My mouth gaped.
In slow motion I looked over at Fellow Gamer.
He looked over at me.
He smiled,
shook his head
and said,
“Dallas’ finest.”

“I hate rude behavior in a man. I won’t tolerate it.” Woodrow McCall (Lonesome Dove)