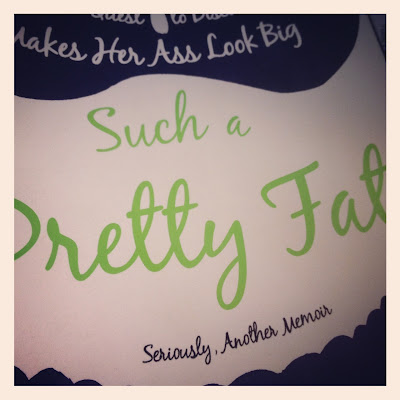 I love Jen Lancaster. Her books make me laugh out loud no matter my mood or where I happen to be – during a long day of tedious jury duty, crammed in the middle seat between two giant trolls on an airplane, at church – not that I read in church.

Yes, of course I love the classic writers such as Flannery O’Connor, Ernest Hemingway, William Faulkner, Carson McCullers. But Jen Lancaster is classic hilarity, her shenanigans on par with Lucy Ricardo.
I’m certain if Jen and I were ever introduced, we would become hard and fast friends, going to happy hour, not working out, watching America’s Next Top Model. We both wear pearls, love our dogs, and adore all things Barbie.
I went to her book signing in Dallas. She was hysterical in person, sharing stories of her girl scout days and her obsession with obtaining badges and selling cookies. I wanted to meet her, to have her sign my book, but the line to see her was wrapped around Barnes & Noble nearly out the door to Northpark Mall and down Central Expressway. Plus, Mexican food and margaritas were calling. My girlfriends and I went to dinner instead.

I have read all her books, some more than once.

My absolute favorite passage is the story of her late night on-line purchase of the Barbie Fashion Fever Grow N’ Style hair-styling head. She accidentally ordered it after a dose of Ambien which reportedly makes some people do odd things. She had no recollection of this drugged shopping spree until she came “face-to-ass” with the UPS delivery man while attempting Downward Facing Dog in her living room wearing only “yoga pants and a particularly ugly bra covered in faded pink cabbage roses.”  Opening the large box she was horrified, initially thinking someone (a serial killer) had shipped her a severed head via next day delivery.

After she calmed down she remembered “severed heads aren’t pink. With sparkly earrings. And golden blond tresses. And shimmery rose pink lip gloss.” After another Ambien evening, she awoke the following morning to discover someone “retrieved and unpacked the Barbie head” and “styled her with a big back-combed updo, black eyeliner, off-white lipstick and a Pucci-style head wrap”.

“Her shame looked exactly like Nancy Sinatra.” (Such a Pretty Fat, Jen Lancaster)

SeriouslyFunnyStuff. I know you are laughing now.
When I was home in Arkansas a few weeks ago, I went in search of my own childhood Barbie head. My sister and I had one. And everything we ever had is still there, somewhere on that property. Since Barbie wasn’t in our bedroom closet, I knew she must be in the playhouse out back, unvisited by humans for years.
Momma and Daddy built us an amazing playhouse during pre-elementary school days. Really, it was a brilliant move on Momma’s part. We had our own tiny house which kept us out of her hair and her house all day long for years. Forty-some-odd-years-later, the door to the playhouse was tied to the railing to keep it shut. As I untethered it, a wasp guarding the door buzzed my head. The floor, nearly rotten, was crawling with spiders and all sorts of bugs. Throngs of mosquitoes both inside and out swarmed my head like bees. Surrounded by rice fields, mosquitoes are plentiful.
Inside, the playhouse seemed teeny. I was Alice inside the rabbit hole after she devoured the “EAT ME” cake and grew to an enormous size, hitting her head on the ceiling as her arms poked out the windows on either side. Inside this wonderland, our miniature kitchen, a Christmas gift from Uncle Rex  looooooong ago, lined the walls still filled with tiny pots and pans and plastic play food. Kelsey and Tate “cooked” on the stove in the early 90s, Zach and Taylor a few years later.
Bravely (stupidly) I opened a box which initially startled me – it was completely filled with rats! Or, human hair! Someone had been scalped! I’m sure my reaction was not unlike Jen Lancaster’s when she thought her UPS box contained a severed head. I heard myself scream before recognizing the box was full of wigs. Somewhere in the back of my mind I remembered these were my Nana’s wigs. Why a box of wigs are being stored in the playhouse, I have no idea. Dressup? Halloween?
There on the shelf, glassy-eyed and spacey, sat Barbie’s head. A giant cobweb stretched from the shelf across her “golden blond tresses”, sadly unstyled for years. A faded beauty, her face was makeup free, lips as pale as mine. I felt sorry for her. I’m sure she was embarrassed.
I almost carried her in the house to spiff her up, but since I wasn’t drugged on Ambien or anything else, I left her behind in the time warp playhouse to live out her remaining days. She looked at home there.

“Curiouser and curiouser.“ Alice in Wonderland