The following is a guest blog by my new writer friend Tom Sweeney. Tom is from New Hampshire and writes mystery, science fiction and even a bit of romance. He is working on a series of three mystery/crime novels. 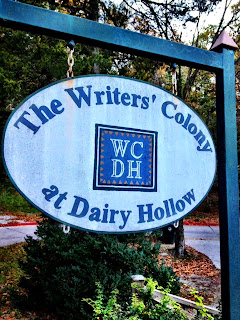 It was wine-thirty at the Writers’ Colony at Dairy Hollow--time for our daily afternoon get-together, and we residents were gathered on the deck. Writing is a solitary endeavor, hours spent cooped up in a small room, attempting with varying success to wrest that one telling detail from our resistant brains, the single apt metaphor, the bon mot that will bring our prose off the page and into life.
These gab sessions interacting with other writers are a major reason why the Writers’ Colony works so well for me.
Someone mentioned my roomie, and we all laughed. We don’t have roommates, particularly not roommates of the opposite sex as neither spouses nor visitors are allowed here at the Colony.

Then again, as I retorted, “That’s what they say, but you notice that each studio has a big double bed.”

Everyone laughed. Someone joked, what happens at Dairy Hollow, stays at Dairy Hollow…
Half a carton of wine later (and only a Diet Dr. Pepper for me), we headed back to our rooms to write. Four hours after that, following a post-dinner impromptu critique session, the two walkers among us decided to see Eureka Springs at night, so we headed downtown. 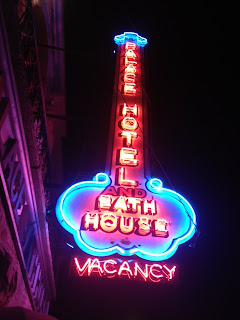 A half mile from the Colony, we turned a corner of winding Spring Street and saw the gorgeous neon sign of the Palace Hotel and Bath House. The hotel itself was an impressive granite building. We peeked in the window of the lobby and tried to open the door. It was locked, but as we turned to leave a woman appeared from behind the desk to welcome us in.
Her name was Lucretia (perfect Halloween name…) and she was the great-niece of Allen Parmer, who rode with Jesse James. Providing a tour of the hotel, she explained it was the last of many bath houses one time lining Spring Street. The hotel has its original structure and architecture intact, including magnificent woodwork and a finely detailed tile floor.
Writers, both of us, we could not help fall under its spell. Imaging what it must have been like as a Victorian resort, we each drafted a short story in our minds, stories set here at the hotel.
Writers sometimes get lost in their own reveries, though.
As Lucretia gave us a tour of one of the rooms, complete with king bed and two-person Jacuzzi, my friend turned to me and said, “Honey, we should get this room.”
I was taken by surprise but quickly realized…ah, she’s a fiction writer too…