Who’s there?
Girl.
Girl who?
Girl Who Drives With Lead FOOT!
Yes. I got ANOTHER speeding ticket. For those of you keeping score, that’s two tickets in six weeks... 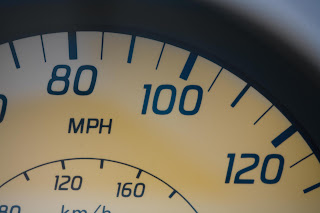 I managed to go thirty years without a ticket and now I seem to be supplying all the little speed traps in Oklahoma and Arkansas with donuts and coffee. Much like the popular adopt-a-highway program… Go ahead and put me down to sponsor Atoka and Augusta.

I collect tickets in each state like my mother collects shot glasses.

I need to stay put.
To avoid the constant highway construction between Memphis and Little Rock, I thought I would be OhSoClever and take Highway 64 from Marion to Bald Knob. As if the names themselves don’t imply this, there’s not much between here and there. Earle, Parkin, Wynne, little towns with one stop light surrounded by cotton fields begging to be picked. Towns with old water towers begging to be climbed. Towns with empty roads begging to be drag-raced.

Towns with bored yet overly zealous cops.
When you take the back roads to avoid interstate construction delays and instead spend an extra thirty minutes on the side of a ditch enjoying a speeding ticket delay, the advantage quickly evaporates.
When you have Texas tags, the cop seems extra snarky.

Lady, do you have any recent moving violations?
Ummm, maybe…. (probably not the best answer but I was smiling)
WHAT? (not smiling)
Well, I got a ticket last month in Oklahoma, but the officer said it wouldn’t go on my record.

(I was trying my best to show him I was wearing a Razorback t-shirt… IF you know what I mean.)

Rudely, he never noticed. Too much fire spewing from his evil eyeballs.

Turns out the good sooners in Oklahoma didn’t report my ticket, which is probably why I’m not in the Augusta, Arkansas jailhouse trying to make bail. I quickly did the mental math and realized maybe I should slow down.
Later, on the other side of Texarkana, I came upon a fatal car accident with Care Flight, bodies strewn about the road, and an SUV in a tree. Perhaps my ticket was a good thing.
leadfoot
Musical Pairings:
Bat out of Hell, Meat Loaf