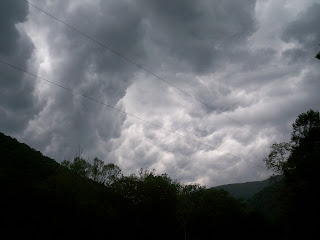 A trip back home to Northeast Arkansas would be incomplete without at least one long night of thunderstorms, complete with hail, straight-line winds and the resulting power outage.  Last night was that night for my mom and me.  As huge storms brewed in the nation’s mid-section, they roared toward the Mississippi River and our house.

We were relaxing in the den watching Dateline when we were first notified of impending bad weather.  A severe thunderstorm and tornado warning flashed along the bottom of the television screen.
These storms came up with very little warning. Living on a farm off a dark country road, we were somewhat out of touch with the world. The weather reporters became more and more animated and their maps became more and more colorful. Twirling arrows indicated possible tornadoes and tiny ping pong balls mimicked hail. They predicted an 8 in 10 chance of a tornado in our area. I was skeptical of this statistic.
We ignored the warnings. We were much more concerned with whether or not the newlywed had drowned his young cute wife, but as Dateline was interrupted yet again we realized we may never know.  I thought he was guilty. And I bet the people watching The Bachelor were plenty upset with the interruptions…

Another alert was issued with this specific instruction that spoke volumes….  “Abandon mobile homes, hide in a ditch and wear durable shoes”.  Seriously. Exact Quote. LifeInTheCountry. I looked at my bare feet as I lay on the couch under a quilt. I glanced over at my mother.  She was wearing purple fuzzy Ugg slippers. Maybe I didn’t give this weatherman with the bad comb-over the credit he deserved?  He actually knew his audience pretty well. Perhaps we should heed his warning? As the wind began to howl and whistle through the fireplace, and the interior door in the den began to shake, I saw visions of those freaky munchkins and flying monkeys.

Ok, I’m going to get my durable shoes! 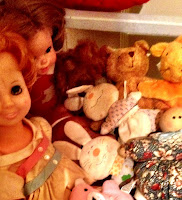 We escaped into a tiny, interior, window-less bedroom. It was cave-like. At night you cannot see your hand in front of your face. My mother converted it into a kids’ room when the grandchildren were born. It became a place to store old dolls that now had that semi-creepy appearance, old plastic jack-o-lanterns and other toys forgotten by time. In fact, it was quite possibly scarier than a tornado.

There were at least 30 stuffed animals staring at me, and it was no wonder. I was wearing a black t-shirt from my favorite pizza restaurant, gym shorts and my durable shoes. I had quickly snagged a sweater from my bedroom, along with my bright blue bra. Seriously, if I awake in our rice field in the morning, I will not be braless. It is common knowledge that reporters seek out the most pitiful and scary people to interview after a disaster – I would not be this person tomorrow morning! I also grabbed my well gnawed night guard. I simply cannot sleep without my night guard – it protects my teeth as I clinch and grind. If the house is blown away, and we are relocated to a temporary shelter at the high school gym, I will need my sleep. Plus, this small piece of hard plastic is incredibly expensive!   In the event of a disaster, I will need that money for other things. Like Wine. My mother brought her cat, into the room. Gabby knew the routine well, as she had been born in tornado alley.  She just stared at us, probably freaked out by the stuffed animals everywhere. Or by me.

After about 30 minutes, we ventured out of our “safe room” to complete silence.  Either the storm had passed or the eye was directly overhead. Do tornadoes have eyes?  Exhausted, I slept well (with the help of my night guard). When we awoke in the morning, there were several large limbs scattered throughout the front yard from the pecan trees. Water stood in the field across the road. The sky was clear and blue. We had survived another storm. I was so relieved that we had not been relocated north of the Mason-Dixon Line during the night. I’m pretty sure that’s where the flying monkeys reside.
talya

Somewhere Over the Rainbow, Katherine McPhee